The Diamondbacks extended their scoreless streak of inning to 18 19 20 21 22 23 24 25 26 27 28 29 30 31, and kept the Dodgers offense scoreless for fourteen frames of their own. But in the end, a hitter who was batting .146 for the year, and who came into the plate appearance having gone 0-for-5 on the day, dropped a bloop that dies just in front of Chris Young. That scored the winning run for Los Angeles - it's the fourth straight walk-off loss for Arizona, the most since the 1989 Tigers. I am trying to find any previous occasion when a team lost consecutive games 1-0, both of them going to extra innings; I haven't found any example of it ever having happened before.

The road-trip finishes completely bereft of victories, and runs the losing streak to ten, the third-longest in franchise history. Five of them were by one run. Details after the jump.

All hail, Edwin Jackson. He reduced his ERA by seven-tenths of a run in one afternoon, giving Arizona nine shutout frames, allowing only three hits, all singles, and three walks, with six strikeouts. He followed up Dan Haren's 127-pitch outing last night by throwing 124 pitches - perhaps surprisingly, that wasn't a career high, as he had games of 126 and 132 pitches when with the Tigers last season. However, it was still our NL-leading fourth game where the Diamondbacks starter has thrown over 120 pitches. I must look into Pitcher Abuse Points for this team. Anyway, if we had given Jackson any support, it would have been our first complete-game shutout of the year.

Instead, Edwin became only the second Diamondbacks pitcher in franchise history to pitch nine zeroes and not be involved in the decision. Oddly, it wasn't the obvious candidate - Randy Johnson - who had been unjustly robbed of a W before, but Miguel Batista. Pitching against the Giants, he allowed one hit and one walk in May 2002, and left the game with the score tied at the end of regulation. In subsequent events that will probably feel horribly familiar to 2010 Diamondbacks fans, the bullpen then allowed the winning run to score for San Francisco, without bothering to retire a batter.

Since the franchise started playing, only two National League pitchers before today had thrown nine shutout innings, allowed three hits or less, and seen their team lose. Batista, as noted above was one; Javier Vazquez also managed the feat in 2003, when with Montreal. He three-hit the Padres, but they won 1-0 in ten innings. As for today, it's another quality start, another Arizona loss. Using the "Extended Quality Start" (7+ IP, three or less ER) preferred by Daron Sutton, in the NL this season, a team getting an EQS wins 73% of the time. The Diamondbacks record in such games is now 6-9.

The offense, meanwhile, continued to be completely dead in the water. We went 8-for-47 this afternoon, with one walk and no extra-base hits. Stephen Drew and Justin Upton each managed a couple of hits - Upton getting the sole free-pass of the days. But Kelly Johnson and Ryan Roberts combined to go 0-for-12 at the top of the order, and it's hard to get anything going in the face of such a lack of production. We were hitless in seven opportunities with runners in scoring position, three of them going to Young. We completed the road-trip having scored a total of seventeen runs in the nine games.

Though the bullpen were tagged with the loss in this contest - Cesar Valdez just not quite capable of getting through his second inning of work - this was definitely one of their better performances. Aaron Heilman pitched a scoreless tenth, despite a lead-off double, and Carlos Rosa was excellent, retiring all six batters he faced, with three strikeouts. He is looking like he might have been a decent pick-up by the team: in 7.2 innings of work, he has allowed six hits while striking out seven, a 3.52 ERA. It was a one-out wild pitch in the 14th by Valdez that was crucial - the subsequent ground-ball to second might have been an inning-ending double-play, but the runner was instead on third.

Still, the way the offense has been producing, this would simply have delayed the agony. It's good to see Dan Haren and Jackson getting back on track, but this has been countered with an offensive implosion. You don't expect to win every time when you score less than five runs, but in the 2010 National League that has been enough to see you to victory about 28% of the time. The Diamondbacks' record in such contests? 1-27. It's almost getting to the point of being eerie. 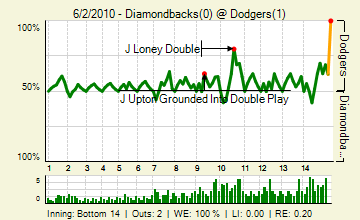 This has got to be some kind of record. Our pitching staff combined for a total of +76.6% of awesomeness - and we still lost. That would be because our hitters combined for -126.6% of suckitude. Like I said yesterday, the slogan for Diamondbacks' baseball needs to be, "Well, at least it's interesting." The three games in this series alone have been undeniably fascinating to follow, even if the end result has been depressingly familiar every time.

The sheer length of the game certainly helped pad the comments total - one dreads to think what it might have been like if it had been an evening contest [hey, as the designated recapper, I'm pretty glad this 4:16 contest didn't start after 7pm! It seems most of the team's uberlong contests are afternoon games] The 40 commentors in total is pretty close to a record, I think. DbacksSkins was back with a (sunburned) vengeance, posting 183 - wailord also got into three digits, with kishi in third place.

And so, back to Chase we come, with an off day tomorrow and then SNAKEPITFEST on Saturday, with what is rumored as the possible debut of Dontrelle Willis... At least the home-stand can't go any worse than the road-trip. Can it?