Diamondbacks 0, Dodgers 1: If I did have a tumor, I'd call it Juan

Share All sharing options for: Diamondbacks 0, Dodgers 1: If I did have a tumor, I'd call it Juan

Dan Haren threw a career high 126 pitches over 8 shutout innings. Unfortunately, it didn't matter. The offense only managed four hits - six base runners total - and Juan Gutierrez voided any chance of a win by allowing a walkoff homerun to Matt Kemp in the 10th inning. More losing streak information after the jump...

There really isn't much more to say. What can we say? The D-Backs finally get to see their ace performing up to expectations only to see the offense support him with four hits. Aaron Heilman puts up a goose egg in the 9th inning only to see Juan Gutierrez allow another walkoff homerun. Well, you know, at least we're not Cleveland, Houston, or Baltimore, right? That should cheer you up. Then again, the Pirates have a better record than us... maybe I should just stop.

The game featured John Ely and Dan Haren dueling through the first seven innings. The D-Backs didn't get a hit until the fifth inning when Rusty Ryal kept our hopes alive. Rusty then ran to second after a wild pitch and reached third as Russel Martin's throw to second was errant. With our first opportunity to strike, Chris Snyder hit a measly groundball to end the inning. The game continued to cruise with both offenses struggling to get in rhythm.

Things got slightly interesting in the bottom of the 7th when the Dodgers got Russel Martin to hit a leadoff single. Jamey Carroll tried to bunt him over but Haren made the quick throw to second and got him out. It looked fairly innocent until Drew and Martin starting jawing at each other to the point where the benches cleared. The replay showed that Martin drove his leg up in, what appeared to be, an attempt to spike Drew. Chris Young came dashing in to confront Martin but things settled down relatively fast and the situation never escalated.

The interestingness continued into the bottom of the 8th when Conor Jackson hit a smoking line drive to leadoff the inning. Then something crazy happened. Chris Snyder bunted and Jackson advanced to second - next up to bat, Dan Haren. How many times has that ever happened? In the last few years, we've been treated to quite a bit of interesting plays and calls. From the infamous 4 out play, to A.J. Hinch being torn apart by an umpire, to a walkoff balk, and now a position player bunting in front of a pitcher in a 0-0 game in the 8th inning. Unfortunately, the experiment failed and the D-Backs ultimately were unable to make anything happen.

The game rolled on as Aaron Heilman pitched a scoreless ninth inning despite giving up back-to-back singles. A.J. Hinch then decided to go with Guti in the 10th, and the recap can pretty much end there. Matt Kemp hits a homerun and the losing streak goes to nine. Juan Gutierrez has the worst HR/9 of ALL TIME in a season for pitchers having pitched 18 innings or more. Mike Lincoln is 2nd with a HR/9 of 4.35 in 2000. In the last three games our starters have pitched 22 innings, and allowed four earned runs, for a 1.64 ERA; we have lost all three games. At this point, I don't even think St. Penelope can help us.

While the fangraph claims that the winning moment of the game was the M Kemp Home Run we all know that it was really J Gutierrez enters game. That's what did us in. 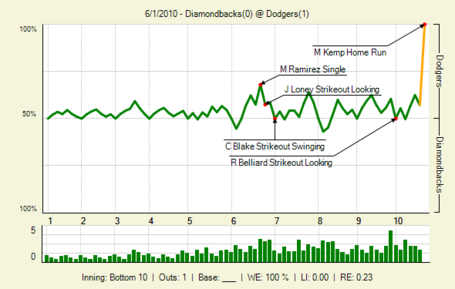 I was hoping my first comment award would come with more joy but this one was kind of slim pickens.

It might be taken out of context but it sure is true. Juan Gutierrez could have allowed a grand slam and it wouldn't have made a difference. The D-Backs only managed four hits.

So we look to end the skid, again, as we try to avoid a sweep, again, tomorrow in midday at 12:10 PM MST. We'll see a matchup of Edwin Jackson (3-6, 6.03) against Carlos Monasterios (2-0, 2.20). Jackson has been pitching much better as of late while Monasterios will be making his third career start. Hopefully the offense can get back on track and light up the rookie.