Share All sharing options for: Diamondbacks 6, Tigers 5: 15th verse, not the same as the 1st

Or, probably more likely, continue our relentless climb up the charts of losing road streaks.

I'd like to draw your attention to the above quote used by Jim to end last night's recap. Oh, ye of little faith -- or did Jim reverse jinx our team tonight? No, the score listed above is not a typo. The Dbacks actually found a way to WIN A FREAKING GAME on the road. That's right -- 14 straight road losses, goodbye. Streak over. Dead as a doornail. Details after the jump.

A good start from Edwin Jackson in his homecoming, along with a couple HRs, and a bullpen member who bent but did not break: it's a nice recipe for a win, wouldn't you say? Yes, it's very nice when everything falls together exactly the way we would hope, and that's generally the only way we've been able to win this year -- get a decent start from your starter, minimize the use of the bullpen, and slug the **** out of the ball.

E-Jack pitched 7.2 strong innings against his former club, yielding just 3 earned runs, on 9 hits and 2 walks. An error on Reynolds in the first, one of two Markflubs on the day, led to an unearned run in the first. However, Jackson escaped from a first and second, no out situation, without anymore damage. It wouldn't be the last time.

In the second, Chris Young reached second on what was scored (in a pretty unfair decision, IMO) a two base error by Tigers LF Brennan Boesch, and after an Adam LaRoche flyout, Special K slammed his 16th homer of the year for a 2-1 Dbacks lead. In the bottom of the inning, naturally, the Tigers tied it up, on a walk, wild pitch, and single, but Jackson escaped without any more damage. Montero singled in a scoreless top of the 3rd, but E-Jack got his first 1-2-3 inning in the bottom. In the 4th, back-to-back singles by LaRoche and Reynolds were wasted when Gerardo Parra bounced into a double play, his 5th of the year, and Chris Snyder struck out. I suspect this DP was the reason Parra ended up with only a 4.4% WPA on the day, despite a big hit later in the game...

E-Jack got another 1-2-3 4th, and after a 1-2-3 top of the 5th, E-Jack gave up a leadoff double to Ramon Santiago, ending his streak of 9 straight batters set down in order. Luckily, in true Diamondbacks fashion, the Tigers failed to bring him home, since Don Kelly, Johnny Damon and Magglio Ordonez went  popout, groundout, groundout.

The 6th inning was the one that won the game for the Diamondbacks. Montero led off with a homer, breaking the tie, Chris Young had a deep flyout to CF, and LaRoche doubled on what looked like it might also leave the park. After Mark walked, Rick Porcello was clearly not fooling anyone, and Jim Leyland went to his bullpen, though Porcello was only at 85 pitches. Leyland went to his awesomely-named Taiwanese LOOGY, Fu-Te Ni, against whom lefties had only a 68 OPS+ against this season, to pitch to, of all people... Gerardo Parra, who we all know sucks against lefties. Somehow, Parra laced a triple down the RF line to make the score 5-2, for his first EVER extra base hit against a left-handed pitcher. Blind squirrel, meet nut. (No, Alfonso Soriano, we're not talking about you. You can stop jumping up and down now) Still, if it's a sign that Parra's improving against lefties, that would be FANTASTIC.

Leyland went to Enrique Gonzalez, another former Dback, (we all know how much Detroit loves former Arizona pitchers) who allowed Snyder to sac fly Parra home, then proceeded to pitch 3 straight innings before giving up a hit to his former team. The Tigers answered back in the bottom with 1 of their own, on 3 singles. Score: 6-3, and our ugly streak of complete innings without a lead ended at 41.

A double play from The Justin Upton erased a Stephen Drew walk in the top of the 7th, but the Tigers came back with another run on a Damon double, ANOTHER error by Mark, and a groundout. Fortunately, with 2 outs and Ordonez at 2nd, an E-Jack wild pitch went by Snyder yet fortuitously bounced straight back to him, and Ordonez was caught trying to advance to 3rd. So, I guess it's nice to know that we're not the only team who runs into outs.

E-Jack got two quick outs in the 8th, on a groundout by Brennan Boesch and a strikeout by Carlos Guillen, but gave up a single to Brandon Inge. AJ Hinch went to his newly-anointed closer, Aaron Heilman, who got the third out of the 8th, despite a wild pitch.

In the 9th, after 2 quick outs, Gonzalez walked Kelly Johnson and Drew, but an Upton single was nullified when Boesch was able to throw out Johnson at the plate for the third out. On to the bottom of the ninth, score 6-4.

In his first save situation as our closer, Heilman didn't exactly make it easy. He was given a two run lead and ended up giving one back on a one out single and two out double. With American League Triple Crown Leader Miguel Cabrera at the plate, Heilman was able to strike him out on a 1-2 foul tip on a changeup to end the game in dramatic fashion. Heroes for Arizona included Reynolds, who went 2-3 with a walk and a homer, (and, of course, a strikeout) LaRoche, who went 2-4 with a double, Upton, who went 2-5, and Miggy, who went 2-4 with a homer, and is still batting .405 on the season. Our middle infielders went a combined 0-7 at the top of the order, but with 3 walks, and Parra had only one hit, but it was a doozy. 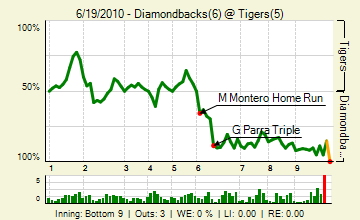 someone sacrifice a chicken

to end this curse

Poster neilback stepped up to the plate in the 9th with that one,  which was extraordinarily fortunate, as the only other "greened" comments to that point had been posted by yours truly.

Tomorrow, in the rubber game of the series, (wow... how great does it feel to have a rubber game on the road??) the Dbacks send Ian Kennedy to the mound against his trade counterpart and former Dback, Max Scherzer. Let's try to win another 13 straight on the road, shall we? First pitch is at 10AM, so don't get too drunk tonight celebrating the win.