Share All sharing options for: Diamondbacks 5, Tigers 7: A Tale of Two 2010 Closers

I miss Papa Grande. While there's no denying 2007 was a horrifically nerve-wracking season, when it came to the ninth inning, Jose Valverde got it done. You can't argue with 47 saves and a 2.66 ERA. Oh, how I long for those days - we just didn't appreciate them enough at the time. Fast-forward to now, and the pitcher who started the year as the closer for the Arizona Diamondbacks has been dropped from the ninth-inning - but on this evening's showing, one wonders how long he'll be seeing any high-leverage situations at all.

For Chad Qualls allowed two runs on three hits and a walk in the eighth, and took the loss as Arizona dropped their fourteenth straight game away from Chase Field. Qualls seemed to have taken the change in his role hard, and his body language was bad almost from the beginning. When he issued a one-out walk, you could visibly see his shoulders drop; the runner moved to second on a groundout, and then came home as the next three batters all got hits off Chad. Looking at him on the mound this evening was an infinitely depressing experience: he just seemed like a broken man.

It has now been 36 straight frames since the Diamondbacks last held the lead at the end of an inning. As in the entire Boston series, we never did any better than tied tonight, though some credit is due to the offense for digging Arizona out of a 4-0 hole after two innings. Dontrelle Willis was not impressive this evening, particularly early on: in those front couple, he walked three batters (two of whom came around to score), allowed three hits, all for extra-bases and threw a wild pitch. Though he calmed down some what after that, the final line of five runs, all earned, in five innings on five hits and four walks, was less than acceptable, even for a #5 starter.

The hitters managed to get things even by the middle of the fifth. Miguel Montero had his first home-run of the season to get us started in the fourth, and then an RBI single by Stephen Drew, and a single by Chris Young which drove in two runs, tied the game up again, and got rid of Armando Galarraga, who was far from perfect on this evening, but escaped with a no-decision. However, the Tigers took the lead again, in part thanks to a dubious play by Tony Abreu, who was starting at third: though scored an infield hit, it could plausibly have been charged as an error, and once more, that runner came round to score.

Another RBI single by Drew tied things up in the sixth, but that was the end of the Arizona offense: eleven of our last dozen batters failed to reach. Drew, Upton and LaRoche each had a pair of knocks on the night, as we once again managed to lose while getting more hits than the opposition: Montero and Kelly Johnson each had a hit and a single, and Blaine Boyer produced a good relief outing, allowing one hit over the sixth and seventh (helped by a nice double-play started by Augie Ojeda). He has allowed one run over 5.1 innings, on three hits since his return, a great improvement over the nine in 4.2 immediately before he was sent down.

Positives from this? Well, at least we're not Pittsburgh fans - the Pirates lost their twelfth straight today. Not 12th on the road: just twelfth straight, a streak which has only been beaten five times by an NL team since 1985 [one of those times, of course, being the 2004 Diamondbacks who lost 14 straight]. They're on pace to lose 106 games. Mind you, the Orioles are on pace to lost 118. So, in that light, we are not so bad. The race for the first-pick in the 2011 draft - the Anthony Rendon Sweepstakes - starts here! 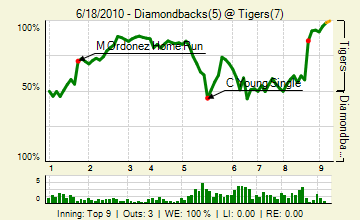 Hey, man
You got your vuvuzela set to "mild annoyance." You want to crank that up to maximum.

We'll see if we can get 'em tomorrow. Or, probably more likely, continue our relentless climb up the charts of losing road streaks.