And Arizona leaves Boston with their tail between the legs:  not just swept, but not having led at the end of any one of the 27 innings played at Fenway in the series. Oh, they had their chances - the Diamondbacks actually were ahead in the middle of the first, third and fifth innings this evening, but were unable hold on for three outs on any occasion, and the Red Sox went ahead for good in the sixth. It marks the thirteenth consecutive loss for the Diamondbacks away from Phoenix - a streak of road futility which has been surpassed only once in the National since the team came into existence, when the Nationals lost 16 in a row from late 2008 through the start of 2009.

Details of where we now rank in the historical record after the jump, and other gloomy numbers.

Longest NL losing streaks on the road since 1952

Here's a couple of lines which largely sums up why this series sucked:
Boston's DH: 5-for-9, four walks, two home-runs, four RBI, four runs
Arizona's DH: 3-for-10, one walk, no home-runs, no RBI, no runs
I'm utterly with Crash Davis, and in favor of a constitutional amendment outlawing the designated hitter [Astroturf has more or less taken care of itself, as far as baseball is concerned, since Bull Durham came out] It's probably a good thing that I hardly saw any of the series, with all three games being more or less out of reach by the time I got home from work.

This one started brightly enough, with Miguel Montero doubling home Justin Upton in the first. However, the Red Sox came right back against mediocreHaren, tying things up on an RBI ground-out. That set the pattern for the first half of the game. We took the lead in the third, Chris Young giving us the lead with a single; but Boston immediately struck back, on a two-run shot, after a Mark Reynolds error had extended the inning to get the Designated Hater to the plate. We scored in the fourth, Kelly Johnson driving in the run there to level the score, and then went ahead for the third time in the next frame, with another Montero double again scoring Upton.

But, as usual in this series, that lead lasted about as long as Boston's appeal to neutrals after they won the World Series in 2004. The Red Sox then went ahead by scoring two runs in the sixth, chasing Dan Haren from the game after 5.2 innings. His final line: seven hits, three walks and a hit batter (setting a season high for free passes by Dan), while striking out four, leading to six runs, four earned. Esmerling Vasquez tidied up, then pitched a scoreless seventh. But Aaron Heilman, in his first appearance since being anointed closer, allowed three hits and a walk in the eighth, leading to a pair of runs. As I said in the GDT. "Meet the new closer, same as the old closer."

We actually out-hit Boston over the course of this one, but they had more extra-base hits, and more of them also came with runners in scoring position. The Red Sox were helped by stealing three bases against Montero, though he did succeed in nailing one. That's been a rarity for the Diamondbacks: oipposing base-runners have been caught only 18% of the time against Arizona, compared to league average 27% - it's also a drop on last season's number of 24%, so is more evidence that our catchers have been defensively challenged this year.

Twelve hits in total for us, with Young and Drew getting three of them each, while Montero and Gerardo Parra chipped in with a couple apiece. Upton walked twice and scored on both occasions. However, Mark Reynolds was a painful 0-for-4 with four strikeouts, meaning he has whiffed thirteen times over the fifteen at-bats since his last hit, a double in the opening inning of the final game against St. Louis on Sunday. The most painful was the one in the seventh, where he came up with the bases-loaded and the tying run in scoring position, worked the count full, then stared at strike three on the eighth pitch of the at-bat. 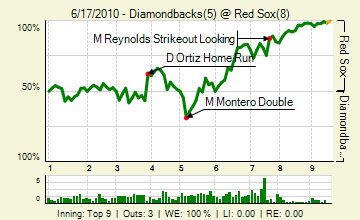 Jdub220 was the most prolific commentor, ahead of justin1985 and I'd like to welcome promising newcomer "Vuvuzela Brrrrrrrrt", who finished third... Also taking part in the thread: Zephon, Azreous, Jim McLennan, kishi, pygalgia, blank_38, VladHammer, Wailord, DbacksSkins, ,emilylovesthedbacks, Rockkstarr12, Clefo, Amit, hotclaws, Aaron622, katers, 4 Corners Fan, i'moscar.com, Bryan J. Boltik, DBacksUA, Turambar, RED SOX are #1 in my heart (whom I suspect, for some reason, was probably a friendly visiting fan...) and AJforAZ. Comment of the thread? I'm going with this one (edited for length) from 'Skins

Can somebody PLEASE tell the booth that we do NOT want to hear them gushing about the opposition's stadium, crowd, or team, WHILE WE'RE ON THE VERGE OF GETTING SWEPT BY THEM. Darron claims he "wishes we could play more games here". Ya know what? I DON'T.

If I don't see Boston again this decade, it'll be too soon. Not that I exactly saw much of Boston this series, for reasons discussed above, but you know what I mean. At this point, I'd be entirely happy for Fenway to be torn down and replaced by a modern facility. Perhaps with a retractable roof and a swimming pool in right-field.

On to Detroit. And better things, if only because they can't get much worse.