The Diamondbacks headed into tonight's game against the Red Sox looking to avoid making some bad history. Having already lost 11 straight on the road, they faced the tall task of having to do so against Jon Lester, and while Rodrigo Lopez has contributed more than we could have asked to this point, it was still something of a mismatch. Sometimes baseball games have surprise endings or take a roller coaster ride to get to their endpoint -- this was not one of those games.

After a quiet top of the first for the boys in red, Boston took a lead before some fans had even found their seats. Scutaro led things off with a little flare into center for a base hit, and Pedroia immediately cranked one over the Green Monster for a quick 2-0 advantage. Lopez then walked Ortiz and appeared to be a little shaken, but fought back to get three outs without any further damage.

Arizona responded right away. Young continued his hot hitting with a double into the left-center gap, and one batter later, Justin Upton jacked a homer of his own into left, tying the game. Ryal followed with a single, but was quickly erased on a double play.

From there, the D-backs managed next to nothing off of Lester. The only time they threatened was in the fourth, when a Young walk, Montero base hit and Upton walk loaded the bases with one out. Good opportunities against good pitchers are something you have to capitalize on to win -- and it was telling when Ryal and Snyder were unable to bring in any runs. Otherwise, Lester faced just two over the minimum in the rest of his seven innings -- a leadoff walk and a HBP that he easily worked around. Since losing his first two starts, Lester is 8-0 with an ERA just over 2. Considering Josh Beckett's disappearance this year, I'm not sure there's any doubt who Boston's ace is.

Lopez did his best against Boston's powerful lineup, but his best was simply not up to snuff. After a relatively easy second, Pedroia and Ortiz reached to start the third. Lopez got Youkilils and Martinez, but couldn't close out the frame, giving up an RBI double to Drew and an RBI single to Beltre. Facing a 4-2 deficit against a locked-in Lester, the outlook wasn't too bright.

The Red Sox tagged on two more in the seventh off Lopez, with Ortiz singling and promptly being driven in by Youkilis on a home run, again with two outs.

Though that was it for the scoring, there were other storylines at play. For one, Sam Demel made his big league debut, and had a strong inning. He worked through the law agency of Drew, Beltre and Cameron with relative ease, punching out the latter to end the inning. Took just 13 pitches to do it, too. The trade of Conor Jackson was thus declared to be the best thing ever -- until we realized that Conor was 2-for-3 with a walk and a run scored leading off for the A's tonight. Ah well. Demel received the postgame interview, which was a pleasant switch from having to put up with someone from the winning side. He also had Snyder hang on to his strikeout ball for him. Welcome to the bigs, kid.

Other interesting note: Montero and Snyder were both in the lineup thanks to the DH. Montero had a hit and a walk, meaning he's still hitting over .400 for the year (start the watch!). Snyder...well, let's just say he didn't fare as well. 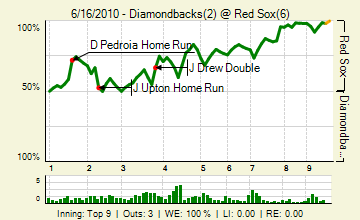 Despite my disdain toward the vuvuzela phenomenon (say that three times fast -- and while you're at it, do it to the tune of Manna Manna), the comment of the night goes to Clefo, because kishi's two green comments don't make much sense out of context and I already blamed soco.