Diamondbacks 3, Red Sox 6: The Class Rendition! (or the worst recap ever)

Share All sharing options for: Diamondbacks 3, Red Sox 6: The Class Rendition! (or the worst recap ever) 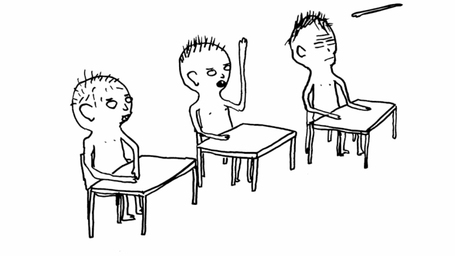 The D-Backs lost but that doesn't mean we can't have some fun with it, right? Right? I don't really know what's going on, but I'm going to try something a little bit different so bare with me. I missed 75% of today's game because of packing/moving so I've decided to try something new for tonight's recap. It's up to you to grade the performance today. This is the INTRO TO INTERLEAGUE PLAY class. Doesn't sound interesting to you? You're probably right but it won't matter because I'm the one doing the recap. Muahahah!

On to the jump!

So presented before you will be the syllabus and a grading sheet. Use it to grade the performance of today and we'll see how it goes. Hopefully it goes better than how I think it will...

It is important to note that this course requires a lot of patience. Although the Diamondbacks have been playing better of late, we have to remember that they are entering interleague play and will face some of the toughest teams in the American League. For this particular course, you will also need great pitching. Boston is renowned for their bats and you will need to beware of the longball. Additionally, the D-Backs strive to create a productive environment for all students. Students need to be advised, however, that the Diamondbacks do have a tendency to disappoint a lot of us.  Adopted through the Administrative Regulation approval process on June 15, 2010.

Grading is based on the outcome of the game, WPA, and individual stats.

Tip: * Check all recaps for a full review of what happened and how you think you might evaluate the game. PACE YOURSELF. This is your duty! Make it a good one. Here are the values and stats from fangraphs.com along with the fangraph and a brief, brief, brief recap. 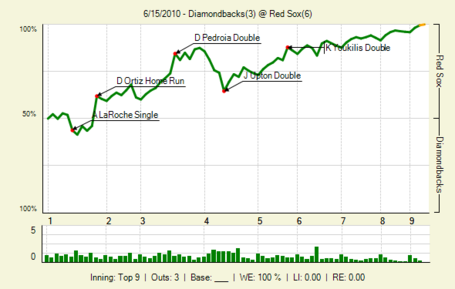 The D-Backs jumped on the scoreboard first to start the game. Stephen Drew singled, stole second, and then scored on an RBI single by the newly discovered Adam LaRoche. Adam is now tied for 15th place in the NL with 41 runs batted in - he's also only three within 8th place Mark Reynolds. Miguel Montero continued the inning after Kevin Youkilis let a groundball go through his legs. It was his first error of the season. Unfortunately, Chris Young struck out to end the inning and the Diamondbacks only managed one run. The Red Sox would make them regret it.

Boston answered quick with a two-run homerun by David Ortiz. The D-Backs would trail the rest of the game. Boston would tack on a few more runs in the bottom of the third as Ian Kennedy struggled to find the strike zone. Two wild pitches and a walk helped contribute to the melee as the Red Sox took a commanding 5-1 lead.

Arizona battled back to make the game interesting as Justin Upton knocked down a two-run double but it was not enough. So that's about it guys. Sorry for such a disastrous recap. This whole moving thing is pretty hectic. Now on to the all of that rollcall nonsense!

A mild GDT with 876 comments (1/4 of which were vuvuzela related) with the top three being the only ones to break 100+. Jdub220 ended up in first place just barely beating out DbacksSkins. justin1985 wrapped up the bronze trophy while the rest of the cast consisted of; katers, Wailord, Zephon, 4 Corners Fan, Rockkstarr12, luckycc, emilylovesthedbacks, kishi, BattleMoses, Clefo, hotclaws, Vuvuzela Brrrrrrrrt, venomfan, Bryan J. Boltik, i'moscar.co (thanks for not breaking it this time!), skoormit, AJforAZ, unnamedDBacksfan, and blank_38

Only one comment ended up green without the use of a picture and for that, I commend you kishi...

"Sorry, man, you ain’t got the mustache, you don’t earn the name."

Same time and same place tomorrow as Rodrigo Lopez continues to draw some unlucky matches. We'll see a matchup of Lopez (2-5, 4.45) against Jon Lester (7-2, 3.18). Lopez gets slotted for the start instead of Dontrelle Willis and we'll hopefully get to see him receive his first win since May 15.