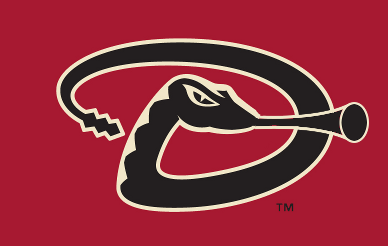 This afternoon was a classic 2010 Diamondbacks effort: early lead, too many men left on the basepaths, late inning bullpen shenanigans, and a win after scoring at least 6 runs.  In a game that maybe even only two weeks ago the Boys in Sedona Red would have found a way to throw away was instead turned victorious by the mighty bat of continually resurgent Chris Young.

The Diamondbacks were facing off against Chris Carpenter, who was luckily not his normally dominant self.  The home team tagged him for two quick runs in the first, and from there never saw a deficit.  Kelly Johnson led things off with a single to center; apparently all he needed to rediscover his swing was to get out of May, as he’s hitting a full 40 points better.  Conor Jackson and Stephen Drew weren’t able to get anything going, striking out and flying out to left, respectively, and it seemed Johnson was in danger of being stranded at first.  Mark Reynolds and Adam LaRoche were to the rescue, though, and their back-to-back doubles scored two runs to give Edwin Jackson an early lead.

And any other day it would be more than enough for his fourth win of the year, because the young pitcher was dealing.  The Cardinals couldn’t even get a runner in scoring position until the fourth inning, on a Albert Pujols walk and advancement on a fielder’s choice, but he was left by his lonesome when traditional Diamondbacks bogeyman, Randy Winn, struck out.

After a fantastic effort off Carpenter in the first inning, it seemed the D’backs were on their way to rout of the Cardinals.  Carpenter isn’t the ace in St. Louis for nothing, though, and kept the Diamondbacks from even getting anyone on base through two outs in the fourth.  I remarked in the GDT that, "the window to score off Carpenter might be quickly closing." I have never been more glad to be wrong.  Chris Young stepped up in the bottom of the fourth with two outs and launched a home run into left-center, giving the home team a 3-0 lead.

For the next two innings, the two teams would trade frames of offensive ineptitude, with both teams getting a man on third but failing to score.  Something had to give, and in the top of the seventh, Edwin did, just a little.  Felipe Lopez started things off with a two-out single, and advanced to third on a Chris Rasmus double.  Aaron Heilman was called on to stop the bleeding, but Heilman is as Heilman does.  Pujols is robot from the future, built for these situations, and he was more than up to the challenge.  A double cut the Diamondbacks’ lead to 3-2.

The Diamondbacks tried to extend the lead immediately in the bottom of the seventh, with Drew being brought home by a LaRoche single, who in turn was brought home off a Miguel Montero double.  Welcome back, Miggy!  5-2.

Heilman made things a little frightening in the eighth by putting men on second and third with two outs.  He worked his way out of the jam, though, and all seemed fairly safe.  The Diamondbacks surely couldn’t blow a three run lead in the ninth, could they?

Chad Qualls was brought in, and he didn’t look right from the beginning.  Lopez immediately doubled, and then Qualls showed his inability to field as well after juggling the ball at first to allow Rasmus to get on after a weak grounder.  Pujols was up, and of course he scored Lopez on a single to close the lead to two.  Qualls finally got an out, by forcing Holliday to fly out to center, but then turned around and gave up an RBI single to Number One Menance, Randy Winn.  That was it for Chad, and Vasquez was in, but that damage was already done.  And of course Vasquez immediately allowed a run in off a wild pitch.  Tied game.

By this point we’re practically rioting in the GDT, and a smattering of boo’s has started at Chase Field.  Although Vasquez was able to end the inning without giving anymore damage, there couldn’t be a lot of confidence amongst the fans watching.  It didn’t get any easier as Reynolds struck out for the fourth time in the game, and LaRoche grounded out.  Two outs, with Miggy and CY coming up.  Miggy singled, and a faint flame of hope was lit.  CY stepped up, dug in. Could he do it?  He took a strike, only looked at it.  And that’s all he needed, because on the very next pitch he slammed a home run again to left center, the hero for the game, and series. 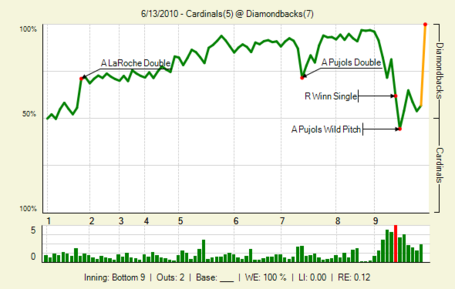 Although the crowd at Chase Field was characteristically quiet, those of us in the GDT were in full World Cup mode, and we tooted our vuvuzelas to victory.  We managed to surge past 1000 comments, no doubt in large part to our frenzied horn playing towards the end.  Four people went over the triple digit mark, with myself leading the pack (200+), and Wailord, hotclaws, and Jdub220.   Also joining the celebration: soco, snakecharmer, katers, Wailord, kishi, Rockkstarr12, blank_38, Wimb, Clefo, Muu, Jdub220, hotclaws, Jim McLennan, emilylovesthedbacks, 4 Corners Fan, mrssoco, DbacksSkins, luckycc, Zephon, Bryan J. Boltik, zeusmith, justin1985, skoormit, Dallas D'Back Fan, SongBird.

Comment of the night was the Photoshop by Wailord, which is featured as the picture for this story.  Good job integrating the vuvuzela into the Diamondbacks' logo, and racking up 9 rec's in the process!

Tomorrow is a welcome day off for the Diamondbacks, who take three straight series wins/ties to Boston on Tuesday.  There are certainly still problems with this team, but they seem to have at least turned it around a little.  Probable pitchers for Tuesday are Kennedy for Arizona, and Buchholz for the Red Sox.  First pitch is 4:10pm our time, so be sure to be here for all your Diamondbacks coverage.