It's funny how a team which was so startlingly inept offensively could look so good, less than 24 hours later. The Diamondbacks produced four homers, including a pair by one of last night's goats, Adam LaRoche, and cruised to an easy victory over the Cardinals at Chase Field. Dan Haren celebrated Dan Haren Bobblehead Night (not to mention Rockkstarr12's birthday!) by pitching eight strong innings, allowing only two earned runs and notching his seventh victory of the season.

Haren was immaculate through the first four innings, retiring the first 12 Cardinals. After a lead-off double down the left-field line in the fifth ended his bid for a perfecto or no-hitter, he hit a bit of a speed-bump, with the shutout first going, and Haren then loading the bases with one out before he got former D-back Felipe Lopez to pop out to shallow left, and then got a fly-out to end the threat. A lead-off homer in the fifth completed the Cardinals scoring for the evening, and Haren then retired nine of the last ten batters faced. He finished with a line of two runs in eight innings, on six hits and no walks, striking out nine. Aaron Heilman pitched a scoreless ninth.

Haren not only produced on the mound. Dan also went 2-for-3 this evening, raising his average to .425. That's the best number of any player in the majors with forty at-bats this season. Not the best batting average of any pitcher - the best of any player, at any position. The only other person above .375, is Buster Posey, who went 0-for-4 for the Giants this evening, to drop his BA to .396. Indeed, maybe we should trade Haren to an American League team so he can keep his record in such things. Because .425 is a number reached for a season by only six players in the past sixty years, none of them even reaching fifty at-bats for the year.

He wasn't alone in having his hitting boots on. Mark Reynolds drove in a first inning run, scoring Stephen Drew with a double. He and LaRoche then went back to back in the third, Chris Snyder got his ninth long-ball of 2010 in the fourth, followed later in the frame by RBI doubles from Johnson and Drew, and LaRoche capped the night off with his second shot, to right-center, in the fifth. 12 hits in total for the Diamondbacks, including eight for extra-bases. Reynolds had a three-hit night, his first since April 25th, while LaRoche, Snyder and Haren each got a couple - Drew had our only walk of the night, to add to his hit. Runs > Left On Base = a great improvement on last night.

However, it wasn't all good. Justin Upton was dropped to the seventh spot in the order, but it didn't really seem to have an immediate effect, as he went 0-for-4 with a pair of strikeouts. He now has 87 for the season, five in front of Reynolds for the major-league lead - no-one else currently has more than 73. In the thread, Dallas D'back Fan was wondering, "Have teammates ever held the #1 and #2 spots on the k/season all time record?" Yes, but not since 1965, when Dick Allen and Dick Stuart of the Phillies were the top two, with 150 and 136 respectively. Upton and Reynolds would seem to have a good shot at matching that.

Still, a significant improvement on the previous evening: a crisp, well-played game by Arizona in most aspects. It's definitely the kind of performance we want to see more of as Hell Month continues, and if we can win tomorrow, that'd even our record for June to 6-6. Mind you, as it's Chris Carpenter vs. Edwin Jackson... Not exactly what you would call a foregone conclusion! 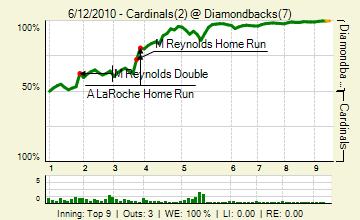 Saturday night and we all seemed to have better things to do than sit in our parents' basement talking to Internet people [Welcome to Blogger Cliche 1.0.1!] 'charmer led all posters, narrowly ahead of You'veBeenBannedFromAzSnakepit, who may be adopting a less... "guilty" name shortly, with hotclaws in third. Also present: 4 Corners Fan, katers, Rockkstarr12, Jim McLennan, kishi, Dallas D'Back Fan, Clefo, emilylovesthedbacks, blank_38, Jdub220, Wailord, unnamedDBacksfan, Zephon, mrssoco, justin1985, Azreous, marionette, Cardscrazy247 and MidnghtDrgn. Comment of the night went to Dallas D'Back Fan - he actually the only two which were turned green - for this comment on Haren's performance:

Oh, and while we are talking about our pitching-staff... In case you missed it in the GDT - and going by the attendance, you probably did - Brandon Webb threw off the mound today, for the first time in quite a while during his rehabilitation. Speaking afterward, Brandon said:

"I’ll have a light day and a heavy day, and today was supposed to be where we crank the intensity up. It felt fine, it felt good. They said it looked more comfortable and I felt more comfortable than I had in a while. I think we’re moving in the right direction. Any little progression that I can take away from each day that I throw feels really good. I feel better about everything. I’m happier and everything like that. It feels miserable to not be moving forward or doing anything progressive. Now that we’ve been doing that, it’s good to see some progress."