The Arizona Diamondbacks and St. Louis Cardinals begin interleague play by playing each other in the only NL game of the weekend. The Cardinals come in having been swept by the Dodgers and throw a young rookie who hasn't lost in a month, but Diamondbacks starter Rodrigo Lopez has had good numbers against St. Louis. But it was once again Arizona's lack of offense and three pitches in the 7th inning that led the Cardinals to a 5-2 win over the Diamondbacks.

The Cardinals took an early lead on Lopez in the 3rd inning. Two doubles scored the first run in the form of Matt Holliday, but Lopez's throwing error allowed Skip Schumaker to score from third on a single to center. Between the 3rd and 7th innings, Lopez settled down nicely. He retired 16 Cardinals in a row until two outs in the 7th. It started innocently enough when Schumaker barely beat out an infield single. After Yadier Molina singled on the next pitch, Brendan Ryan yanked a 3-run home to left field. In the span of three pitches, all with two outs, St. Louis took a 5-1 lead and put this game out of reach.

And what were the Diamondbacks doing all night? Well, they were stranding baserunners - 16 total team left on base, 31 if you sum it up individually. This started off a good conversation about what it means to 'strand' a baserunner and what official statistic is used by Baseball Almanac. The NL record is 18; the ML record is 20; and we had 16. It was ugly. Arizona had at least one baseunner in every inning courtesy of either a base hit or a fielding error from St. Louis. They also drew 8 walks throughout the evening. Their futility is best shown in a bullet list.

I don't know if I can really do justice to all the baserunning blunders made tonight. Kelly Johnson getting picked off at the top of a run-scoring inning was a bad start. Mark Reynolds should have been on second base in the 7th inning on a ground rule double but the umpiring crew did not get the call right; he should have been on second regardless, but it looked like his hamstring was clearly bothering him. And Adam LaRoche had two chances to score in the 9th inning - he was being waved home by Bo Porter from first on Snyder's double, but he stopped at third base, and later did not try to score on a wild pitch. I am interested to see what the reactions are to his actions, though he was 2 for 4 with a walk and accounted for the only two RBIs of the game.

So, once again we were treated with a fairly solid outing from Rodrigo Lopez, though the line score won't show it. The bullpen (Vasquez and Rosa, tonight) each pitched a scoreless inning to keep the team in the game. But the offense continues to fail in both the little and the big situations, and in the end, it cost Arizona a chance at victory. 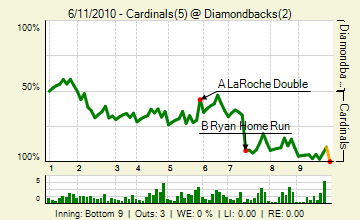 It was a fairly quiet gameday thread tonight, even during the times it seemed like we might score. I took the roll call shortly after the game ended, and Dallas did a terrible job at bribing me to re-run it. DbacksSkins beat Wailord by a tally of 100-99. All present were Wailord, You'veBeenBannedFromAzSnakepit, DbacksSkins, Dallas D'Back Fan, 4 Corners Fan, BattleMoses, Rockkstarr12, katers, Spaghetti_Monster, emilylovesthedbacks, unnamedDBacksfan, snakecharmer, soco, hotclaws, Clefo, Zephon, blank_38, mrssoco, Muu, Jdub220, Taskmaster, Bryan J. Boltik, and Cardscrazy247.

Oh come on
People who extrapolate conclusions from LITTLE information is what the internet is based around!

Dan Haren faces his former team tomorrow night on a bobblehead giveaway night. You HAVE to win on your bobblehead night.........right?