Dontrelle Willis is an anagram of "Wild Reel, Lost Nil". And that's an accurate description of this afternoon's outing: in four innings, Willis gave up six walks, balked twice and threw a wild-pitch. However, he allowed a respectable two runs in those four innings; even if it took him exactly one hundred pitches to get through those four frames, he left the game with the score tied.

And then Cesar Valdez happened. I didn't realize it was "turn back the clock" day at Chase, but his was a bullpen performance redolent of the failures we saw throughout April and May. With a little help from Blaine Boyer, he allowed five earned runs and obtained a cast-iron lock on the God-Emperor of Suck title for the day, while retiring just two batters.

Or so we thought... Details after the jump.

Here's how the first inning went for Atlanta. Walk, fly out, balk, wild pitch, double-play. Seven strikes, fourteen balls, and a scoreless inning for the D-Train. Having sat through every wobbly moment of Saturday's excursion, it was clear Dontrelle was adopting the same approach today. The second inning was actually relatively clean - just one walk - but in the third, he became only the second pitcher in Diamondbacks history to balk twice in a game. The first was the Big Unit, in April 1999, against the Phillies. I have to say, it would need to be a brave umpire to call that one: "Yeah, Randy, you balked. Again." Willis was also the only NL pitcher to do it this season [Mark Buerhle did it in the AL, and got tossed for complaining]

Still, it was another zero, and the Diamondbacks then took the lead in the fourth - Conor Jackson doubled home a run, and another scored on a Braves' wild-pitch, to give Arizona a 2-0 edge. However, our starter's Matrix-like ability to avoid trouble just couldn't last: he walked the first two batters faced, then threw a wild pitch, and both men ended up scoring. Willis did then get out of a first and third, one out jam with no further trouble, but that was the end of his afternoon. Four innings with only three hits allowed, which is good, and three strikeouts  - it's just the other stuff, such as the six free passes, that were the Jeff Goldblum-sized fly in the ointment.

After today, when people want to describe a man-made disaster caused by incompetence, they'll perhaps say, "It was like Cesar Valdez," rather than the Exxon Valdez. He retired just two of nine batters faced, as the Braves batted around in the fifth inning, getting five hits off Valdez, and adding a couple of walks - the last one was delivered by Boyer with the bases-loaded as he "rescued" Valdez, eventually getting the final out. Boyer added a scoreless sixth and then something momentous happened: Juan Gutierrez was not scored upon. That hadn't happened in an appearance by him since May 23rd. Hey, we take our triumphs where we can find them...

7-2 down at Take Me Out to the Ballgame? This one was over. However, the Diamondbacks offense, largely absent of late, stepped it up, with two runs in the seventh, including Chris Young's tenth of the year, and then three more in the eighth. They came home courtesy of a bases-clearing double by Kelly Johnson: the game was now tied at seven, and the Diamondbacks had victory in their grasp. After all, the team were 29-0 when scoring more than five runs, an unbeaten streak that stretched all the way back to last August.

And then Chad Qualls happened. We might have thought Cesar Valdez was bad, but at least he retired two batters while giving up five hits. Qualls allowed five hits while getting just one out. All singles, but that was enough to get him tagged with four runs, including the one which scored on a sacrifice fly after he had been ignominiously yanked from the game. The High-Priest of BABIP took another pounding with the Braves batting 1.000 off him there - the out he did record came on a strikeout, so doesn't count for BABIP purposes. His ERA is now back up to 7.77, and the overall bullpen ERA for June, which came in at a decent 4.03, has now ballooned to a more-usual 6.26.

The Diamondbacks did their best to make a bit of a fight of it, getting the tying run to the plate with one out, thanks to a single and a couple of walks. But Rusty Ryal and pinch-hitter Chris Snyder both struck out against Billy Wagner. The game therefore ended in the same result expected at the half-way point, except taking a roundabout route to get there. Not a great day for the pitching, who gave the Braves 25 base-runners all told, on sixteen hits and nine walks - one short of the season high (the 17-3 clubbing by the Brewers). On offense, Johson, Conor Jackson and Justin Upton each had a pair of hits, Mark Reynolds walked twice, and Young had a walk in addition to his homer. 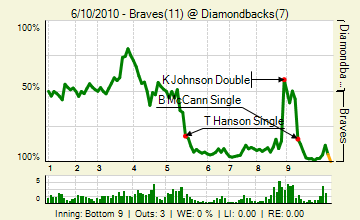 Johnson joins the rare club of Diamondbacks who got over +50% in a game we lost, but even he couldn't withstand the amazing vortex of suck which was Qualls and Valdez. Their combined line: 1 IP, 11 H, 1 BB, 9 ER. Ouch. Just shy of a thousand comments, with Jdub220, Wailord and DbacksSkins top of the chart. Also present: Rockkstarr12, kishi, skoormit, pygalgia,  katers, emilylovesthedbacks, snakecharmer, hotclaws, Jim McLennan, Muu, Jargamus Prime, Bryan J. Boltik, BattleMoses, Clefo, Scott Howard, Sprankton, blank_38, SeanMillerSavior, SenSurround, Turambar, dbacks4life, Azreous, venomfan and S.Fry. Comment of the day? I'm going with the most Rec'd:

Also,
I think the ERAs in today's ledger go a long way to explaining why Atlanta is in first and we are not.

So, we split the series: could have been worse, I guess. Next up as the Month From Hell rolls on, are the St. Louis Cardinals, and we are the only NL teams not involved in interleague action over the weekend. Stay tuned in about 30 minutes for a prescheduled socopost, and tomorrow morning, we'll be asking What's Up With... Conor Jackson.