This had all the makings of a snoozefest. Seven innings of no scoring, yet the game labored on at a mind-numbing pace. Repeated wasted opportunities with runners in scoring position. Some weird guy chatting with Jack Magruber on Fox Sports. All of that changed in the eighth inning, however, with one of the strangest plays we've seen in a while -- and that's saying something, given the state of Diamondbacks baseball in 2010 so far. Luckily, since the players involved are largely okay, we can talk about it without hushed tones.

More information about the wild ride after the jump ...

Not much to talk about in the opening frames. Both pitchers faced the minimum in the first, Kennedy using a double play to erase a one-out walk. Back-to-back walks got Kennedy in trouble in the second, but thankfully the first was issued to Brian McCann. He was unable to score on a base hit that loaded the bases with one out, and Ian got McLouth to strike out before retiring the pitcher to get out of the jam.

It was mostly smooth sailing from there, with Kennedy setting down the Braves in order in the third, fifth and sixth. Nearing the end of his outing, he had to work out of one more situation in the seventh with runners on the corners and two out, but he struck out Prado on his 114th pitch to put another solid start to bed.

Unfortunately, he still had absolutely no run support after seven innings, an unfortunate trend lately. As mentioned by Jack Magruder in his live chat with Jim, Kennedy has now gone eight straight starts giving up three runs or fewer, and all he has to show for it is a 2-2 record with four no-decisions. Those numbers from that span look like this:

Impressive stuff. You know, if you enjoy being a cellar-dwelling team.

Why was there a 0 for the Diamondbacks through seven frames? No, it wasn't because Parra was starting. Simply put, the team failed miserably in RISP situations. Here's the Reader's Digest version for those unwilling to relive the torture:

Yes, in case you're wondering, that IS as abysmal as it looks.

But in the eighth, everything changed. First, our best reliever in 2010 (insert joke about "smartest politician" or "manliest boy band" here), Aaron Heilman, gave up a pair of doubles to Heyward and McCann to ruin the scoreless tie. However, Arizona responded in the bottom half. Reynolds was hit in the arm by a fastball to start things off. Hinch called for a bunt even though he never ever calls for a bunt or a stolen base, and Young dropped it down successfully to move Reynolds over. Parra stepped in, he of the barely-.600 OPS before tonight, and drove a ball into the gap in right-center. And that's where things got...

McLouth and Heyward converged on the ball at the same time, with Nate having covered a ton of ground to get to that point. Neither communicated all that well, and the result was a pretty horrific-looking collision that allowed the ball to drop (see above) and left McLouth on the ground in pain. All the while, Reynolds scored easily, and Parra was motoring. The eventual relay throw in was a second or two too late, and just like that, Parra had an inside-the-park home run and Arizona had a 2-1 lead. McLouth would eventually leave the game, but seemed to be okay given the circumstances; he was listed as having some headaches afterward and was under observation.

Yes, the Diamondbacks followed with a pair of walks to threaten for a valuable insurance run, then promptly wasted those baserunners, but they wouldn't need any extra runs, right? Chad Qualls was coming in!

And when he started the ninth with a leadoff walk, I'm sure fans everywhere were thrilled. You know, that special kind of thrilled where your legs are numb and everything tastes purple. However, he struck out Cabrera and Conrad and got Prado to hit a routine groundout to short, and just like that, a save! A win! A bizarre situation not going against us! You may start screaming now. 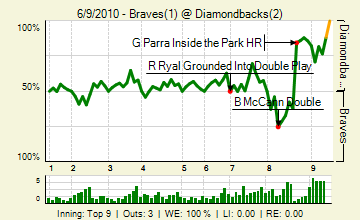 It's late and I've been here almost 11 hours, so we need a Comment of the Night that fits this wacky day and wacky game's ending. As such, we have this gem from BattleMoses:

LOL my GF just asked me if it was halftime.

Series finale tomorrow, the conclusion of a four-game series. I don't even know who's pitching, to be honest. I'm sure it's very interesting. Good night.