There's nothing I can say. In my last recap, I wondered how low this team could go. I didn't think that things could get much worse than that 12-1 drubbing at the hands of the Giants. But they have. A two-run error blew the Diamondbacks' lead in the eighth innings, and then a walk-off balk... I'll repeat that, a walk-off balk gave the Dodgers the victory, and sent Arizona spiraling to their eighth consecutive defeat.

Put a fork in the season. It's done. Details after the jump

Where to start? Where to start... Let's begin with the fact that the dismal defeat gives Arizona 20 losses on the month, something which has only happened three times before in franchise history. Here's the full list:

Initially, it didn't look like that was going to be the case, as the Diamondbacks tattooed Billingsley in the first two innings, getting four hits, including three homers and four runs. Kelly Johnson got things going with a lead-off double to start the game, and Justin Upton then bounced one the opposite way, off the top of the outfield wall and into the bleachers for a two-run lead before we'd made an out. Then, in the second inning, the two Chrises both went deep, with solo shots that were a good deal more certain. 4-0 up in the middle of the second? We'll take that, for a start.

Unfortunately, that wasn't a start, it was the end of the productive offense. We managed only three base-runners the rest of the night, and only two at-bats with a runner in scoring position - nothing came from either of them. The peripherals for the offense were entirely rotten: we struck out 13 times and got no walks. Since 2003, only two teams in the National League have done that in a game and still won - curiously, the last time was by the Diamondbacks, who beat the Giants 5-3 in July 2008, despite a K:BB ratio for the evening of 15:0. But that's very much the exception, rather than the rule.

The Dodgers clawed their way back into it, getting single runs in the second and third. The third saw Rodrigo Lopez get out of a jam with runners on the corners and one out - he snared a liner back to the mound, and then easily flipped the ball back to first to get the runner there. Lopez largely shut the Dodgers down after that, with only one Los Angeles base-runner being allowed from that point through the end of the seventh inning. I was pretty nervous the deeper we went into the game, because the third time through the order had been a nightmare for Lopez. Opponents had a line of .352/.392/.648 the third time through, but tonight he was fine...

And then the eighth inning happened...

Lopez got the first two outs: Rafael Furcal then reached on a ball stopped by a diving Drew, just not in time to get the runner. A double down into the left-field corner put men on second and third, and brought up Andre Ethier, in his first game back, with his broken pinky finger still healing. He hit a hard but playable ground-ball to Kelly Johnson who easily flipped it to Adam LaRoche on first for the final out. I'm sorry. That's what should have happened. Instead, he kicked the groundball around for a bit, then when he finally picked it up, rushed his throw and whizzed it out of the reach of a despairing LaRoche, barely 20 feet away. Both runners scored. Tied game.

Ok. We're still level. We can win this, right? Oh, I forgot - these are the 2010 Diamondbacks, who can't win a game to save themselves when they score less than six runs. After a scoreless ninth for Arizona, the first two reached against Esmerling Vasquez. However, an insane bit of base-running got the man on second caught in a rundown; the trail runner moved up to second, and then advanced to third on a ground-ball, the second out of the inning. One more big out to get. And then... And then... Let's just quote the AP recap: "Second base umpire Tim Tschida signaled balk after some frantic gyrations by Blake and Dodgers third base coach Larry Bowa. Blake removed his helmet and jogged home." I'm no expert, but both Daron and Mark were certain it was the right call.

Congratulations, Diamondbacks. You managed to do something almost that never happens. From what I can find out, this was only the thirteenth walk-off balk over the time for which we have full play-by-play accounts, starting in 1954. To put that into context, over the same period, there have been fourteen perfect games, starting with Don Larsen's in the 1956 World Series, and ending with Roy Halladay's last week. So, we got to see something ever rarer than a perfect game. With perfect irony, the batter who got to trot home the last time it happened was... Kelly Johnson, playing for the Braves in September 2008.

Lost in all this was a really good outing by Lopez, who deserved a much better fate. In eight innings, he gave up two earned runs, on six hits and a walk, reducing his season's ERA to a very respectable 4.31. So, another quality start, and another loss - the Diamondbacks are now 9-14 in 2010 when they get a quality start, when in the NL overall, that gets your team the win 60% of the time this year. It's also another late defeat for Arizona. If only we were playing Little League, and ending the game after six innings - for the Diamondbacks' record is a respectable 23-25 at the end of the sixth, with four contests level. And here's tonight's Fangraph 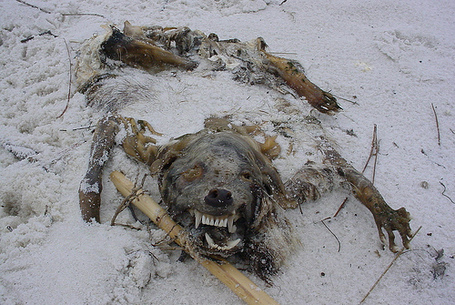 Comment of the night... Well, there were a few green candidates worthy of mention, but I've gone for the one which went up, basically at first pitch, and now takes on an eerily precognitive quality.

We now know exactly what fresh hell this is. I'm sitting here eating what was supposed to be celebratory cheesecake, but instead it tastes like chalk. I don't think I have seen a game lost by such basic, blatant incompetence in a very long time. This was just an embarrassment - and one broadcast nationwide on the MLB Network to boot. I don't know what the answer is, but things had better start changing, and changing soon, or we might have to adopt the suggestion in the thread, and all wear paper-bags on our heads at SnakePitFest next Saturday.