Diamondbacks 1, Brewers 6: "Violence is not the answer. Except when dealing with our bullpen."

Share All sharing options for: Diamondbacks 1, Brewers 6: "Violence is not the answer. Except when dealing with our bullpen."

So fleet are the opportunities for victory, and so swiftly they are gone, like a passing fancy in the morning haze, post slumber. No, it's not Shakespeare, but it is as close as you're going to get. The Brewers completed a sweep over the Diamondbacks this afternoon, outscoring us in the series by a margin of 26-6. The Diamondbacks almost managed to comeback, but an inexplicable base-running blunder left the tying run on third, and Esmerling Vasquez - 0.1 IP, 4 ER - drove a stake through the heart of any chance of a comeback.

Fortunately, some excellent beer - Scots ale, woohoo! - and good company managed to numb the pain of this one, but sheesh... Getting swept at home by the Brewers? Ouch. Details after the jump. Coherence sold separately.

This was the sixteenth time an Arizona starter has thrown a "quality start" this season - that means, six or more innings and three or less earned runs. Last year in the National League, that resulted in a win for your team about two-thirds of the time (66.4% of the time, to be precise). But the Diamondbacks' record over such games in 2010? After this afternoon, it's now 6-10. I think it's safe to say that the starters are really not the problem on this roster: while Kennedy may have got the loss today, our starters' ERA is 4.82. Not brilliant, but compare it to the bullpen ERA of 6.95, which is the worst in the NL by a run and a half.

No: the rotation in general, and Ian Kennedy in particular, are absolved from much criticism. Kennedy is looking more and more like the golden nugget in the three-way deal with the Yankees and Tigers, pitching seven innings and allowing two earned runs, to reduce his season ERA to 3.48, He allowed six walks and a hit, while striking out five, but showed some startling poise. The highlight, drawing loud sustained applause from those at EdbiggheadFest, was the sixth inning, getting out of a second-and-third, no outs jam: fanning Vege-man, followed by a foul-out to the catcher and a groundout. Six seasons of Kennedy = a good thing.

At that point, Arizona were in a 2-0 hole, and the bats continued stone-cold: we didn't get a hit out of the infield until two outs in the bottom of the sixth. Then, an Adam LaRoche single cut the margin in half: while a Mark Reynolds flyball ended the threat, we came back in the seventh, after a Chris Young single and a Stephen Drew double. However, Bo Porter inexplicably put up the stop sign on Young as he rounded third: he stopped, then Porter gave him the green light, too late. Young ended up on third, Drew got caught in a rundown, and was tagged out. It was, according to Hinch, "A bad play." No kidding. Porter needs to be taken out back and pumelled senseless.

Instead of the go-ahead run in scoring position, and no outs, we had a man on third and one out. Naturally, we failed to get the run home: after a walk to Chris Snyder, pinch-hitter Rusty Ryal popped out, and Kelly Johnson flew out. "Momentum" may be one of those intangibles, but you just sensed it shifting to set up camp in the Milwaukee dugout, and the failings of Esmerling Vasquez proved the point. With one out, he allowed a single, a walk, and then back-to-back home-runs. Our bullpen has now allowed twenty long-balls in 90.2 innings. That's over 50% more than any other NL outfit's 'pen (Brewers and Nationals are both on 13).

So, through a mix of Porter and Vasquez incompetence, we went from a tied-game to 6-1 down, in the space of about five minutes. Any hope of a last-ditch comeback - as we did in the famous matinee against the Brewers a few seasons ago - evaporated as Tony Abreu hit into his second 1-2-3 double-play with the bases-laded in consecutive games, ending the contest. That tagged poor Kennedy with the loss, but the offense continues to blow chunks. Drew went 3-for-4, while Young, Conor Jackson and Snyder each had a hit and a walk: Drew's double was the only extra-base hit of the afternoon for the D-backs. 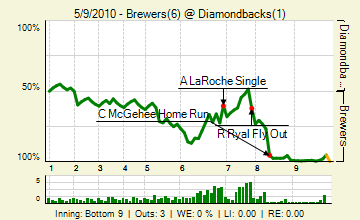 The GDT was, it appears, not quite as...weird as the last couple of days, with even some literary debate on the merits of George Orwell's 1984 - can I recommend the BBC TV version with Peter Cushing as Winston Smith? That adaptation kicks serious ass. Though there was some argy-bargy regarding Dallas Braden's perfect game: I should point out that the rule about not mentioning these does only apply to the Diamondbacks, and others are thus perfectly fair game for discussion. Though I'm not sure about pre-deletion tallies, 'charmer pipped soco 179-177, with 'Skins in third and Dallas D'Back Fan cracking three figures. Also present: unnamedDBacksfan, , Rockkstarr12, emilylovesthedbacks, Wailord, kishi, pygalgia, Clefo, hotclaws, ol Pete, 4 Corners Fan, justin1985, Zephon, brian custer, Muu, piratedan7, BattleMoses, skoormit and Azreous.

Meanwhile, massive thanks to Matt and his crew for the hospitality this afternoon: I had a great time, hanging out, drinking some excellent home-brew and talking smack about...well, a lot of things. I was teling someone - I forget who - about the cool footage from the inside of Texas Stadium getting demolished: here is the link. Fun though it may certainly have been, the defeat sends the D-backs to the cellar in the NL West once again. The good news is, the marginally-less sucky Dodgers are the next to show up at Chase, so we can propel ourselves out of the cellar by our own volition. That'd be nice.