D-backs 3, Brewers 17: "Cesar hath wept. Ambition should be made of sterner stuff"

Share All sharing options for: D-backs 3, Brewers 17: "Cesar hath wept. Ambition should be made of sterner stuff"

Today was the first anniversary of AJ Hinch being named manager of the Diamondbacks. However, it was a day he'll probably want to forget - at least, after the first inning, where we actually had a two-run lead, difficult though that is to believe now. By the end, the Brewers had inflicted the worst defeat at Chase in his tenure, taking advantage of wildness from our pitchers, and using everything from seeing-eye singles to three-run homers and Jody Gerut's cycle [legit, Tuleywitzki, please note] to pile up twenty-five baserunners, on seventeen hits, seven walks and an error - the most by an opponent in almost four years.

It seemed to have everyone scurrying for one or more of the following items, which are all quotes from the Gameday Thread.

Take your pick. Just another day at the SnakePit...

In the first inning, it looked like the Diamondbacks were going to pour it on. Kelly Johnson doubled, Conor Jackson singled him home, and Justin Upton smacked a ground-rule double. After Adam LaRoche popped out, Mark Reynolds had an RBI single and Chris Young walked, to load the bases, still with one out, and two runs already in. But Tony Abreu - so hot in his last start - tapped the ball back to the mound, starting a 1-2-3 double-play that was as deflating as it was disappointing. It was probably inevitable that  Arizona wouldn't get another man even into scoring position, until Mark Reynolds trotted round the bases, with a two-out homer, his tenth, in the sixth.

Meanwhile, things started off just like last time for Valdez, as he put runners on the corners with nobody out, and  threatening clouds coming up, in the shape of Braun and Fielder. However, Valdez struck them both out, and then got a ground-out to escape further damage. A leadoff homer in the second brought the Brewers within one, but Valdez struck out the side, so we weren't too bothered. However, although Valdez didn't allow any hard hits in the fourth, he did allow four singles - add two walks (one with the bases loaded) and a LaRoche error, and the Padres scored four, sending ten to the plate.

It was death by a thousand cuts, as every ground-ball Valdez generated, seemed to find a hole in the infield. Two more hits and another run to lead off the fifth marked the end of his night, with Cesar's final line nothing to wrote home about: nine hits and two walks, leading to seven runs. six earned, in four innings. However, he struck out seven, and he just didn't get hammered. No: that would be Blaine Boyer, who gave up four more runs as his part in a six-run fifth for Milwaukee, on two walks and two hits, including a three-run homer that made it 11-2 to the Brewers and sent the GDT into a death spiral.

Chris Snyder's errorless streak should have ended there. On a ground-ball to first with the runner on third, LaRoche stepped on the bag and fired a strike to our catcher - who promptly clanked it. This was scored an RBI groundout, for reasons that escape me. Snyder was also tagged with two passed balls this evening: to me, those count as "catching errors" just as much to me. It was just sloppy by Arizona. Valdez, Blaine Boyer, Bob Howry and Daniel Stange allowed seven walks in six innings - five scored and another was with the bases-loaded. A Tony Abreu error also led to four unearned runs off Chad Qualls in the ninth, and he had to be bailed out by Aaron Heilman.

Positives after the first inning are pretty hard to find. Starter gone after four; bullpen allows ten runs in five frames of work; the offense managed just two hits over the final 8.2 innings. "They piled on and embarrassed us," AJ Hinch just said in the post-game interview, and there's absolutely no argument with that sentiment here. Reynolds, who had two hits and drove in two runs, and Young, who had two walks, are about the only members of the team who deserve any real credit for their performances tonight. I wonder what the fangraph has to say about this? Let's see, shall we? 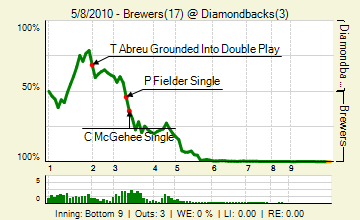 Well, that was another interesting Gameday Thread, which got barnstormed by a drunken participant, who eventually had to be escorted outside the site, to sleep it off. katers was the busiest barmaid, while 'skins cleared away the glasses and BattleMoses checked ID outside [being too young to get in]. Also adding to the ambiance, one way or another: unnamedDBacksfan, skoormit, Wailord, Clefo, snakecharmer, BattleMoses, hotclaws, Dallas D'Back Fan, luckycc, emilylovesthedbacks, kishi, 4 Corners Fan, blue bulldog, ol Pete, IHateSouthBend, LoveMyDbacks, Turambar, dbacks4life and brian custer,

Mother's Day tomorrow, and edbiggheadfest, so look forward to seeing some of you there. Hopefully, it'll go better: hard to see how it could be any other way, frankly!