Interesting one tonight, as soco got engaged to a male Snakepitter, drunkkaters chatted second hand, NASCARbernet revealed his Marxist beliefs, we debated the greats among Jewish ballplayers, Jody Jackson was revealed to be made out of meatballs, and I posted a lot. Okay -- that last part wasn't particularly interesting nor out of the ordinary.

The game itself was almost as interesting as the GDT, lending an Azrecap feel. As the world turned upside-down, the offensively-minded Dbacks and Brew Crew turned in a pitcher's duel, Edwin Jackson and the bullpen actually pitched WELL, Cole Gillespie was the top hitter for a team that only got four base hits, (one of which was by E-Jack) and a fantastic defensive play at the plate was immediately followed by a run-scoring wild pitch to decide the game.

All the weird details after the proverbial jump...

If there's some positive to be taken from tonight's contest we can take it from both starting pitchers. The Diamondbacks actually scored against Milwaukee ace Yovani Gallardo for the first time in franchise history, (albeit only 2 games, both in 2007) and Edwin Jackson, after giving up 18 runs in 6.1 innings COMBINED his last two starts went for 7 tonight while only yielding two solo shots and the aforementioned WP. More on that in a bit.

Jackson was quite effective against a dangerous Brewers lineup, striking out a batter per inning yet walking four. I think it's pretty safe to say that the Jackson we saw pitch tonight was the guy we thought we'd gotten in the Tigers-Yankees trade. Gallardo, for his part, saw his 2010 WHIP rise slightly, from 1.333 to 1.341, after giving up 3 hits and 4 walks through 5. To be honest, the strike zone looked consistently small tonight, though neither team was able to do much: the top two NL clubs by runs scored combined for 10 hits and 10 walks.

Joe Inglett singled with one out in the top of the 1st, but was immediately erased by Hebrew Hammer Ryan Braun's GIDP. (Weird fact of the day: According to SBN's auto-tagger, Ryan Braun is also a pitcher for the White Sox. Strange..) Prince Fielder doubled to left center to lead off the 2nd, on a fly ball that nearly left the park, but E-Jack pitched around that and a walk by Gregg Zaun to end the inning with no score. In the 3rd, however, he wasn't so lucky, as Rickie Weeks blasted a monster solo shot to LF to give the Brew Crew a 1-0 lead. Even Mark Reynolds was impressed.

The Dbacks tied the game in the bottom of the inning on Cole Gillespie's first career big league HR. The leadoff shot must've been especially sweet for Cole, coming as it did against the team that traded him last year for Felipe Lopez. After John Hester struck out, Edwin Jackson broke his bat on a bloop to CF. Kelly Johnson bunted and was credited with a sacrifice on what looked like an attempt to get a bunt hit, but the ball went straight back to the pitcher. (Strange. Usually, KJ's bunts go for 400+ feet) Gallardo must've been shaken by the fact that Kelly's bunt didn't rip a hole in the Space-Time continuum, since he followed up with walks to Stephen Drew, Mark Reynolds, and, with the bases loaded, Adam LaRoche. BOOM! 2-1, Dbacks, with 2 outs. Unfortunately, Chris Young struck out, leaving the bases loaded, and missing out on more damage. Still, we had a lead. Here's a spoiler: It didn't last.

In fact, it didn't even last 2 batters, as the reanimated corpse of Jim Edmonds whacked another solo shot with one out, this time into LF just a few rows up. Jackson pitched around another walk to end the inning, but Gallardo struck out the side in the bottom of the 4th. The top of the 5th was the straw that... well, frankly, broke the miniature horse's back, since the 5th and final run in the game scored not on a bang but on a whimper. Weeks singled to lead off the inning, but Inglett grounded into a fielder's choice. Ryan Braun followed with a one out double to LF. Gillespie, evidently trying to emulate Parra, dove for the sinking liner but watched it miss his glove and roll to the edge of the warning track. Inglett, flying from 1st, tried to score, but Gillespie jumped up, grabbed the ball and flung it to Droo, who, like a sniper, gunned down Inglett at the plate with a solid strike. Hester did a fantastic job blocking the plate, and replays showed that Inglett never came close to touching it. Braun went to 3rd on the throw home.

After the euphoria of great defense and a run saved, Jackson followed it up with a wild pitch four feet outside to Fielder, and Braun scored, taking all the wind out of our sails in the GDT. But, we were only down by 1, and that's usually not enough of a deficit to keep this club down.

The Dbacks had another chance to score in the bottom of the inning, with KJ and Droo getting a walk and a single, respectively, after E-Jack struck out. Unfortunately, Gregg Zaun showed a little catcher's moxie of his own, catching Johnson stealing 3rd on a double steal. It took a perfect throw to catch KJ, and Zaun made it. Reynolds ended the inning by striking out.

Jackson pitched a 1-2-3 top of the 6th, and Carlos Villanueva pitched a 1-2-3 bottom. Jackson pitched around a 2 out walk in the 7th, and in the bottom, Rusty Ryal, pinch hitting for Jackson, got a two out single, followed by another walk by KJ, but Droo grounded into a fielder's choice to end that threat. Esmerling Vasquez, Bob Howry (yes, THAT Bob Howry) and Todd Coffey all pitched perfect half-innings, but Gillespie got a one-out walk against Trevor Hoffman in the 9th. Justin Upton, on an Uptown night, pinch hitting for Hester, came to the plate, swung the bat and made GOOD, HARD contact against Hoffman -- directly to Casey McGehee at 3rd, for a game-ending twin killing. Oh, well. Sometimes luck just isn't on your side. Tonight, it wasn't on ours. 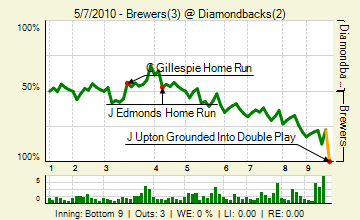 Upton's night off meant Mark Reynolds started the game batting 3rd for only his fourth game in the Majors. However, Mark barely missed SHSIB status: His WPA was -9.6%. Upton's pinch AB in the 9th inning had a huge leverage index of 4.84, meaning he was heavily penalized for the double play.

As noted earlier, "interesting" Gameday Thread, to say the least... some Dacksins guy led all posters with 280+, and soco, justin1985 and snakecharmer also broke triple digits. Present were soco, snakecharmer, justin1985, DbacksSkins, hotclaws, Dallas D'Back Fan, katers, luckycc, kishi, emilylovesthedbacks, Rockkstarr12, ol Pete, NASCARbernet, BattleMoses, skoormit, misterx1978, LoveMyDbacks, Wailord, Bcawz, 4 Corners Fan, pygalgia, mrssoco, brian custer, and venomfan. Before you ask, YES, LoveMyDbacks strangely proposed to soco in the midst of the GDT chaos. Yes, they will be married, probably in California. Yes, they will be breaking a glass. Yes, they are registered at Bed, Bath & Beyond. No, nobody has bought them the fondue set yet. No, I would not recommend saying anything to mrssoco about it.

5:40 start tomorrow, with Dback-killer Randy Wolf (8-3 record in 16 starts vs. Arizona) going for Milwaukee, and rookie sensation (is he a sensation yet?) Cesar Valdez attempting to follow up his strong debut against the Astros. Let's get a win with a chance to take the series on Sunday, aka edbiggheadFest.

Now, if you'll excuse me, I need to go pick up drunkkaters to give her a ride home...