Dan Haren became the first Diamondbacks' pitcher to throw a complete game in 86 attempts, scattering seven hits and a walk over 111 pitches, allowing three runs and striking out nine Astros, as he steered Arizona to a final record of 6-5 on this long road-trip. Meanwhile, Tony Abreu had his first career four-hit game, and played some impressive defense at short, aided by Adam LaRoche's scooping ability, and Kelly Johnson became the first National Leaguer to reach double-digits in home-runs.

Johnson didn't hang about. He deposited the third pitch of the game into the bleachers in left, the first lead-off homer by a Diamondback to start a game since Ryan Roberts on August 26th last year. It was Johnson's fourth careeer lead-off shot. And Haren didn't hang about either. After a lead-off double by Houston, he struck out the next three batters, including Carlos Lee, much though a number of Arizona fans wanted to see a fastball between Lee's shoulder-blades, for his showboating in the ninth inning last night.

That was more or less the pattern for the evening. Haren wasn't unhittable, and there were a couple of times he looked wobbly. The eighth inning was probably the tensest, as Haren loaded the bases with no outs, bringing the tying run to the plate. But a nicely-turned double-play and a ground-out resolved the situation at the cost of only one run, and saved brian custer from a potential lynching, resulting from his premature ejaculation of this "easy victory" in the Gameday Thread. Another double-play in the fourth helped limit a potential comeback inning for Houston, and Haren literally ground-down the Astros, with a mere three of the 27 outs coming in the air.

I was pleased to note that the D-backs didn't rely exclusively on the long-ball, Johnson's homer being the only one of the game. They added three runs on four hits and a hit batter in the third, and ended with thirteen hits in total - the seventh time in the past nine games, all on the road, that they have had ten or more. As well as Abreu's career night, Johnson, LaRoche and Chris Young all had two hits, while Justin Upton had a hit and a walk. The win also improved Arizona's record to 11-0 this season, when scoring more than five runs a.k.a. three free tacos with the purchase of a large drink, between 4-6pm, at participating etc. etc.

An interesting occurrence in the seventh, when LaRoche was called out on batter's interference, his follow-through grazing the Houston catcher as he tried to throw out J-Up stealing second - Upton was sent back to first. Something similar happened in 2008 in Chicago, but there, the base-runner was called out as well. It appears the difference was rule 7.09(e):

If, in the judgment of the umpire, a base runner willfully and deliberately interferes with a batted ball or a fielder in the act of fielding a batted ball with the obvious intent to break up a double play, the ball is dead. The umpire shall call the runner out for interference and also call out the batter-runner because of the action of his teammate.

It seems that in the 2008 case, Byrnes' follow-through was deemed deliberate, while LaRoche's tonight was considered to be accidental. Curiously, Haren was the starting pitcher on both occasions. 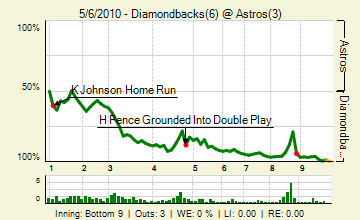 That concludes Arizona's first winning multi-series road-trip since they went 6-4 on an East-coast swing through New York, Pittsburgh and Washington last August. You can't complain about any such occasion, though we should remember none of the opponents on this trip have winning records: the Cubs just got swept by the Pirates, and the Astros are the only NL outfit still in single-digits for victories. The upcoming home-stand, where we face the Brewers and Dodgers (the latter will likely have Mandy back), could be tougher. Both series should be high-scoring: here's where the teams stand coming into today in terms of runs per game, and their NL ranking.

So, we start by pitting the 1st and 2nd teams in runs/game scored, against the 14th and 13th pitching staff in R/G allowed. I'm taking the "over" on this series...