Diamondbacks 2, Astros 4: Did Everything Just Taste Purple for a Second?

Share All sharing options for: Diamondbacks 2, Astros 4: Did Everything Just Taste Purple for a Second?


The Diamondbacks were making a fine effort to win their third straight game and set themselves up for their first series sweep of the season, but it was the bullpen once again that blew the game in the ninth inning. Despite a great start by Rodrigo Lopez, the Diamondbacks couldn't muster enough offense and Carlos Lee took it upon himself to end Houston's losing streak. The Astros snap their eight game skid, Carlos Lee gets his first homerun of the season, and we sit here and wonder. We wah-wah-wah-wah-wooonder.

We continue to get great efforts from the back-end of the rotation. Rodrigo Lopez went seven strong innings and allowed only two runs on only three hits. It all started in the second inning when Lopez allowed a leadoff single to Lance Berkman. After Hunter Pence flied out and Pedro Feliz hit into a fielder's choice, Tommy Manzella stepped up to the plate. On a 2-2- count,  Lopez threw a hanging slider and Manzella lifted it into left field for his first career homerun. 'Rigo went another five more innings, however, only allowing one single and one walk. It was an impressive effort. Subtract the one bad pitch and the homerun, and you could argue that Lopez threw a nearly flawless game.

Unfortunately, Houston's Brett Myers was equally solid. Myers threw seven innings as well only allowing two runs, six hits, three walks, and six strikeouts. With the struggles that their offense has been having, a lot of praise has to be given to Myers and Oswalt for giving their team a chance

In the meantime, the D-Backs offense took a similar approach. Gerardo Parra drove in the only runs of the game compliments of a triple and double in the second and fourth inning respectively. Stephen Drew was the only other hitter with more than one hit while the team tallied for a total of 13 LOB and went for a measly 2-11 with RISP. They made it interesting in the top of ninth though. With runners on first and second and only one out, Kelly Johnson battled against Matt Lindstrom but he couldn't muster enough and the threat ended via the double play.

As Chris Snyder was taken out to be pinch-ran, John Hester had to come in to catch in the bottom of the ninth. It's definitely worth noting seeing as how Hester had not played in either of the first two games and one has to wonder how much scouting he had done against Carlos Lee or any of the Houston batters. Regardless, the blame has to be placed on Juan Gutierrez who let go of another potential win. After walking Kaz Matsui to leadoff the inning, he threw a belt-high fastball right over the heart of the plate. The rest of the story is history. It was Lee's ninth career walkoff hit. 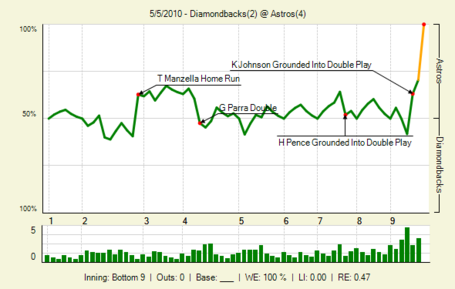 [Click to enlarge, at Fangraphs.com]
The eel's ankle: Rodrigo Lopez, 18.8%
Honorable eel: Gerardo Parra, 15.6%
The baseball equivalent of [insert bad thing]: Kelly Johnson, -37.1%, Juan Gutierrez, -36.8%,
A pretty mild fangraph until one very regretful pitch in the ninth inning. Up to that point in the game neither team had garnered more than a 70% winning probability.
An active gameday thread but not quite enough for 1K comments. DbacksSkins was on top with and soco placed second, the only two to reach triple digits. Others who participated in the fun were: justin1985, NASCARbernet, Clefo, unnamedDBacksfan, Wailord, katers, snakecharmer, SenSurround, kishi, skoormit, nargel, hotclaws, BattleMoses, Jim McLennan, luckycc, 4 Corners Fan, Fiona, Dallas D'Back Fan, pygalgia, Zephon, AJforAZ, IHateSouthBend, brian custer, and of course LoveMyDbacks.
Be on the lookout for tomorrow night's game at 5:05 PM as Dan Haren (3-1, 4.50 ERA) takes on Wandy Rodriguez (1-3, 3.64 ERA). It's a relatively small sample size but the Diamondbacks have done pretty well against Rodriguez so far. Let's hope that trend continues tomorrow.