Tonight's matchup featured Houston ace Roy Oswalt against Diamondbacks rookie Ian Kennedy. Oswalt has completely owned the Dbacks, and the Astros have never faced Kennedy. At the start of the day, I don't think anybody would have been terribly surprised by the 1-0 score, but I don't think most people would have expected the Diamondbacks to be on the winning end of it. A home run by Justin Upton provided the offense and Kennedy and the bullpen notched the team's first shutout of the season.

The Diamondbacks have historically not fared well against Roy Oswalt - he has a 9-1 record with sub-2 ERA. He was once again dominant, even against Arizona's new home-run-happy offense. Arizona only managed to scatter 5 hits and 3 walks in 7 innings against him. Luckily for us, one of those hits was a Justin Upton BOMB to straightaway center field in the third inning to put the Diamondbacks up 1-0.

Ian Kennedy worked extremely hard to protect that lead, and at times it almost didn't feel like he was winning. Kennedy battled with runners on base in the first two innings. In that second inning, fellow pitcher Oswalt put on a battle, fouling off pitch after pitch in an epic 12-pitch at-bat that ended in a single to left. But after two innings and 50 pitches, Kennedy settled down. He had a little help in the 6th when Hunter Pence singled to lead off the inning and later got caught in a rundown in a failed hit-and-run. He also had quite a bit of help from home plate umpire Brian Runge, who may have had a "strike zone the size of Montana." Houston batters were not happy, but the strike zone was at least fairly consistent for both teams. Kennedy hit for himself in the 7th inning and went out the next half, but with after 6 2/3rds innings and 110 pitches, A.J. Hinch pulled him for Juan Gutierrez. Ian Kennedy' final line: 6.2, 8H, 2BB, 3K, 0ER - a fantastic outing.

Meanwhile, Oswalt continued to mow through the Diamondbacks order, and the Astros' bullpen did even better. Former Diamondback Brandon Lyon and Matt Lindstrom each pitched a scoreless/hitless/walkless inning to keep Houston in the game. Fortunately for the Diamondbacks, Juan Gutierrez and Chad Qualls did the same for Ian Kennedy. Neither allowed any hits or walks in what was a well-need confidence booster for the bullpen. Finally, the Diamondbacks won a game in which they scored fewer than five runs, and they get a shutout victory. 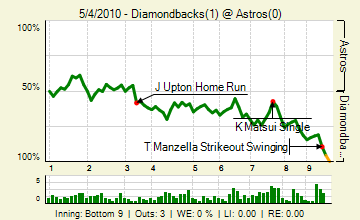 Tomorrow's matchup features Rodrigo Lopez against Brett Myers. It's Wednesday, it's an Azreouscap, so be prepared for an interesting game!