What's Up With...? Justin Upton

Share All sharing options for: What's Up With...? Justin Upton

"I just think he's trying to do too much. We're fortunate to have an offense that takes a little pressure off of him. A little more patience, a little more selectivity and a little less trying to be a monster is what I'd like to see out of him. He's not panicking, but he expects a lot out of himself."
-- AJ Hinch on Justin Upton

It's no surprise that there's a Diamondback at the top of the major-league strikeout list this season. However, it isn't Mark Reynolds - it's Justin Upton, who has so far fanned 39 times. That makes up 32.2% of his plate-appearances this season, compared to a figure of only 23.3% last season. Add to this a batting average which is around the .225 mark, and it seems a good time to ask... What's up with Justin Upton?

The obvious instinctual cause is Upton coming down with a case of Contract Extensionitis, which had already felled a number of players in the D-backs clubhouse e.g. Chad Tracy, Chris Snyder, Chris Young. However, the symptoms seem to date back to the end of last season. In the final two weeks of 2009, Upton hit .236 while striking out in 32% of his PAs, figures close to what he's produced so far. At the time, we wrote it off as possibly fatigue at the end of the long grind, but it seems to have carried forward into this season.

With the spike in strikeouts, the obvious place to start is with Upton's plate discipline, and the number that stands out as significantly different is his Z-Swing % - the percentage of pitches a batter swings at inside the strike zone. Last year, Upton swung at almost 69% of strikes; this season that number has dropped to around 57%. Put simply, Upton is taking a lot more called strikes than he was last year: 33% of his strikes have been looking, compared to only 25% in 2009 - league average is 28%. However, this seems to be early in the count: he takes a called third strike at almost the same frequency as previously, or if anything slightly less (23% vs. 26%).

In effect, when Upton lets strike one go by - as he appears to have been doing a lot more this season - he digs the at-bat a deep hole, from which it is unlikely to recover. This year, it has been even more pronounced: Upton is only batting .157 when he goes 0-1 in 2010, with almost half the at-bats subsequently ending in a K. Historically, Upton has done very well when he puts the first-pitch in play - he's hitting .339 (40-for-118) - so perhaps he needs to be a bit more aggressive in such situations. The picture below shows, from the catcher's perspective, the location and type of called strikes taken by Justin in the first pitch of an at-bat this year: 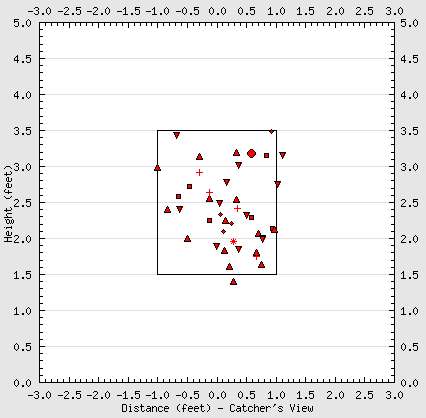 These don't seem like borderline pitches, with a good number appearing to be potentially good eating for a hitter, "right down Broadway," as Mark Grace would certainly say. Let's also look at what has been thrown at Upton. In 2009, he saw more fastballs and sliders: together, they combined for almost 80% of the pitches delivered to him. In 2010, that's down to 72.6%, with an increased number of cutters and change-ups comprising the difference. The results have been indifferent from our perspective: J-Up has not yet shown himself to be capable of handling them, and so can probably expect to see an elevated number of these kind of pitches, until he proves otherwise.

The other thing which is interesting is to compare Upton's spray chart for where he is hitting the ball, against the chart for last season. Here are both charts, with 2009 on the right. Hits are green blobs, outs red ones:

Last year, Upton was hitting the ball to all corners of the field, though admittedly, showed more power when pulling the ball. This season, there appears only to have been about two hits that have gone more than a couple of paces to the right of dead-center. Is that the cause of his problems, or an effect of them? Upton's BABIP is lower this year, with .306 being about thirty points below his career number, but his infield-fly rate is above average, at 22%. Curiously, his line-drive rate is also up, at 21%. Not quite sure what to make of that, or the fact that his walk-rate is up, albeit nowhere near as much as his K-rate, and he's seeing 4.36 pitches/PA, 11th best in the NL.

Obviously, he remains Justin Upton, a 22-year old playing in the major-leagues, and his raw talent remains apparent, especially in jaw-dropping moments like the bomb he hit last night to the deepest part of Minute Maid Park, where few have ever gone before. He started slowly last year too - his BA didn't get above .250 until May - and over the last dozen games, Upton's line has been .277/.370/.468, for an .838 OPS.  While the offense has been fine without him getting out of second gear, I think we'll all be happier when we are consistently seeing the J-Up who made the All-Star Game in 2009.