Share All sharing options for: Diamondbacks 1, Giants 12: How Low Can We Go?

The person I feel sorriest in all this is probably Snakecharmer. She spends all season excitedly waiting for her team to show up in the Bay Area, and gets tickets to the first two games of this series. And the team then rewards her devotion by hitting .053 [that's 3-for-57, since you ask] and being outscored by a margin of 17-1. Tonight's wretched performance on just about every level marked what has to be the low-water mark for the team thus far. They have now lost six contests in a row, scoring just 12 runs while conceding a total of 47.

Where does this rank among the worst six game streaks in franchise history? After the jump, let's see...

Six games, six losses, a run differential of -35 or worse. Here are the previous cases in franchise history where the team has managed to inflict that on poor fans.

So, no. It's not the worst streak in franchise history. Hell, it's not even the worst streak of this month. But isn't it particularly telling that two of the worst handful of six-game runs in franchise history have happened in May 2010? And the past couple have been the most rancid of the rancid. The Diamondbacks became only the fifth National League team since 1995, to be held to three or less hits combined over consecutive games. The pitching was no better: Billy Buckner allowed seven runs in four innings, and the bullpen was little better. I think I abandoned all hope when a Giants reliever drove in a run.

You know the team is playing badly, when they go behind by two runs and you start looking around for something more useful, or simply more entertaining, to do. The respective first innings basically summed up everything that's wrong with the team right now. We got a leadoff double, but Kelly Johnson might as well have pulled up a hammock at second-base and taken a nap, because he wasn't going anywhere. Rusty Ryal grounded out to shortstop, Justin Upton stared at strike three for what seems like the ten millionth time this year and, after a walk to Stephen Drew, Mark Reynolds lined out to left-center.

Compare and contrast the Giants' first inning, where they took the lead without getting a hit. Billy Buckner walked the first batter he faced. Then the second. And a pair of sacrifice flies brought the leadoff man around to score. And a two-out single brought round the other walk to score. 2-0 Giants, and Mrs. SnakePit is reaching meaningfully for the remote control. I can't say I blame here, because this team hasn't come back from any more than a mere two runs down to win a game since April 28th. Tonight was no different: the team showed absolutely no fight, given away at-bats as if they were jelly-beans.

Billy Buckner sucked. Nine hits, three walks and seven earned runs in four innings, raising his season ERA to 11.08. He is simply incapable of retiring major-league hitters, but we have no credible replacements, so I imagine we'll be rolling him out there again in five games time. Cesar Valdez was the sole bright spot of the evening, retiring all the batters he faced and giving us two clean inning. Saul Rivera, on the other hand... Well, if the "cash considerations" we gave Cleveland consisted of anything more than two buttons and an Argentinian peso, we were robbed. Four hits, a walk and three earned run in two-third of an inning. Esmerling Vasquez mopped up and allowed the final two runs. Here's tonight's Fangraph. 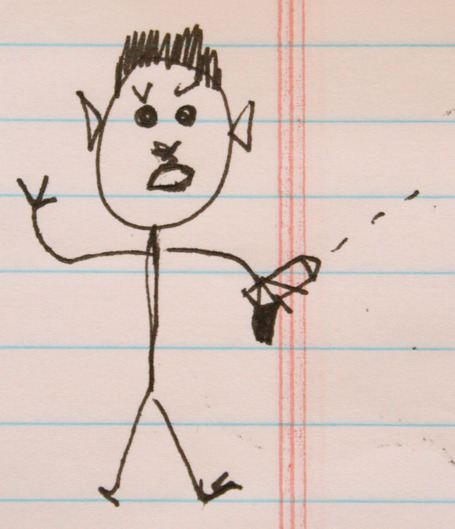 An explanation is in order. I vowed that I would Google Image Search the words "f_cking awful", and use whatever was the first thing that came up. This image is what I found, part of a rather marvelous site entitled Bad Spock Drawings. which is exactly what it sounds like. I do feel it is an entirely appropriate depiction of this evening's performance. GDT comments were much as you'd expect: wailord was the only person to get even to fifty, with kishi and 4 Corners fan in the forties. Also present: Clefo, Azreous, justin1985, BattleMoses, mrssoco, Rockkstarr12, blank_38, hotclaws, emilylovesthedbacks, soco, katers, brian custer, Dallas D'Back Fan and Sprankton.

Comment of the thread? Well, there were a few credible contenders, but the most appropriate one which showed up in green was this mournful one, which was almost Zen-like in its contradictory simplicity:

We'll be back tomorrow. Because that's what we do, dammit.