Share All sharing options for: D-backs 9, Astros 1: We Come To Praise Cesar, Not To Bury Him...

Cesar Valdez became the fifth Diamondbacks pitcher to win on their major-league debut this evening - it may not have been the most dominating performance of all time, but it got the job done, with a little help from the offense. Here's the full list.

Cesar Valdez didn't quite have the quick first frame in the majors, for which I'd hoped. It took him 33 pitches to get through it, and after 32 he only had one out. There'd been a couple of walks, a stolen base and a lucky bloop RBI double down the line by Carlos Lee, before Pedro Feliz kindly rolled into a double-play on #33. There was certainly plenty of movement on his pitches, but he seemed to be over-throwing, and his sinker wasn't sinking as much as scouting reports indicated, staying up in the zone.

Didn't seem to be much difference in velocity between his fastball and his change-up, and the batters seemed able to foul off pitches to stay alive. It was a contrast to Paulino, who in the second fired some 97 mph fastballs at Gerardo Parra, and then struck him out with a 78 mph curve. The second inning took another 24 pitches, including again a pair of free passes, in the shape of a walk and a hit-batter. The latter was the opposing pitcher. Who was trying to bunt. Valdez also got the benefit of a very generous 2-0 call, which helped him escape without further damage.

He did settle down, retiring seven of eight batters faced to end the fifth, including his first clean 1-2-3 inning in the fourth. That took him to 95 pitches, and Valdez was pulled for a pinch-hitter with two on and two out in the fifth. The final line on him: one run, earned, on five hits and three walks, with two strikeouts. The walks were high, especially for someone who has only walked 2.2 per nine innings pitched in the minors, but you can not complain about one run in five innings, even if it came against the worst offense in the National League. He also got groundballs, 11-4, another promising sign. His next start is Saturday at Chase against the Brewers: might be tougher.

He left with a 4-1 lead, and three-quarters of that had been provided by Chris Snyder, who deposited his fifth home-run of the season way back, it looked like it went over the train-tracks that run around the top of left-field at Minute Maid - it's a short porch there, but that was a majestic shot, and I'm curious to see where it ranks on Snyder's all-time list once hittrackeronline.com report on it. Snyder also picked up a couple of intentional walks, Adam LaRoche got a hit and two BB as well, and Mark Reynolds produced two hits and a walk.

The team as a whole racked up their sixth consecutive road game with 10+ hits, a streak surpassed only twice in franchise history. Every starting position player had a hit, and an RBI or a run. However, the other main half of the offense was Chris Young, who tied the game up with an RBI double in the second, and then dumped a two-run single to center as insurance in the seventh. Young had three hits on the night, taking his average up to the .300 mark, and giving him 24 RBI for the season. Last year, he drove in his 24th run of the season on July 9...

When Valdez left, since it was only a three-run lead, it looked like it might be a case of the resistible force, in the shape of the Astros offense, meeting the movable object known as the Diamondbacks bullpen. However, Arizona tacked on a lot of runs late, and the bullpen, naturally chose this evening to pitch four scoreless frames: Esmerling Vasquez looked especially good, with two innings of one-hit ball, though Blaine Boyer's mechanics still seem to be cause for concern. However, the result is what matters, and I think it's probably been a while since we got four consecutive zeroes out of our relievers. 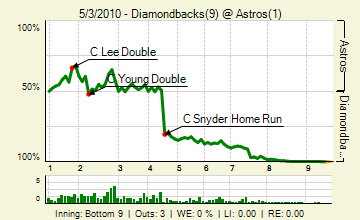 Definitely the kind of game that is like a baseball sorbet, cleansing the palate of a disappointing series in Chicago. The Astros definitely have problem on offense, but are still major-league players, and the victory counts the same in the standings as over any other team. Here's to some more in the coming days.