It was a dark and storming night.... wait, sorry, wrong horror story. It was a chilly and crystal clear evening in the City by the Bay as I took the train into the city to see the Diamondbacks for the first time this year. Although I had figured, with the anemic offense and pitcher-friendly park, that it would be a low-scoring game, I didn't fully realize how low scoring it was until the 8th inning. Edwin Jackson struggled all night to find the strike zone, Arizona's hitters struggled all night to make contact with the ball, and Matt Cain easily handed the Diamondbacks their fifth straight loss.

When I got to the park and saw the regular starting lineup (save Hester for Snyder) posted, my friends and I thought, "Oh okay, so this means...they're going to continue to struggle." I expected a home-run-friendly group of hitters in a not-so-home-run-friendly-park to have a few problems, but I didn't realize how true that would ring. Tonight, the Diamondbacks' offense did two things: 1. Mark Reynolds hit a double off the wall in right in the 2nd inning. 2. Mark Reynolds got hit in the shoulder by a fastball in the 5th inning. Seriously. That's it. If you missed the game, that was the grand total of Arizona's offensive attempts all night long.

Matt Cain pitched very well tonight. He got a few close calls and certainly some help from Diamondbacks hitters swinging at things out of the zone, but he pitched very well. He was economical, he was in the zone, and his pitches were moving. We've felt all year that we can't really hit the breaking stuff, but Cain's fastball had such movement on it that the Diamondbacks couldn't hit that either. It seemed like Cain was constantly ahead of hitters and then they had to swing at something they didn't like or just couldn't make solid contact. Cain had a season-high 9 strikeouts and no walks and he earned every single one of them.

On the other side of the dugout stood Edwin Jackson who, unlike Cain, had trouble all night finding the strike zone. If you're going to miss, miss low rather than high, and that's fine, but try not to miss so much in the first place. Jackson was in trouble from the very beginning, after a leadoff double by Andres Torres, then a wild pitch (he uncorked three tonight, not helped by John Hester behind the plate), then a single by Freddy Sanchez drove in Torres. A leadoff walk to pitcher Matt Cain (he's no Dan Haren with the bat, really) in the 3rd inning came around to score, then Torres scored again in the 5th on a ball that was air-mailed by Justin Upton. Jackson walked Aubrey Huff to load the bases but, thankfully, struck out Juan Uribe to end the Giants' chances. Jackson started the 7th inning at close to 100 pitches (nearly 40% balls) and the bullpen got up after he walked Torres. He escaped the jam by your standard 8-3 double play; Torres had no idea where the ball was, the whole park was yelling at him to get back, but he was toast and Jackson was out of the inning without needing the help of whomever had started warming in the bullpen.

Jackson allowed more walks (5) than hits (4) tonight in his seven innings of work but did manage to strike out 7 Giants. He was ineffectively wild, but it was technically a quality start - 7 innings, 3 earned runs. From your #3 starter, you have to take it, but the Diamondbacks just couldn't do anything with it. The bottom of the 8th inning, pitched by struggling pseudo-closer Chad Qualls, was frustrating. There was a leadoff homer, a single, and a double before Qualls recorded an out. A sac fly scored run #5 for the Giants and he eventually struck out pitcher Matt Cain to mercifully end the inning. The Diamondbacks put a few good at-bats on Cain in the 9th to raise his pitch count high enough for Bruce Bochy to send someone down the bullpen to start warming, but they did nothing productive and went down 1-2-3. Thus endeth the Diamondbacks' first night in San Francisco. 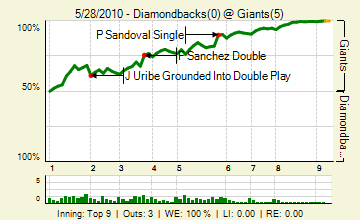 Nobody was neither good nor bad because nobody did anything. Bahhhh. The gameday thread was pretty quiet too, having just passed 800 when I got home. As usual, 'Skins led the way and was the only one in triple digits. All present were: Clefo, justin1985, DbacksSkins, pygalgia, Jim McLennan, Rockkstarr12, kishi, soco, emilylovesthedbacks, brian custer, katers, Wailord, unnamedDBacksfan, Dallas D'Back Fan, hotclaws, 4 Corners Fan, snakecharmer, mrssoco, BattleMoses, and ZonaBacks10.

There were several good Comments of the Night but I had to go with this one:

::looks in fridge::
this is gonna be a looong game. Thankfully, I have beer.
- emilylovesthedbacks

I do have some pictures from the park that I'll add in the comments. And of course you all saw the most exciting picture of the night, which is kishi's personally autographed Green Lantern comic book. Because I am awesome that way. He actually stood around and signed for quite a while for the other guys there and he looked at the comic and he liked it! He wanted a green ring to use so he could throw 99mph. He was bemused. I asked him if he had a better nickname for us, but I don't think he does. :P He wanted to know who else we had nicknames for, if anybody was Iron Man or Captain America. I explained that someone was trying to push Thor but I couldn't remember for whom.