Book Review: Are We Winning?

Share All sharing options for: Book Review: Are We Winning? 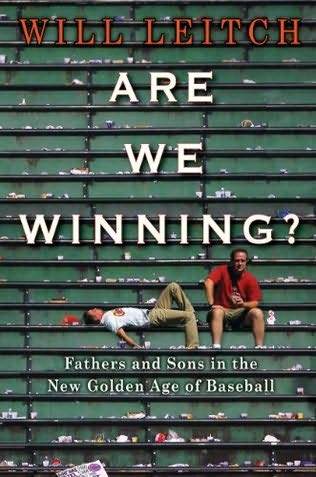 We were all introduced to America's Pastime by someone.  Its one of the baseball's greatest gifts; it's an oasis in the desert of summer for fathers and sons, and mothers and daughters, and friends and lovers.  Baseball holds our imagination as an allegory for a larger American story, but also down to the micro-relationship.  But we rarely acknowledge the impact baseball, and games, have on our relationships.

Will Leitch's Are We Winning? isn't easy to describe.  Like many memoirs, it uses a framing device, in this case baseball, to tell a more complex story.  And like many baseball fan memoirs, it is heavily rooted in tales of Little League and Dad Moments.  It's been released to take advantage of the Dad angle, especially since Father's Day is the second best holiday for booksellers.

Leitch's book is a bit of mess.  I enjoyed it, but perhaps for all the wrong reasons, especially since its being marketed as the perfect Dad gift.  I think it still is, if your dad likes baseball (which is assumed if you're even considering the book) and doesn't mind a bluer sense of comedy.  Leitch has blessedly written a reprieve from the awful, saccharine Mitch Albom books of the world, and his book is something your dad will probably actually want to read.

Are We Winning?'s main sin is although its certainly organized, it feels incredibly uneven as Leitch attempts to interweave 4 different framing devices.  Yes, you read that right.  Where most authors only brave one or two frames, Leitch has taken it upon himself to write the Escher of baseball books.  Unfortunately, not all of the frames are equal, and I found myself wanting to skip whole sections to get the better parts.

The first framing device is that Will Leitch, like his father and father's father, is a Cardinals fan.  Like many father-son relationships, they know each other within the context of baseball.  These recollections of Leitch's childhood and earlier adulthood might not be groundbreaking, but I found them incredibly interesting.  Beyond his awesome job writing sports for my favorite magazine, New York, Leitch is largely an average guy.  His childhood shouldn't be interesting, but since as a baseball fan from a small town that later got the hell out of Dodge, I feel in many ways his story is mine.

The second and third framing devices are the weakest of the four; Will and his dad meet up with a friend to take in a Cardinals/Cubs game, while being interspersed with tales of the overall rivalry between the two clubs.  I'm sure for a Cardinals fan these sections are spot-on and riveting, but after about 50 pages of Cubs bashing (and I'm not even a Cubs fan) things began to feel tedious.  It doesn't help that he runs down every at-bat and inning of this game, and it's frankly not all that interesting even though the Cubs' NL Central championship is on the line.  Leitch attempts to balance the history of the Cubs/Cardinals rivalry with the game at hand, but it lacks any real punch.  Again, this might be most interesting to the teams involved, but I've read books about World Series that have less detail than what Leitch lavishes on this one, frankly boring, game.

The most interesting part of the book is where Leitch gets away from the specific Cardinals/Cubs regalia, and instead talks about baseball in general.  His insights are laser sharp, and range from how this current era is more of a Golden Age than any time of baseball, or how advanced stats might make us understand the game we love better but ultimately sterilize the game.  Even better is when he interweaves these insights with anecdotes from father, which provides a satisfying young fan/old fan comparison.

Ultimately Are We Winning? is a book that will please Cardinals fans the most, but there's still quite a bit of meat for fans of the other 29 teams.  You or your dad probably don't have anything like it on your bookshelf, which is another plus.  Leitch also writes well, and humorously, making the book an easy read.

Buy now if you're looking for something different to read for baseball books, otherwise wait for the paperback.  Either way, I think it's a book that stands well on its own, but doesn't make the baseball book canon list.