The first inning had been one of the better for Arizona this year - we'd allowed only 27 runs, second fewest of any regulation frame. But that did not prove the case today: the Rockies scored three times before Dan Haren got his second out, and that proved to be sufficient to propel them to a victory and a sweep over the Diamondbacks, who have dropped four in a row, scoring a grand total of eleven runs in the process. The team record is now 1-22 when scoring less than five runs, and 16-0 when scoring more than five.

The key at-bat in this contest came with one out in the top of the sixth. Arizona had scored two runs, on an RBI single by Chris Young, and a bases-loaded plunking to Chris Snyder, and pulled within one run - they still had the bases loaded, with only one out. AJ Hinch opted to leave Dan Haren in, to hit for himself. In a very unusual move, Jim Tracy opted to pull his starter, going to the bullpen to bring in a reliever specifically to face the opposing pitcher. I can't recall seeing that, outside of the days of Micah Owings, perhaps.

But it worked. Dan stared at strike three, Kelly Johnson closed out the inning against another reliever and Haren allowed five more runs while retiring four batters, including back-to-back-to-back home-runs in the seventh, before being taken outside and shot relieved by Carlos Rosa. His final line: ten hits, four leaving Coors Field, and eight earned runs, jacking his season ERA to thoroughly unimpressive 5.35. It's even worse in May, reaching an almost bullpenesque level of 6.08. If my math is correct, opposing batters have hit .321 off our "ace" during the month. What was previously an issue, is now showing every sign of become a Major Problem. Capital letters used advisedly.

It almost felt as if Haren lost focus after his at-bat, or gave up. He had retired fourteen straight Rockies to that point, settling down very nicely after a rocky wobbly first inning, that started single. RBI double, K, two-run homer. The Gameday Thread clearly shows enthusiasm for the actual game largely evaporated at that point, and that proved to be a well-founded judgment, though the faux comeback in the sixth provided a brief, if entirely false hope of redemption. But after Haren took the mound again in the bottom of the sixth, the Rockies teed off on him: they went 7-for-10 with three home-runs.

Is it a fatigue issue? Not including today, opposing batters hit a respectable .252 off Haren during his first fifty pitches this season. From pitch # 51-75, that increases to .296. For pitch #76 on, that becomes .309. And given he was yanked after his 99th delivery this afternoon, I am pretty certain the last number is going to go up significantly, after this afternoon's batting practice session. There seems to be more to it than simple "familiarity" - for Haren does much better the third time through the order than the second. It's also a fairly new development: over his entire career, the numbers are much closer to each other: #1-50 = .254; #51-75 = .244; #76+ = .254.

Not much else to report. The key difference between the teams was the top two in the Rockies order were 6-for-8 with five runs scored and three driven in, while Kelly Johnson and Gerardo Parra were 1-for-8 with zero and zero. Stephen Drew continued his hot streak with a pair of hits and a walk - there'll be more on him a little bit later tonight - but Chris Snyder, with a walk and RBI HBP, was the only other Diamondback to reach safely more than once. We tallied up fourteen strikeouts, with Justin Upton (0-for-4 with three K's) and Adam LaRoche (0-for-3 with three K's) the worst offenders, as Arizona made Jason Hammel look very good indeed. 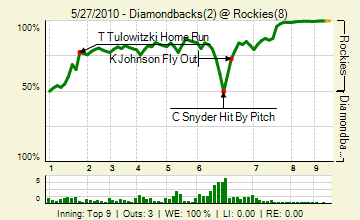 Comment of the Day time. Not an enormous amount of green to select from - seems I'll have to go back to whacking you people over the head with the "Rec" stick for a bit longer. I was very much tempted to award this coveted award to PinchHitLancePainter's shameless bit of flattery: "Does that Jim Mac fellow still run this site. I love his stories. Very well written. Much better than those generation Z stat heads on PR." However, much though that was appreciated, I can't bring myself to award it to a Rockies fan. Heck, we gave them three games, what more do they want? So, instead, the winner is...

we're not women here.
we can only cook once a day.