Diamondbacks 3, Rockies 7: Fill in the Blanked

Share All sharing options for: Diamondbacks 3, Rockies 7: Fill in the Blanked

In the last Azrecap featuring Mad Libs, I provided some options for you to choose from in constructing your own recap. A few were hilarious, and yes, I am modest. This time around, we're going with the full-fledged old-school model, where every bit of the puzzle is up to you. YOU have the power to make an otherwise forgettable game turn into a lasting memory. YOU can finally step up to the plate and have your very own recap on the AZ Snakepit. Are YOU a bad enough dude to save the president? Well, start by filling in these blanks and then see how they apply after the jump:

No easy task for the Diamondbacks tonight, as they took on the best pitcher in baseball this season in Ubaldo Jimenez. Jimenez has thrown the ball (ADVERB) this season, with an ERA below 1.00 that only got lower tonight. For Jimenez threw eight (ADJECTIVE) shutout innings, giving up just six hits and a walk. I guess it could be considered a small victory that we only struck out three times with our K-happy lineup.

A summary of the Diamondbacks' offense on the night won't take very long to get into, because it was (ADJECTIVE 2). Cowboys in the old west would probably say it was as slippery as a (NOUN) on a(n) (ADJECTIVE 3) day. The tone was set in the first, when Kelly Johnson started things off with a leadoff double, then stood around doing nothing while Arizona (VERB ENDING IN -ED) all three of their chances without even advancing the runner. That was the only runner in scoring position they would have until the sixth inning (although it felt like the (NUMBER GREATER THAN 10)th inning by then), when Drew smoked an opposite-field double. And a couple times when the Diamondbacks would get a baserunner on and start to threaten to put together an inning, somebody would (VERB) up and hit into a double play.

Once Jimenez was safely stuck back in the (NOUN 2) with the rest of the Rockies, Arizona finally woke up a little. Back-to-back hits by Drew and LaRoche set the table for Reynolds, who hit a home run all the way to (CELESTIAL BODY) to break up the shutout and at least keep things interesting. Let's just say he was about the only Diamondback who earned his (ALCOHOLIC BEVERAGE) in the post-game spread tonight.

Now, for the pitching. Rodrigo Lopez was faced with the difficult task of out(VERB ENDING IN -ING) Ubaldo Jimenez, and though he wasn't terrible, he certainly wasn't good enough. He gave up a solo shot to Seth Smith in the first, but the (ADJECTIVE 4) blow (and ultimately the difference) was a two-run triple by that (NOUN 3) Brad Hawpe, with both baserunners having reached via a walk.

Lopez gave up another run in the sixth before calling it a night, but he certainly pitched well enough to keep the team in the game. Of course, that's a bit misleading, as the Diamondbacks still have just one win this year when they score four runs or less. It's a good thing that we've scored 5+ runs as many times as we have, or this team would REALLY be a (NOUN 4).

No, the most disappointing part of the night was the continued struggles of one Juan Gutierrez, who basically throws like (EFFEMINATE CELEBRITY) at this point. Gutierrez labored just trying to get through one inning, and the Rockies looked to (VERB 2) his pitches at every opportunity. The first two batters hit home runs. He managed to (ADVERB 2) get an out before walking Tulo. One out later he was on the cusp of getting out of the inning, but no. Two straight base hits scored a third run before Gutierrez was mercifully (VERB ENDING IN -ED 2), and he spent the rest of the game looking sad in the dugout. His ERA this year is now 10.00 on the nose, although it might as well be (NUMBER GREATER THAN 100). Someone should hit Josh Byrnes over the head with a sack of (PLURAL NOUN) if Juan isn't on the next bus to Reno. Or (FARAWAY PLACE). 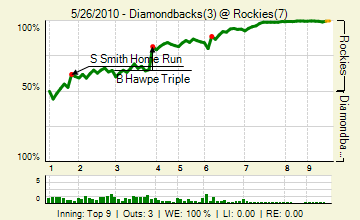 Busy GameDay Thread, although once again we fell just short of 1,000 comments -- of course, that will change with a flurry of post-game comments like last night mouth. But for the purpose of this recap, no dice. soco led the way with 200+, and Skins and justin also reached triple digits. The rest of the (PLURAL NOUN 2): justin1985, katers, Jim McLennan, DbacksSkins, soco, 4 Corners Fan, snakecharmer, Wailord, hotclaws, emilylovesthedbacks, BattleMoses, skoormit, Jdub220, blank_38, AJforAZ, MidnghtDrgn, Dallas D'Back Fan, unnamedDBacksfan, zeusmith, Azreous, edbigghead.

The Comment of the Night, of course, belonged to (SNAKEPIT USER), who had a gem about Troy Tulowitzki's love of (NAME OF BOY BAND). We all had a hearty laugh at that one, we did.

Tomorrow, the Diamondbacks will look to avoid a sweep, sending Dan Haren to the mound to try and salvage something in Colorado. I'm sure it will be (ADJECTIVE 5). You know what -- on second thought, maybe we should save some of Mark's (ALCOHOLIC BEVERAGE) for ourselves. It might still be a long season.

If you feel your recap has become a gem, feel free to post it in the comments below. Your peers will thank you.