Diamondbacks 2, Rockies 3: Right in the Mouth

Share All sharing options for: Diamondbacks 2, Rockies 3: Right in the Mouth

Supposedly, my recaps are usually interesting games. Yeah, that's a vague adjective that can be used to describe just about anything. But if you go through the history of Azrecaps, there's something to the notion.

Tonight was not one of those nights.

Neither team could muster much offense, even though both starting pitchers were far from dominant. Despite falling into an early hole, the Diamondbacks had a chance to steal this game in Coors Field, but came up short at the end.

More on this game after the jump, if I can manage to avoid talking about the Suns instead...

The first five innings for the Arizona offense could be described as "down in order, or waste a chance." It's like a carnival game where the only prizes are arsenic and mix tapes featuring Troy Tulowitzki walk-up songs. The first and third innings were the wasted variety -- a runner in scoring position with the middle of the lineup given a chance, only to come up woefully short (Upton and Jackson were the culprits there). The second and fourth were the "ho-hum, let's make Jhoulsysdcjusdocaoisjc Chacin look like a Cy Young winner" type, with some pretty bad at-bats leading to the side being set down in order on less than 10 pitches.

And yes, I'll acknowledge that Chacin has been good this year. Thanks for asking.

Meanwhile, Ian Kennedy was struggling in the early going, especially in the second. After giving up a leadoff homer to Brad Hawpe, Kennedy seemed to lose his control of the strike zone. He walked Olivo, then left a fastball up to Ian Stewart for a base hit. He left another pitch over the plate for Barmes, but he flied out harmlessly. Chacin bunted to move the runners over, essentially giving Kennedy a free pass to being one out away from getting out of the inning, but IPK's very first pitch to Smith was about a 30-foot changeup that bounced between Snyder's wickets, and a second run scored.

His problems continued in the third. Kennedy got Helton to strike out to start the inning on an 0-2 fastball that wasn't far off the middle of the plate, then gave up a bomb to the aforementioned Tulo. One out later, he gave up back-to-back walks to Olivo and Stewart, but got bailed out against by Barmes on a flyout to end the frame.

After that, though, Kennedy finally managed to lock in and work two scoreless frames, managing to keep his team in the game in the process. He faced just one batter over the minimum in that span, a leadoff single by Helton in the fifth. His line wasn't exactly what we've come to expect from him so far this season (5 IP, 5 H, 3 ER, 4 BB), but Kennedy was able to fight through a night where he clearly didn't have his best stuff, so props to him for that.

The Diamondbacks made the game more interesting in the sixth, thanks in part to having the top of the order up. Johnson slapped a base hit to right, and scored on a Jackson double on which Hawpe displayed his lack of geometry understanding (the hypotenuse is shorter! Don't chase balls in the gap at right angles!). Drew grounded out to the right side to move CoJack over, and an Upton groundout deep in the hole at short brought home Neckbeard the Pirate. But Chacin struck out LaRoche to end the inning, and that was that.

Not too much else here to note. Arizona went down in order in the seventh and eighth. There was a bit of a strange situation to start the penultimate inning, as Belisle (who had hit for himself to lead off the seventh in a one-run game) got ready to face Gerardo Parra, but was immediately yanked for Joe Beimel. So Hinch went back to his bench and sent up Roberts instead. All of that maneuvering ended up in an anticlimatic groundout.

The Diamondbacks had one last chance against Corpas in the ninth, when Stephen Drew led off with a single. Upton completed a bad night with a popout, LaRoche was robbed by a decent play by 2B, and Reynolds struck out with a RISP. End of story. 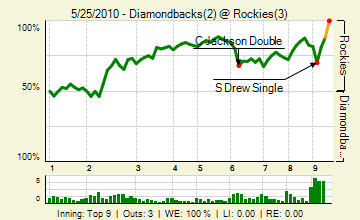 Tomorrow, as was well-documented on the broadcast, we face Ubaldo Jimenez, he of the sub-1.00 ERA. While I acknowledge that Rodrigo Lopez has exceeded expectations for us to this point, I'm pretty sure we're not on the better end of that matchup. Tune in to see if we can steal a win like we did against Lincecum.

Oh, and I haven't had internet for the past five days while we moved to a new place, so I'm making up this Comment of the Night thing as I go. My choice is the following:

Really, what could sum up tonight's game better than that.

And finally, the Suns won. I almost made it without mentioning it, but I can't help it. They are my first love, even though my SBN account would lead you to believe otherwise. Sorry folks, but I've been following them for 20 years and the idea of being two games away from the NBA Finals is surreal to me.