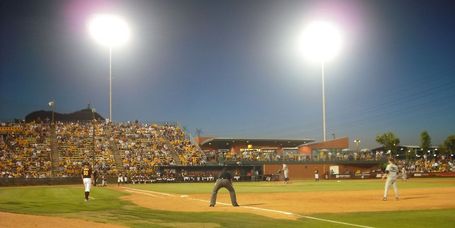 The whole "collegiate sports" thing is a complete mystery to me. I mean, I went to university, but that was for, y'know, academic purposes. The rabid passion which it ignites here is absolutely inexplicable. So, even though I have been living in the United States for approaching ten years, yesterday's baseball game between ASU and Oregon State was my first-ever experience of the creature.

So, at the risk of treading slightly on the toes of our cousins over at House of Sparky, here's a report from yesterday's game from the somewhat-clunkily named Bobby Winkles Field, Packard Stadium at Brock Ballpark.

Regardless of its name, it is a pretty little park, nestling between Wells Fargo Arena and Sun Devil Stadium. It holds about 4,500 and wasn't far off capacity on this day, the announced crowd being 4,123. There's no outfield seats, and even between the foul-poles, there was really only two tiers of seating, bleacher-style, with some open space towards the outfield, where people could bring their own chairs in to the park to sit. The cosy confines made it feel even smaller than a spring-training park, and there was only one scoreboard, which was definitely old-school.

No exhortations to "MAKE SOME NOISE!!" were made, or indeed needed, which was refreshing - as was the absence of the sensory barrage you get at Chase Field. No hot-dog race, cheerleaders, T-shirt toss, etc. This was really all about the baseball, with the possible exception of the presence of the ASU mascot, Sparky (below). Now, that's what I call a mascot - any chance we could trade him for Baxter? However, I was disappointed not to see the Oregon State mascot in attendance - I'm guessing, based on their nickname, that it would have been a giant beaver. I would like to have had my picture taken with one of those. 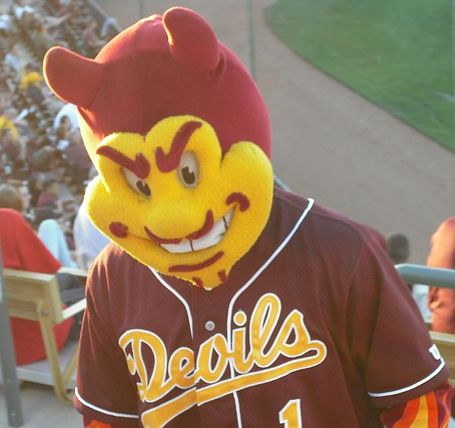 That said, I can't say I like hearing the "PING!" of the ball coming of an aluminum bat, which still seems completely unnatural to me, though imitating the sounds was a steady source of amusement throughout the game as a result. We also wandered about the stadium - though given its' size, there wasn't actually that much to see - we did note that concessions were not really discounted for students, with a lemonade costing $4.50, the same as it would be at Chase. The park had a "wall of fame" for their famous alumni, so we naturally paid homage to the greatest ballplayer ever to pull on an ASU uniform, Tuffy Gosewisch. Somewhat embarrassingly, ASU had also retired Barry Bonds' number, though I was pleased to see that had made some effort to address the issue.

In attendance for the contest were myself, Mrs. SnakePit, soco, mrssoco and battlemoses, and the net effect was almost like a Gameday Thread, albeit for a game where we (okay, in particular, me) had no clue who any of the players were. Still, old habits die hard, and every time ASU short-stop, Drew Maggi, came to the plate, we all insisted on yelling "DROOOOOOOO!", to the clear bemusement of the rest of the crowd. We had something like that for just about every player who took part, though it must be said that our attention was somewhat diverted during the first half of the contest, with mrssoco and Mrs. SnakePit constantly checking their mobile devices for news of the Diamondbacks game, until that had been put to bed.

The baseball? Well, if you insist. Arizona State are good. Very good. In fact, they are currently the #3 ranked-team in the nation, as we head towards the College World Series. I suggested that, come next month's draft, it might be best if the Diamondbacks, with the sixth pick, selected ASU... No, not any particular player at ASU, but the entire roster. It looked a bit shaky after the first inning, as the home center-fielder seemed to lose a ball in the setting sun, and then fell over, which helped to allow the Beavers to score twice. However, the Sun Devils fought back with a three-run homer from star right-fielder Cole Calhoun, and Merrill Kelly allowed no more runs in seven innings of work. 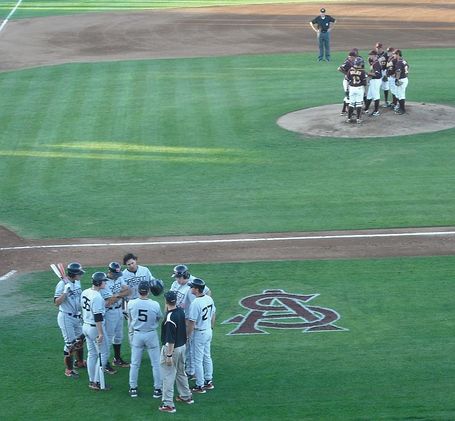 This was odd. When the pitching team had a conference on the mound...
The hitting team gathered just outside the lines for one too.

It game to the eighth, with ASU still leading Oregon State, now by a score of 5-2, and the Sun Devils turned to their bullpen, in the shape of Mitchell Lambson. Of course, what baseball game in Arizona would be complete without a bullpen meltdown, and he promptly allowed two home-runs to the Beavers batters, and the game was tied at five. This prompted chants from our section of "Are you Gutierrez in disguise?" But with one out, three straight singles gave ASU back the lead, and the home bullpen wobbled through a ninth-inning, which saw the tying run left in scoring position. And after the game, the victorious team came out onto the park and tipped their collective hats to the crowd, acknowledging their support - a nice touch, which would be nice to see in the majors.

Throughout the contest, Mrs. SnakePit kept nudging me as attractive co-ed "scenery" meandered past, muttering "This is why SnakePit Jr. likes going to classes here." Just another aspect of what was a very pleasant evening, especially after the sun went down, and the balmy breeze blew across Bobby Winkles Field, Packard Stadium at Brock Ballpark. Yeah, like I said... It's clunky. But that hardly detracted from the entertainment: there's not really such a thing as a "bad" baseball game to watch, when the company is amiable and the setting pleasant. Thanks to soco for suggesting the event, and all those who showed up to help me appreciate another aspect of baseball in Arizona. 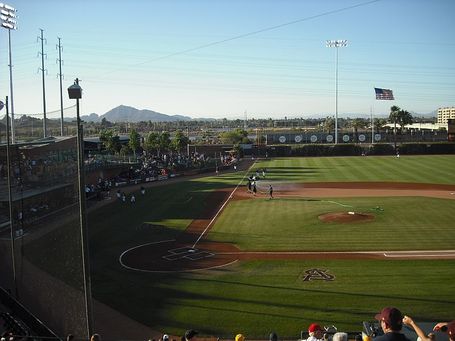