Well, it's hard to complain much about a 4-1 home stand. Still, this afternoon's dispiriting loss didn't quite send us off in quite the fine form that we were hoping for this morning. A tale of disappointing pitching, injured second basemen, and a team that finally failed to reach eight runs, all lies ahead.

But admit it- you're just going to scroll down to the bottom to see if you won Comment of the Day, aren't you?  Whatever your motive, just hit the jump.

Things started off pretty well.  Billy Buckner came out of the gate strong, sending the Blue Jays down in order in the top of the first.  In the bottom, a double from Tony Abreu meant that Justin Upton's single was of the RBI variety, and we found ourselves looking at another early lead.  Buckner let the Blue Jays load the bases in the second, but a strike out meant they couldn't capitalize on it.  It may have been early days, but could that be a glimmer of hope sparkling in our eyes?

The offense decided to take a few innings off, going down in order in the second and third, while the Blue Jays finally got their offense- sorry, offence- back from Customs.  Over a few innings, Toronto put up 11 runs, including a home run from Edwin Encarnacion.  (I expect to hear reports of fistfights breaking out during the Winter Meetings as NL West GMs try to negotiate a trade for him next off-season.)  Most of the damage was done in the fifth inning, as the Blue Jays put up five runs, chasing Buckner before he'd managed to notch a single out that inning.  His final numbers (4 innings, 8 runs, 7 earned) are enough to make you look forward to Kris Benson's rehab start in Reno tomorrow.

With Buckner gone, we went to the B-Bullpen.  (Wait, do we have a B-Bullpen?  The F-Bullpen?  Does Apple sell an iBullpen we can buy?)  Regardless of what you'd call them, we sent in a stream of guys with ERAs running from bad (Rosa's 6.00) to absolutely appalling (Rivera's 45.00).  Results varied.

Cesar Valdez came in with two on, and immediately allowed one of them to score.  Next inning, he had the bases loaded with two outs, and gave up a single.  The bad news was that the hit got past Conor Jackson in left field, and cleared the bases.  McDonald was caught between second and third, but by that point, the damage was pretty much done.  Rivera gave up a run in the seventh, and it was noted that it's never a good thing when giving up a run an inning lowers your ERA.  Gutierrez and Rosa did give us 1-2-3 innings in the losing effort, though.

At the plate, not a whole lot to talk about.  Ten hits, but it never seemed like that many to me.  Half of them went for extra bases, with Chris Young being the only player with two hits, putting up an RBI double and a home run.  Still, when the team puts up a run to cut the deficit to one, and then your pitching responds by giving up five, the offensive contributions of the team seem somewhat unimportant.

There was also some bad news on the day, injury-wise.  In the fifth inning, Jose Molina tried to stretch a single into double, and Tony Abreu tagged him out.  Molina slid hard into second, and Abreu was obviously in pain.  He was pulled from the game and replaced by Augie Ojeda.  Preliminary reports say Abreu has a sprained left wrist, and Nick Piecoro reported on Twitter that it looks serious.  Tony's going to the DL, and we're likely to see Ryan Roberts and his bevy of tattoos called up from Reno. 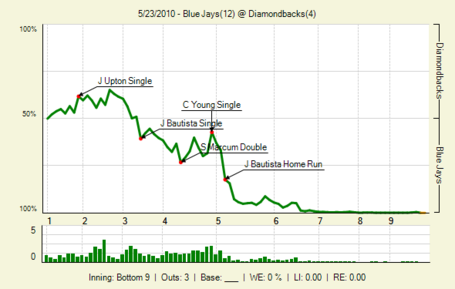 A pretty accurate representation of the game.  Buckner's runs were the lion's share of the pain, and at the plate, no one other than Young managed to make an impression above 3%.  Fairly quite Gameday Thread as they go, especially after yesterday's trek near 1.5k.  'Skins continued his triumphant return from the early 1900s, posting 164 comments and regaling us with some hilarious anecdotes about the Teapot Dome Scandal.  Note: Only one of those things actually happened.  No one else passed triple digits, with myself in second and katers and hotclaws tied for third.  Also stopping by for a chat: Jim McLennan, Wimb, Rockkstarr12, emilylovesthedbacks, 4 Corners Fan, pygalgia, mrssoco, Wailord, Smoggie, skoormit, MidnghtDrgn, Muu, and snakecharmer.

With the suggested implementation of the Comment of the Thread feature, we certainly saw a lot more green than usual.  Keep it up, folks, it makes it easier to to pick out some of the gems.  And who wins the honor of the first award?  Drum roll please, ladies and gentlemen, and a round of applause for...  mrssoco, for summing up the season so well in just a few lines:

I lost my optimism in mid-May
I’ve been looking everywhere but it’s still missing. I put up flyers, though, so I guess I’ll wait it out. I’m not holding my breath.

Congratulations, mrssoco.  Feel free to include this achievement on your resume.

Well, 4-1.  A good home stand, and now a travel day tomorrow and a start of a series in Denver.  Prepare yourselves, gentlefolk of the 'Pit.  That's three games we're going to have to put up with Dinger.  Be strong.