I'd like to spread the responsibility for tonight's headline among soco, mrssoco, BattleMoses and Mrs. SnakePit, who were involved, in some measure, in its creative conception, as we sat at tonight's ASU-Oregon State baseball game (a full report on which will follow tomorrow). So don't just blame me.

Anyway, this evening's game was kinda similar to last night's. The Diamondbacks appeared to be cruising to an easy victory through seven innings, but the late frames got a bit dicey, with the Blue Jays using the long-ball to close the gap. However, Chad Qualls picked up his third save in as many days, preserving the win for our starter and extending Arizona's run of success to four games. It's also the first time the team has scored eight or more in four consecutive contests since April 23-26, 2001

Details after the jump. Though, you will be glad to hear, no more gnome puns.

Well, "details" is probably being a bit generous, since the contest wasn't on television and I was nowhere near Chase Field. A bunch of stuff cobbled together from the box-score and other recaps will have to suffice. It was good to see the team jump out early, dispatching the Blue Jays starter from the game after recording just four outs. The Diamondbacks hitters will have been sorry to see former team-mate Dana Eveland depart, as they went 8-for-12 with two walks during his brief appearance on the mound, tagging him for eight earned runs. They then managed only two singles and one walk in 6.2 innings against the Toronto bullpen.

So, it was fortunate they made the most of their early chances. Chris Young had the big hits in both frames, with a two-run double in the first, and a two-run single in the second. Adam LaRoche also had RBI singles in each inning, with the other two runs coming from doubles by Mark Reynolds and Conor Jackson respectively. However, we sent the minimum to the plate from the end of the second through two outs in the eighth, with the only base-runner - a single by Justin Upton - being erased by a double-play.

Upton, LaRoche and Young each had two hits, while Kelly Johnson had a hit and a walk. Upton has now got his average up to much more healthy territory, at .269: he has hit .409 [18-for-44] over the past eleven games, with seven multi-hit appearances in that time. Mind you, LaRoche has been even better, with a line in the past seven days of 11-for-23 with three homers and eight RBI. It's going to make for some interesting discussion when it comes to the Player of the Week on Monday - Edwin Jackson will have to be in the mix there too.

He was excellent through seven innings this evening, extending Arizona's run of long outings from their starters. They've given the team eighth-inning outs five of the last eight games, but I am a little concerned about Jackson's pitch count - his last three starts have been 121, 114 and tonight, 117 pitches. Edwin was already in the top 30 for Pitcher Abuse Points before this evening, but I guess Hinch's hand is being somewhat forced by the unreliability of the bullpen. One could wonder why he went out for the eighth, with an 8-1 lead, though he was only at around 90 pitches by that point.

It didn't take long to unravel, however. Single, single, three-run homer to - who else? - Edwin Encarnacion. And after a couple of swinginy K's, another long-ball followed. Yeah, you think we rely on homeruns? Toronto have used it so score ten of their eleven runs so far in this series, compared to Arizona's three of sixteen. The late barrage did make Jackson's final line look a little less impressive: five earned runs in 7.2 innings, on six hits with nine strikeouts. Esmerling Vasquez came in to get the final out of the eighth, and Qualls kept the tying run away from the plate, striking out the last two Toronto batters after a one-out single.

However, the key, once again, was no walks issued tonight by Diamondbacks pitchers. I don't think it's coincidence that, over the winning streak, we have handed out only seven free passes in 36 innings, while Arizona has fanned 36 opposing batters over the same time-frame. It's the first time since August 2008, we've had back-to-back games with zero walks. Of course, it probably helps that Toronto are such free-swingers: I think they swung a couple of times in this series when our pitcher was just trying to get a new ball from the umpire. They now have 74 homers: only the Red So (59) have even got ore than fifty in the AL. 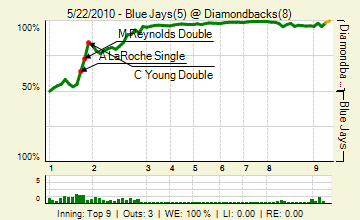 'Skins returned, and made up for lost posting time due to his 'Net outage, with a massive 388 posts. It was a good night for the laideez, with Rockkstar12, katers and Lisalisa8 all cracking three figures and hotclaws just a couple short. kishi made it past a hundred, and others present were: Muu, pygalgia, soco, mrssoco, emilylovesthedbacks, Bcawz, piratedan7, AJforAZ, 4 Corners Fan, Jim McLennan, dima1109, luckycc, DJPJ, snakecharmer, BattleMoses, Turambar, Wailord, blank_38, GuruB, LoveMyDbacks, brian custer, unnamedDBacksfan and Dallas D'Back Fan. 1,563 comments, helped no doubt by a recap that saunters in four hours after the game has finished...

I quite like the idea of a 'Comment of the Night' no-prize, but it would require you folk to make heavy use of the 'Rec' button. There's just no way any recapper should be expected to filter through fifteen hundred comments in search of the gem of Wildean wit. But if you are prepared to help out by clicking that 'Rec', then I'm willing to give it a shot for tomorrow, as we try to complete a very satisfactory undefeated homestand. Another helping of roasted Blue Jay? Don't mind if I do...