Tonight the Diamondbacks played their little hearts out on the offensive side, and still tried their hardest to lose the game in a baffling manner.  It was a game where everything seemed to go right except for six, short moments where the baseball was launched far beyond the outfield fences of Chase Field.  We should have been celebrating, and for most of the game we were.  But by the ninth, as Juan Gutierrez gave up back-to-back solo home runs after getting ahead of both of the hitters, we collectively held our breath, fearing the worst.  We've seen the end of this movie before.

With a shrieking solo home run Fred Lewis of the Toronto Blue Jays kicked the game off ominously.  Much ado has been made about the Blue Jays' power, they of league-leading 66 home runs.  Was it Pod Haren tonight?  He replied, "no," and promptly dispatched of the next three Blue Birds in a fine fashion, only taking 8 pitches to finish the inning.

It didn't take the Diamondbacks long to respond, waiting an inning before taking the lead in the 2nd, starting off with a Justin Upton single.  He was promptly brought home with a two-run homer from Adam LaRoche.  Anything the Blue Jays can do, the Diamondbacks can double, natch.

The two teams traded scoreless frames in the 3rd, but it was in the bottom of the 4th that the Diamondbacks seemed to break the game right open, smashing the little piggy bank on the hard linoleum floor of Jay's starter, Brandon Marrow, and collecting all the little shiny quarters for an all-day Pac-Man marathon.  Upton again got the D'backs started, lashing a double over the center fielder's head.  Adam LaRoche, as the next batter, should have been out, but Edward Encarnacion and Fred Lewis couldn't communicate their assignment and let LaRoche's pop-out drop for a double as they tumbled over one another like love-sick puppies.  Not to be outdone, Mark Reynolds doled out a double of his own, driving in his fellow D'backs to bring the deficit to 4-1, and still no outs.

Chris Young singled to bring two on the corners, and no outs for the other Chris, Chris Snyder.  He took a few hacks before going down quietly on a pop-out, but Dan Haren was here to contribute to his own cause.  He also doubled, making it four for the inning, which brought the score to 6-1 as Reynolds and Young easily passed home.  Kelly Johnson would walk next, but neither he nor Haren would score as Conor Jackson and Stephen Drew both struckout, as the Diamondbacks are wont to do.  Inning over, but damage done.

It was at this point a knowing fan, or our fearless leader, Jim, would think to themselves: "the Diamondbacks have 6 runs tonight.  They've yet to lose a game this season when scoring 6 runs."  And at the time it seemed like a likely end, even though only 4 innings had been played.

Encarnacion had his own plans, however, and took one pitch before hitting a solo shot of his own, 6-2.  Haren didn't let it shake him, though, and struck out the side for an Alabama Inning.  And Haren was truly his masterful self tonight, if you ignore a few mistakes.  He struck out 8 and sprinkled 9 hits over eight innings.  He even picked up 3 RBI's, including one in the 6th when he doubled in Snyder, who had been at first after a walk.

At this point the game began to take a turn to the surreal.  In the top of the 7th, Encarnacion hit his second solo home run of the game, putting the score at 7-3 and making it the third solo homer of the game for the Canadian Birds.  Although Young would try his hand at a solo homer in the bottom of that frame, Jose Bautista would almost immediately answer in the top of 8th for his own solo shot, bringing the Blue Jays total to 4.

They were still down 4, though, going into the top of the 9th, and Gutierrez seemed to be back to his dominate self.  Perhaps he had finally shaken off the bullpen blues that had been ailing him?  He was dealing strikes, getting a weak grounder back to the mound, and a strikeout for the first and second outs.  He then got ahead of Encarnacion, and seemed primed to end the game with a slider away.  It hung ever so slightly and Edwin went down to get it, putting it over the left field wall for his third homer of the game.

Everything was still fine, though.  It was only 8-5.  Adam Lind came off the bench, and fell behind on the count.  One pitch to win the game, and Gutierrez reared back with all his might and threw it towards home and Lind was ready and swinging and wham there it goes, it's a low one and maybe it would drop and rattle around like balls have a tendancy of doing in the deep parts of Chase Field and it wouldn't be so bad.  But no, that ball went just over the right wall by the foul pole, into the visiting bullpen, and Gutierrez looks exactly like every home fan watching.  He can't believe it.

Well, that would be it for Gut, after giving up a double to Lewis.  Chad Qualls answered the call, and trotted out to give his best shot for the third day in a row.  Three wins in a row, that was all that was on the line here, and maybe Qualls felt it on the first pitch he threw for a ball.  Aaron Hill, the batter, was thinking home run, Qualls knew, the umpires knew, every damn fan tied to their TV sets and radio boxes and at bars and in the stands knew it right then.  Hill was swinging for anything, for a tied game, for extra innings.  On the second, third pitch, he swung.  On the second, third pitch, he missed.  Then, on the fifth pitch he swung with all his might and made contact.  This ball was going to center, this one wasn't foul or a miss but straight to center, and Chris Young was there.  Third out, third win, third time in a row by Qualls. 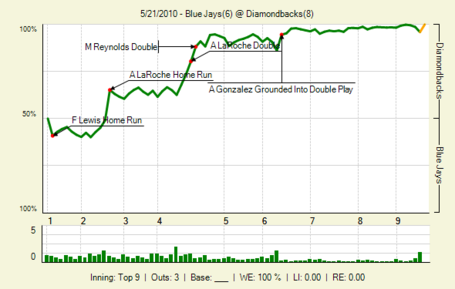 But We Know In Our Hearts: Juan Gutierrez -2.4%

One of those interesting FanGraphs, the kind we talked about in the GDT where the historical average suggests that the two home runs in the 9th were actually not as good for the Blue Jays as the double.  Of course, that's a load of bullocks for anyone was watching the game, since it didn't feel like we were going to win 98.7% of the time after that second home run.

Tomorrow the inter-league experiment continues around the league, except for the Pirates and Braves who still have to schlub around in an all NL contest.  The Diamondbacks send out Edwin Jackson tomorrow, hopefully not as a tee-ball tee, and the Blue Jays counter with Dana Eveland. First pitch is at 5:10pm AZ time, so get some rest in the meantime.