Tim Lincecum was his expected dominating self this evening, shutting out the Diamondbacks, and leading the Giants to an unsurprising victory at Chase Field this evening. Sheesh, that's what I get for writing the recap this afternoon. Hell, even the one I wrote in the middle of the sixth inning was largely useless, starting as it did, "While the end result of this one was as expected, the method by which it was accomplished was not."

If you'd told the Arizona hitters they'd have seen the last of Lincecum on the mound surrendering a 5-2 lead after five, they would have pounced on that like Lindsey Lohan on [reference deleted by request of the SB Nation lawyers]. However, Rodrigo Lopez failed miserably to respond to being given a lead: he faced four batters, all of whom scored (with a little help, inevitably, from the bullpen). But in what could well be the most entertaining game of the year - though my blood-pressure may beg to differ - Arizona battled back, scoring the winning run on a wild pitch to sweep the Giants out of town.

Details after the jump, just as soon as I finish running about the house with my shirt over my head.

The first half of the game basically went as expected. Lopez was solid enough, but gave up a couple of runs through five frames of work, on a double in the first by the Buffet Slayer and a sacrifice fly in the fourth. However, he also pitched out of some jams very nicely, such as not allowing a man on third with one out to score in the fifth. Still, it wasn't good enough because, while Lincecum was showing some spots of wildness [including a walk to the opposing pitcher], the Diamondbacks were held hitless the first time through the order, and had not been able to capitalize on the opportunities presented to them.

That all changed in the bottom of the fifth, with the Giants 2-0 up. With one out, Kelly Johnson singled, Conor Jackson walked, and Stephen Drew rifled a two-run triple down the line into the right-field corner. There then followed a couple of very impressive at-bats. Justin Upton did what was needed, sending Drew home with a sacrifice-fly to right-center. And, after a walk to Adam LaRoche, Mark Reynolds... Well, it didn't look too good, as he swung at some awful high slop from Lincecum. But he worked the count full, and then crushed a pitch into the second-deck down the left-field line. Dancing around the living-room followed.

Unfortunately, it wasn't long before the dancing was replaced by what can only be described as a sort of hunched-over moaning. The Giants greeted the previously decent Lopez by going homer, homer, walk, single, and that was his night done [his final line: six earned runs on ten hits and two walks in five innings of work]. Carlos Rosa came in, and got a ground-out to advance the runners, and a sacrifice fly to tie the game. Hinch then chose to walk Buffet in order to get to the left-handed Huff - again, one wonders if the lack of a left-hander in the bullpen was a problem. For Huff slammed a two-run double and the Giants were ahead 7-5.

It was the Diamondbacks' turn to show some intestinal fortittude. And after Esmering Vasquez pitched a perfect top of the seventh, in the bottom of the inning, our offense did just that. Back-to-back doubles from LaRoche and Reynolds closed the gap in half, and pinch-hitter Chris Young drove in Reynolds with another double, to tie the game at 7-7 after seven innings. It was Aaron Heilman's turn to come in and pitch, and he was as rock-solid as Vasquez, retiring the Giants in order for the eighth with a couple of strikeouts.

Our half of the inning started with a double by Jackson, and one out later, San Francisco walked Upton to get to LaRoche. Two crucial bits of baserunning followed: one will show up in the box-score, one won't. The former was Upton's hard but fair slide into second, breaking up a potential double-play on a LaRoche grounder - instead of the inning being over, there were men on the corners. And during the next at-bat, a ball got just far enough away from the SF replacement catcher, to allow an alert Jackson to scurry home, as he fumbled on the throw to the plate. The "Woo-hoo!" CoJack let out as he went into the dugout may have been my favorite moment of the season so far.

The ninth? Our bullpen with a one-run lead? Yeah. Interestingly, AJ Hinch left Heilman in for the start of the ninth - a move which makes sense because he was facing a pair of left-handers, and they had been only 5-for-34 off Heilman. Make that 5-for-36 now. But it's never easy, and Heilman then walked the right-hander to put the tying run on base. At 26 pitches, Hinch went to Qualls, who struck out the next batter on three pitches, and complete a completely unexpected, and entirely delightful, victory for the Diamondbacks.

So much credit to go around. An offense which showed great patience, taking nine bases on balls, tying a season high and giving then seventeen for the two-game series. Jackson walked three times, as well as his crucial double and run-scored, while Drew, LaRoche and Reynolds each had a couple of hits, and Johnson had a hit and a walk. Praise must also be given to the bullpen, who allowed one hit and two walks in four innings of work, one of their most impressive showings of the season. If they had given up any additional runs, it could have become very tricky, but they held firm when we needed them most.

Of course, we should have known victory was in the bag, when Reynolds drove in the sixth run. I was going to point out in the GDT - but, understandably thought better of it - that we are perfect when scoring more than five runs this season. That record still stands, at 14-0. Indeed, the team has now won 25 straight such contests, dating back to August last season. So, what were we all worried about? Well, the fangraph should be a good indicator - I am tempted simply to replace it with a picture of a defibrillator ["Clear!"], but here you go. I'll be making an assault on the South Face of the Fangraph, just as soon as I assemble a team of sherpas. 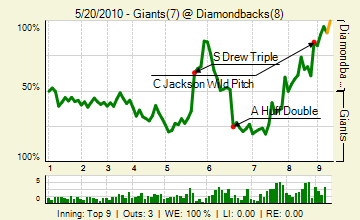 It's been a while. That was the first time since May 4 we have put together consecutive wins, and we have now tied our season-high winning streak. At two. We'll see if we can enter uncharted territory tomorrow evening, as we enter interleague play against the AL East, with the arrival of the Blue Jays.