This is what we are facing tonight, people: 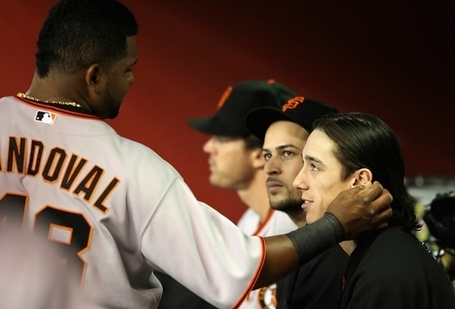 I trust no additional comment is necessary. Line-up and, I trust, unabashed mockery of this touching moment in the Giants dugout after the jump.

Of course, I am personally above such childish behavior. But if you feel the picture needs additional sparkle - and who could argue with that? - then please, by all means use this site to "enhance" it. The address of the photo for such purposes is
http://cdn2.sbnation.com/imported_assets/460610/tumblr_l2pb9xpb5o1qzz2q6o1_500_medium.jpg
Let the lampoonery begin.

Yeah, making fun of Lincecum probably counts as tweaking the tail of the tiger: we mock what we fear. No-one has tagged him with a loss this season, and he is eight-for-eight in quality starts. That said, he did walk five batters last time out, and if it hadn't been the hapless Astros he was facing , things might not have ended well for Timmeh. It'll take our hitters to be on their best games if we want to win this, and also Lopez to turn in another strong performance, like Ian Kennedy did last night. The numbers for the D-backs aren't pretty: here are the individual ones with more than 10 at-bats and, on the last line, the total for our roster.

In case you're wondering, LaRoche has the home-run, and is 1-for-6 lifetime. Upton and Jackson are respectable enough, but it's all downhill from there. Still, the good thing about going in expecting a loss is, you can either be pleasantly surprised, or get to say, "Told you so." I'll be back for the recap later, and expect to be about for most of this one.