Diamondbacks 13, Giants 1: Jacks (for) the Giant-Killers

Share All sharing options for: Diamondbacks 13, Giants 1: Jacks (for) the Giant-Killers

There's not much middle ground with this team right now. The average margin - be it victory or defeat - over the past five games has been a whopping 9.2 runs, with only one of those contests being decided by less than eight runs. Two have been blowout losses, but tonight saw the boot firmly on the other foot. And speaking of appendage wear, the Diamondbacks had brought their hitting shoes with them, swatting six home-runs, which tied a franchise record for a single game, and was the most ever by the team at Chase Field.

Me, I missed it. The anticipated 24 marathon got blown out due to the absence of SnakePit Jr, and I then spent the latter half of the evening repairing a trio of hacked websites. Not really my idea of fun. This is still ongoing as I type, but is not universally bad, since Azreous got swamped at work, so I can do the recap as I wait for backups to load. Details of tonight's home-run derby, and the estimated 2,477 feet of goodness that resulted, after the jump.

San Francisco got on the board first, Sandoval driving in the first run just after some idiot pointed out that Pablo the Buffet Slayer only had three home-runs the entire season. Hey, if that's what it takes to generate an offensive outburst from the team, it's a price I am happy to pay. Adam LaRoche got the score back level in the second inning, with a solo shot to right, and Justin Upton gave Arizona the lead for good in the fourth. I did happen to bump into that hit, and it really didn't look like a home-run off the bat; it seemed like he golfed it, but it ended up a good five rows deep into the bleachers.

The key blow, however, came in the fifth. Ian Kennedy led things off with a single, and a walk to Kelly Johnson, followed by a wild pitch, put men on second and third with no-one out for CoJack. He failed to do anything with the chance, and the groans echoed loud and wide as he fouled out to first. However, Stephen Drew picked up his team-mate in impeccable style, hammering a 2-0 pitch from Todd Wellemeyer into the right-field bleachers, to make the score 5-1 to the Diamondbacks. And the rest is, more or less history, with a two-run homer by Chris Young basically ending the game as a meaningful contest in the sixth.

However, Arizona weren't finished, scoring no less than six times in the eighth off former Diamondback Brandon Medders - though I certainly find myself wishing we could carry those six runs off the Giants bullpen forward to tomorrow, when we face double-Cy winner Tim Lincecum. Still, enjoy them this evening we did, with Snyder doubling in a run, Kelly Johnson swatting his league-leading 12th home-run to score himself and Snyder, and the final icing, LaRoche's second long-ball of the night, a three-run shot.

Remarkably, the six home-runs were the majority of Arizona's 11 hits: we're the first NL club to have six HR in a game since the Reds against the Brewers in August 2008. We were also the first to do so while getting more home-runs than all other hits, since, again, the Reds, who homered six times with only four other hits, against the Cubs in April 2006. As well as LaRoche's two bombs, Upton and Snyder each had two hits, the latter adding a walk. Johnson and Drew each also reached safely three times, both men walking twice in addition to their home-run, as the team piled up eight walks all told.

Somewhat lost in this supernova of power hitting was another excellent outing by Ian Kennedy, who restricted the Giants to one run in eight innings. He settled down very nicely, and even survived a ball pinging off his thigh in the third. The Giants managed only one hit the rest of the way after Buffet's RBI single. Kennedy walked three, but struck out a career-best nine, and retired 13 consecutive batters. It was the longest outing of his career, as he threw a total of 116 pitches, five more than his previous high, set on April 24th against the Phillies; it's already the fourth time he has thrown more than 110 in a start. Chad Qualls came in for some work and pitched a scoreless ninth.

Smallest crowd of the season at Chase, only 17,073 - though, frankly, given the way we played on the last home-stand, and the competition of the Suns playing being on the court with the Lakers in a post-season contest, I can't say I am too surprised by that. Said manager AJ Hinch after the game, "That's as much as you can ask from our team. All the way around we played pretty flawless baseball. That was good to see and a long-time coming." I've a feeling tomorrow night, we may not find things quite as easy... 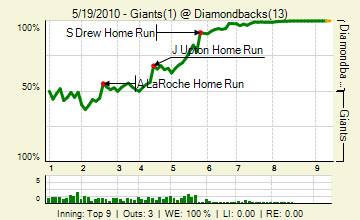 One of the quieter Gameday Threads of late, with a number of the usual heavy-hitters out of commission for one reason or another. JoeStock was the busiest with Rockkstarr12 just shy of three figures, and BattleMoses in third. Also present: DbacksSkins, LoveMyDbacks, Clefo, 4 Corners Fan, SenSurround, Wailord, kishi, hotclaws, katers, emilylovesthedbacks, soco, Dallas D'Back Fan, snakecharmer, Snrborn (welcome!), bradley281 (welcome!), MidnghtDrgn, Zephon, Hogan, Zyxwvut07 (welcome!), Wimb and Reynolds rapper. Nice to see three rookies making their GDT debuts this evening: you clearly brought us luck. Or I should stay away more often, I'm not sure...

Good to get that run differential heading back our way for once, and it was the biggest margin of victory for the Diamondbacks at home since we posted the same score against the Cardinals in September 2006. The six home-runs send Arizona back to the top of the table for those in the NL: we have 51, with Milwaukee next on 48. Perhaps surprisingly, it's not all that many above what the Diamondbacks had at the same point last season - they had hit 47 at the same stage. However, we have scored 42 more runs in total, though as you would probably expect, we've conceded a lot (50) more too.

Right, I'm off to bed. There'll be a Dan Haren piece popping up in the morning [pre-scheduled in case you're wondering how I apparently managed it on about 5 1/2 hours sleep!], and we can look forward to dealing with Lincecum tomorrow night. Another thirteen runs? Don't mind if we do...