Diamondbacks 5, Cubs 10 - I Should Have Studied

Share All sharing options for: Diamondbacks 5, Cubs 10 - I Should Have Studied

Well, that sucked.  Really not much else to say, this game was awful almost from the very beginning and stayed awful throughout.  Our starter, Edwin Jackson, went four innings and didn't strike a batter out, giving up a walk and two homers.  Over at the other dugout, Cubs starter Tom Gorzelanny struck out ten over 7 innings after striking out only 17 in 22 innings prior to today's game this year, many of these strikeouts coming in key situations.  The rest of the gruesome details follow the jump.

The game started off optimistically enough, as we threatened against Gorzelanny in the top of the first inning.  After Tony Abreu popped out to begin the game, Stephen Drew and Justin Upton reached base on a single and a walk.  With one out and two on, we had Mark Reynolds and Chris Young coming up against the left-handed Gorzelanny.  Sadly, Gorzelanny went Super Saiyan, turned into Randy Johnson circa 2001, K'ed both of them, and averted the crisis.

So we ventured to the bottom of the first, dreaming what would turn out to be merely dreams of getting back at a seemingly-hittable Gorzelanny in future innings, to find that Edwin Jackson was not so successful at crisis-aversion.  With Kosuke Fukudome on first and one out, Derrek Lee singled to left and Fukudome barely beat a throw from Cole Gillespie to third base.  Marlon Byrd then grounded out to Mark Reynolds (with a nice running throw by Mark and a good stretch from Rusty Ryal at first), scoring Fukudome and advancing Lee to second.  In what wound up possibly being a game-changing at-bat, Chad Tracy broke his season-long funk and smacked a two-out single to score Lee for Tracy's second RBI as a Cub.  We were quickly down 2-0 with Alfonso "Blind Squirrel" Soriano up to bat.  Sadly, that moniker, which had been very appropriate prior to this series, has definitely not applied against the D'backs, as EJ hand-fed him yet another nut, and Soriano deposited it deep in the left field bleachers for his third (but unfortunately not his last) home run of the series, a two-run blast.  Mike Fontenot then singled, but Geovany Soto flew out to center to stop the carnage at 4-0. 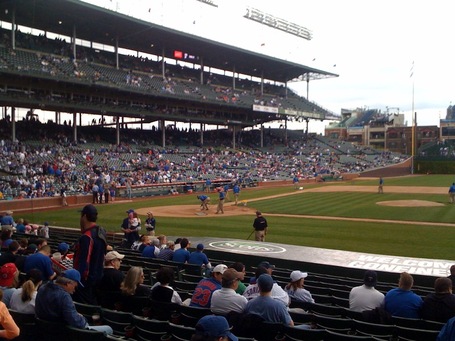 After a quiet second, the Diamondbacks again threatened Gorzelanny in the top of the third. After an Edwin Jackson K, Abreu doubled down the left field line to bring up Drew, the only D'back who had managed a hit off of Gorzelanny the first time through the order.  Clearly afraid of the only lefty in the Arizona lineup, Gorzelanny walked him on four pitches to bring Upton to the plate.  Upton worked an 0-2 count to 3-2, but Gorzelanny blew a fastball by him for what was already his sixth strikeout of the game.  Reynolds also took Gorzelanny to a 3-1 count, but struck out on ball four and ball five to end the inning and keep Chris Young, he of the 2.350 career OPS against Gorzelanny, in the on-deck circle.

So, to begin the bottom of the third, EJ tried to see if he would get a similarly-happy strike zone against Derrek Lee.  He did not, and Lee walked.  This brought up Marlon Byrd, who quickly smacked a homer to left field to begin putting the game officially out of reach at 6-0.  Tracy singled again, and the B.S. doubled to put runners on second and third, still with nobody out.  Jackson got Fontenot and Soto to ground out to Drew, with only Fontenot advancing the runners and allowing Tracy to score.  Gorzelanny then flied out to end the inning at 7-0.

The D'backs finally put up a couple of quick runs against Gorzelanny in the top of the fourth, courtesy of a CY single and Rusty Ryal home run, but the game was still far from close at 7-2, and the subsequent 3 consecutive outs Gorzelanny recorded of Gillespie, Hester, and Jackson re-established that Tom was clearly in control. 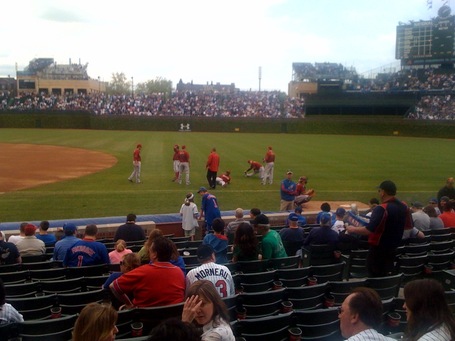 With EJ still on the mound in the bottom of the fourth, Theriot "singled" to third base on a ball that went off of Mark Reynolds' glove, and Fukudome floated a single over Stephen Drew, these two cheap hits not being what Edwin Jackson needed.  Not to mention the fact that Derrek Lee was now at the plate.  After a pitch got away from John Hester, allowing the runners to advance, Lee hit a sac fly to Young, who made a solid play in conceding the run and nailing Fukudome at third, albeit on a bad call (no, that is NOT a sufficient make-up call).  Marlon Byrd lined out to Rusty to end the inning at 8-2.

After a quick top of the fifth by Gorzelanny, Daniel Stange came in and promptly made things worse.  He walked Tracy and fed the B.S. his fourth nut of the series, making the score on the day Blind Squirrel: 2 home runs, D'backs: 2 runs of any sort, and 10-2 Cubs.  Stange allowed a walk to Soto, but got out of the inning without any further blemishes.  Also, Stange recorded the ONLY strikeout from a Diamondbacks pitcher today in this inning, K'ing Theriot.

The rest of the game really passed by without anything of note until the top of the ninth.  Kevin Mulvey did pitch two scoreless innings in the sixth and seventh, although he allowed three hits, a walk, and struck out nobody, a pretty underwhelming performance.  There was a little excitement in the ninth as the D'backs rallied against Jon Grabow, with a John Hester walk, a Tony Abreu double, a Stephen Drew triple, and a Justin Upton single driving in three runs to bring the score to 10-5.  However, Mark Reynolds had one of the worst at-bats I've seen in a long time, totally failing to put his bat where his mouth was in calling out the bullpen, striking out on three swings on change-ups low from Grabow.  Finally, CY also K'd to end this miserable excuse for a game. 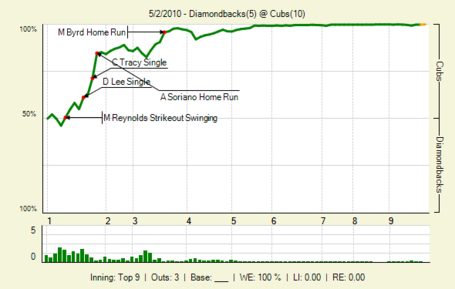 EJ's last two starts have seen him cough up 18 earned runs in 6.1 innings of awfulness.  Looking forward to an e-mail from paqs trying to declare the Scherzer deal a total and utter failure (though Max didn't help Haris' cause in his last start).  Who'd have thunk that Ian Kennedy would be the best pitcher (according to WAR) from that trade this year?  Mind-numbing.  I imagine that this team is really looking forward to getting out of Wrigley Field.  It's official, we'll see Cesar Valdez starting tomorrow against the Astros.  Great time to find ourselves playing the NL's punching-bag if you ask me.

GDT was fairly busy today, although it was mainly depressing and angry, with 957 comments when I got around to this part of my recap, making that clearly the official number we should all adhere to.  'Skins led with 158 comments, followed by me and April getting over 100 comments.  Also present:  NASCARbernet, Wailord, kishi, snakecharmer, 4 Corners Fan, soco, downtownbaxfan, BattleMoses, emilylovesthedbacks, ZonaBacks10, Jargamus Prime, Jim McLennan, hotclaws, pygalgia, Dallas D'Back Fan, acidtongue, PhoenixFly, IndyDBack, nargel, UCLADodger32, Turambar, dima1109, brian custer, and katers.

[Edit. Added some pics, taken by Jargamus Prime at the game]