Diamondbacks 0, Marlins 8: Saul of the Bullpen

Share All sharing options for: Diamondbacks 0, Marlins 8: Saul of the Bullpen

Saul Rivera allowed five runs in the 6th inning and the D-Backs offense was no where to be found. Move along folks, there's nothing to be seen here. That is, unless you enjoy watching us suffer, then this is definitely the place for you. More of the same after the jump.

Hanley Ramirez was given the day off so he could sit in timeout and think about what he did. It was the perfect segway for the D-Backs to take advantage of the Marlins and kick them when they were down. Their star was out, the dugout was moody, and they were coming off a game in which they didn't really contend. None of these factors mattered though. The D-Backs countered with absolutely zero offense and the bullpen didn't help either.

Billy Buckner was called up prior to the game and given the nod for the start. It was his first start back with the club dating back to October 2nd of last season. He, in routine fashion, showed glimpses of why we should love him and hate him. He pitched effectively until the fourth inning where the wackiness from the previous game happened again. With two outs and a runner on first, Buckner hit Gaby Sanchez and walked Brett Hayes on four pitches to load the bases. A quick meeting on the mound was held and then he was back at it - it being hitting more batters. He hit SS Hanley Brian Barden to let in the first run of the game. Fortunately, Josh Johnson was up next, and he promptly hit a groundball to end the inning. One hit, one four pitch walk, and two hit batters. It's been that kind of year.

There's not much that can be said for the D-Backs offense beyond this point except for that shining moment when they notched the second, and last, hit of the game. It was - drumroll - a Billy Buckner single. That's right, only two hits in the game and one of them was from Billy Buckner. The other honor belonged to Justin Upton who hit a line drive back in the second inning. You have to hand it to Josh Johnson for pitching such a great game, but at the same time you have to expect more from an offense that was insanely destructive to start the season. You'll have to ask Jim when the last time the D-Backs only managed two hits, but I definitely think it's been a while.

Buckner went back out for the fifth and allowed back-to-back doubles to Dan Uggla and Jorge Cantu to allow the second run of the game. He ended the threat and then left the game with a line of 5 IP, 6 hits, 2 earned runs, one walk, and four strikeouts. Not terrible by any stretch, but you have to wonder what went on in that fourth inning. He literally lost all control of his fastball for six minutes while he plunked the bottom of the Marlins order. I have always wanted to like and believe in Buckner so I'm going to take the positives from this outing and run with them.

Cue Saul Rivera and the bullpen. His first appearance with the club and he fitted right in. Like Mark Grace said, "I hope we didn't give up too much cash for him." In the sixth inning, Rivera allowed an RBI single to SS Hanley Brian Barden and then a three run homerun to Cameron Maybin. To top it off, he allowed another homerun to the next batter Dan Uggla. I have to commend Saul's effort to help my fantasy team, but man, that was awful. He walked two, allowed four hits, and five runs. Why are we trading for (mostly) unproven relievers when we could simply try out what we already have back in Reno?

Juan Gutierrez pitched a scoreless seventh while striking out two and walking one. Our other new acquisition, Carlos Rosa, got the ball for the eighth and quickly did what all good D-Backs reliever do, he stunk. He loaded the bases without recording any outs. Thankfully, he managed to get out of the debacle with only one run allowed. Still, we have to wonder when this stuff is going to end. 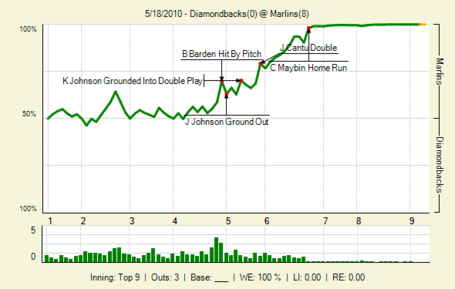 Quick note: Mark Reynolds made a great barehanded catch and throw in bottom of the fifth to get Maybin out at first. It was such a nice play that I decided to check out Reynolds UZR. So far this season, he's sitting at 2.4. If you don't quite know what that means, well, he had an -11.4 and a -11.0 for the past two seasons. In other words, he's turning into a really great third baseman.

571 comments for a 10:05 AM game in which we lost 8-0 isn't too bad. soco took first place with DbacksSkins and unnamedDBacksfan behind in that order. The rest of the group contained: katers, pygalgia, GuruB, MidnghtDrgn, Clefo, SenSurround, jonny-yuma, hotclaws, BattleMoses, kishi, 4 Corners Fan, Jim McLennan, that super awesome guy - Sprankton, Dallas D'Back Fan, snakecharmer, VladHammer, blue bulldog, zeusmith, brian custer, EstiloZz, and Muu. I wasn't around the GDT a whole lot but it seemed friendlier than it had bee the past few times I was in there. Lately, I've just been too afraid to even go near it.