Highlights from today's game:
a) The speedy Hanley Ramirez became a lumbering sloth
b) Tony Abreu got called out while standing on Dan Uggla's glove.
c) Stephen Drew drove the ball into two sure-fire outfield web gems
d) A runner out at home, trying to score from second on a ball that never left the infield.

Oh, and Edwin Jackson - he of the 7.43 ERA - pitched eight shutout innings, took a no-hitter into the fifth, and struck out a career-high dozen batters. Details of it all after the jump.

There was a 32-minute rain delay before we could get under way in Joe Robbie Pro Player Dolphins Dolphin Land Shark Sun Life Stadium [that never gets old. Much like the park's name...]. Yes, I know: rain in Florida in May. It's inconceivable, isn't it? The sooner the Marlins get that retractable-roof park built, the better - and I trust it will also have enormous bug zapper hanging from the rafters. Still, it didn't seem to affect Arizona too badly, an RBI single from Drew driving in Conor Jackson, though Drew was out stretching at second. But it was the bottom half of the inning where things started to get...interesting.

Ramirez fouled a pitch nastily off his ankle, and though he stayed in the game, that decision hurt the Marlins. He immediately hit into a double-play he'd probably have legged out if healthy; worse was to come, when Tony Abreu fisted a pitch to shallow-left for a single with two men on in the second. Not only might a fit Ramirez have snagged it, he wouldn't have punted the ball [there's no other word for it] into the left-field corner, then lumbered after it like a reluctant glacier. The Marlins benched him at the end of the inning (replaced by former D-back Brian Barden), but we appreciated all Hanley's contributions to that point.

It was particularly fortunate, since the run-scoring offense then took a vacation until the ninth, despite Drew, who was twice robbed of extra-bases by highlight-reel plays from the Marlins outfielders. Further weirdness ensued for Abreu in the fourth. He doubled down the line, and did that "slide-and-hop-up" thing at second base. However, he was not standing on the base. He was actually standing on Uggla's glove the entire time. When the ump got closer, he realized Abreu was on the glove and the ball was in the glove, and called Tony out - ironically, just when Abreu moved his toe to be on the base.

Jackson, meanwhile was proving wildly effective. Despite sending at least five pitches sailing or bouncing past John Hester to the backstop, hitting poor David Ross with another, and a first-strike percentage barely at 50%, he no-hit the Marlins through four innings. However, Darin Sutton drew fairly ostentatious attention to that at the start of the fifth, and the no-hitter evaporated like morning dew to the next batter. Still, he shut out the Marlins, helped by an insane base-running attempt to score from second, on a ball knocked down with a diving-stop by, inevitably Abreu - the runner thought Tony would throw to first, but he instead went home and the ball was waiting in Hester's glove.

The big difference for Edwin tonight seemed to be that he had no problems pitching inside. Sure, that led to the hit batter, and a few other Marlins moved off the plate in a hurry, but that may have been the point. Jackson seemed to get better as the game went on, with his best inning probably being the seventh, where he struck out the side, causing Uggla to smash his bat in frustration. He ended the night on 114 pitches, having allowed only four hits and two walks, while striking out 12. He became only the second D-backs starter with a dozen K's on the road since 2004 - Brandon Webb (remember him?) fanned 13 at Petco in April 2007.

The offense finally bothered to show up in the ninth, a sacrifice fly by Jackson driving in John Hester. We did reach double-digits in hits, with two apiece for Justin Upton, Adam LaRoche, Abreu and Hester, while Jackson got a hit and a walk. It made things a little less nervous in the ninth, where Aaron Heilman lost the shutout, allowing a couple of hits. Things would likely have got a good deal more nervous, if not for a great running catch by Chris Young on a deep drive that went about 400 feet to right-center. Still, another strikeout preserved the W, and we can all get some shuteye before tomorrow's game - first pitch, 10:05 am, folks! 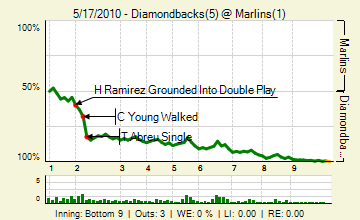 680 odd comments, but as the rollcall tool is broken at time of writing [our team of crack techs i.e. 'charmer, is working on it as we speak], I don't have any more details than that. Maybe the tool went on strike due to the ongoing lack of 'Skins from the GDTs? We'll fill that blank in later. Still, at least one Arizona team won today...

NOBODY PANIC. It's fixed. I (snakecharmer) led the way with 112, and I was the only one to hit triple digits. Dallas was hot on my heels at 91 and hotclaws not far behind at 78. All present were: BattleMoses, Amit, MidnghtDrgn, snakecharmer, hotclaws, SenSurround, katers, Wailord, Clefo, justin1985, jonny-yuma, 4 Corners Fan, Dallas D'Back Fan, Jim McLennan, njjohn, Fiona, Torpedosneak, Rockkstarr12, unnamedDBacksfan, eel, Sprankton, brian custer, rdf8585, venomfan, and kishi .