In this three-game series, we had starts from the 25-year-old Ian Kennedy, 34-year-old free-agent scrap-heap pickup Rodrigo Lopez, and "Staff Ace" Dan Haren.  Kennedy got screwed out of a win by the bullpen.  Lopez didn't give the bullpen a chance to screw it up.  Haren?  Well Haren just sucked today.  He lasted just 4.1 innings and gave up seven runs (six earned) on eight hits, recording as many strikeouts as home runs allowed (two) and walking three.  Nothing good to say for Haren today, as his ERA rises to 4.83, and his $12.75MM salary figures for 2011 and 2012 become more and more worrisome.  The rest of the gory details after the jump.

The Braves, on the other hand, received quite the start from their own Ace, Tim Hudson, including a stretch where he retired 14 straight Diamondback hitters until Cole Gillespie's two-out single in the sixth inning.

The Braves jumped on Haren from the get-go, and it was clear that Haren didn't have his best stuff today.  His cutter sat around 88-89, and he left multiple splitters up in the zone.  But is it just me, or does it seem like we've been saying that every time Haren takes the mound?  Regardless, after Hudson's K-K-K first inning, the first batter to face Haren, Martin Prado, belted his first homer of the day and of the season (and there was another coming from him, too) over the left field wall. It only got worse from that mother of all run-on sentences.  Jason Heyward walked, and after Haren retired Chipper Jones about five months too early (ba-dum tish!), Troy Glaus grounded a single to a wide-open gap to right field on a well-executed hit-and-run, moving Heyward to third base.  Eric Hinske plated another run with a sac fly on a hanging splitter, and Haren got Yunel Escobar to pop out in foul territory to stop the bleeding.

The top of the second showed a glimpse of fight from the D'backs, as the first two runners got on on a single by Adam LaRoche and a walk to Mark Reynolds.  Stephen Drew sacrificed them over, apparently without the blessing of manager A.J. Hinch, to give us runners on second and third with just one out.  Chris Young then hit a grounder to shortstop that scored LaRoche, but Mark was caught trying to take third base, taking runners out of scoring position.  Chris Snyder grounded out to third base, and the once-promising situation ended with just one run crossing the plate.

The next twelve outs were fairly uneventful, with the only real threat being a two-on, one-out jam that Haren escaped in the third.  The bottom of the fourth saw the Braves tack on another run on a walk, a wild pitch, and a double by the pitcher.  This was really the inning where it was evident that this game was teetering on a tightrope, but we remained naive and hopeful that the offensive explosion we saw yesterday against a seemingly-dominant Tommy Hanson would return today.  But Hudson was in the middle of what would be a streak of 14 straight retired batters, and a single from Cole Gillespie would only spark another five straight outs, a Chris Young single that was immediately canceled by a double-play, giving Hudson a final line of eight innings, six strikeouts, one walk, three hits, and one earned run.  Absolutely dominating.  Eric O'Flaherty came in and got the final three outs in a 1-2-3 ninth.

So enough on the Diamondbacks' offense, let's talk about our fabulous pitching!!!  Haren self-combusted in the bottom of the fifth, beginning with a horrific double-error by Adam LaRoche that allowed Heyward to not only reach base on a grounder to first, but get to second base on an interference call.  After Chipper lined out, Heyward stole third base and Glaus singled him home to put us down by three.  Then, Hinske came up and crushed a homer to left field, and the gap was five, and Hudson's presence made the game feel simply out of reach.  And it was.  The Braves tacked on another run on a couple of doubles by some guys.  Sorry, the game just ended, and I'm not spending much more of my life remembering this game.

Cesar Valdez gave up a couple of runs in his 1.2 innings of work, looking extremely uncomfortable in his first relief work of the season.  If you ask me, I'd have him in Reno if we're not going to start him.  Esmerling Vazquez threw a scoreless inning, but loaded the bases in the process.  Then entered Bob Howry, to put the final nail in the coffin of his time with Arizona.  He gave up a lead-off home run to Glaus, and quickly putting to rest any fears that he might have a decent outing.  He followed by serving up a double to Brent Clevlen, and back-to-back-to-back walks to Yunel Escobar, Nate McLouth, and David Ross, scoring Clevlen, and forcing Hinch to put in Blaine Boyer.  Boyer quickly got pinch-hitter Melky Cabrera to ground into a double-play, scoring Escobar and putting McLouth on third, but then coughed up a single to Martin Prado, scoring McLouth.  Heyward finally grounded out to second, and the hemorrhaging was over.

Taking a tip from Mr. McLennan, here's today's fangraph, and a link to an awesome cover of a Randy Newman song: 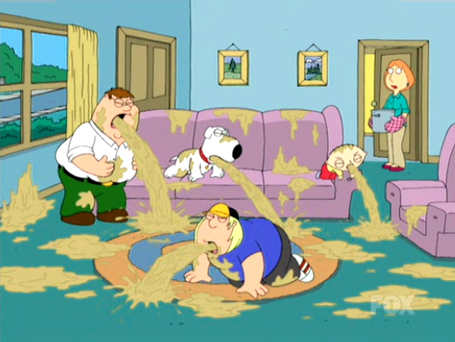 Nobody cracked 100 comments today due to the continued absence of 'Skins, and I led the way with a mere 90 comments, followed by Dallas with 56 and April with 55.  Also present for the depression were soco, BattleMoses, 4 Corners Fan, pygalgia, hotclaws, katers, Clefo, emilylovesthedbacks, MidnghtDrgn, Zephon, Azreous, snakecharmer, Jim McLennan, kishi, piratedan7, Wailord, diamondintherough, brian custer, and VladHammer.

It's been real, everyone.  Hold the fort while I'm gone, and I'll see you at the end of August.