Our microphones in the dugout picked up the following exchange late in today's game, between two unidentified occupants:

Person A: Well pitched, Rodrigo. That's it, we're sending Rosa out there for the ninth.
Person B: AJ, it's only a ten-run lead! I'm still fresh!
Person A: No, you haven't thrown a complete game since 2004. Go hit the showers.
Person B: But they'll just blow it - I know they will. Hey, what's that cloth f...
[Muffled thumping sounds]
Person A: Ok, Mel. We're good to go. Call the bullpen.

I'm not sure what that all means. But the net result is, the Diamonbacks ended the seven-game losing streak in emphatic fashion, the offense firing on all cylinders, and Rodrigo Lopez pitched eight very solid innings. Boy, it's good to use a recap which doesn't involve the words "bullpen" and "blown save." Er, except there, of course.

It certainly didn't look like it was going to be a laugher through the front four innings. Sure, Arizona had the lead, on a monster bomb by Justin Upton in the first. But we had managed only one single apart from that, with Tommy Hanson carving up the line-up at a disturbing rate, with six K's by the Diamondbacks through four. In contrast, Lopez was teetering on the edge, particularly in a second inning where he loaded the bases with one out, and Nate McLouth up for the Braves. Fortunately, Lopez is incapable of delivering a 95-mph fastball, like the one from Juan Gutierrez which became bleacher-fodder yesterday: McLouth went down looking, and a zero was posted.

Arizona got some much needed breathing room in the fifth, getting four runs on five hits. There were RBI for Chris Snyder, Kelly Johnson, Conor Jackson and, to cap it off, a triple for Upton, though McLouth butchered the play appallingly, coming in for a ball which soared over his head by 20-30 feet. Lopez continued to bend without giving in - Atlanta left men stranded on third in both the fifth and sixth, but finally got a run home in the seventh, on a groundout. An RBI single by Stephen Drew restored the advantage the very next half-inning, and Lopez looked set to go for the complete game, batting for himself to lead off the ninth.

However, the offense rendered that unnecessary, driving in five more runs after Lopez had struck-out, on a solo homer by Johnson, RBI doubles from Adam LaRoche and Mark Reynolds and a two-run jack by Drew. It was still Lopez's first eight-inning outing for over four years, and his first ever in the National League. He allowed one run on seven hits, with two walks with five strikeouts, and lowered his ERA to 3.81. Carlos 'Sub' Rosa came in for the ninth, to make his Diamondbacks debut, and looked effective, albeit against the bottom of the Braves order and in a situation that can only be described as low-leverage. He had a perfect ninth on ten pitches.

On the offense, Upton fell a double short of the cycle, and has got his batting-average up to .250, thirty-two points higher than it was this time last week, having gone 10-for-25 since then. Drew had three hits and drove in three runs, while Johnson and LaRoche got two knocks apiece; Jackson and Reynolds each reached safely twice, on a hit and a walk. The team did strike out 13 times for the second consecutive game, the first time they've done that without extra innings in franchise history (they did fan a total of 27 times in a double-header in Philadelphia on August 2nd, 1998, but the nightcap went 11 frames). However, who cares, when you score 11 runs?

That was the most runs scored by Arizona this century. What? Oh, my mistake: it just feels like it. Turns out it's only the most this month, since the rubber game in Chicago where we won 13-5, and saw .500 for the last time to date. Since then, Arizona had gone 3-11, so this was a welcome step in the right direction, and with Dan Haren going tomorrow - albeit against Atlanta ace (and another former Oakland ace), Tim Hudson - we have a shot at a series win on the road. That would certainly be a pleasant surprise if we can manage it. Here's to Dan going the distance. 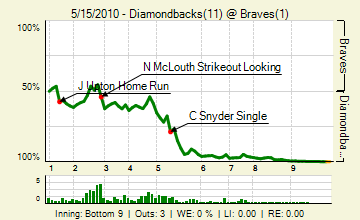 justin1985 was the only poster to crack three digits, with 'charmer and Clefo in second and third respectively - and must be the first GDT thread in a while with absolutely zero 'Skins posts - it must have been one hell of a hangover. Maybe he got eaten by Mike Tyson's tiger? Anyway, also taking part: IHateSouthBend, hotclaws, BattleMoses, katers, kishi, Wailord, Dallas D'Back Fan, Azreous, 4 Corners Fan, emilylovesthedbacks, MidnghtDrgn (welcome!), SeanMillerSavior, njjohn, Turambar, brian custer, Torpedosneak (welcome!), Rockkstarr12, SongBird and LoveMyDbacks

After a winless week, it's ironic that I didn't actually get to see a single pitch of the game: between house-hunting and Pei Wei, were were a couple of exits on the I-10 from home when Rosa got the final out. So maybe I should just stay away from tomorrow's game as well, just to be sure? It's a 10:35 am first pitch, so set your alarms [and, in my case, prepost the Gameday Thread!] for that.