Share All sharing options for: The Arizona Bullpen: Playing the Blame Game

Another staggering loss for the Diamondbacks bullpen on Friday night. The offense had taken advantage of some Atlanta miscues and early problems e.g. second and third, no outs in the first and fail to add on, to build a four-run lead. Ian Kennedy was tiring and AJ Hinch turned to Juan Gutierrez in the seventh, with tying run at the plate, albeit in the shape of .167 hitting Nate McLouth. However, he promptly swatted a three-run homer that tied things up. The Arizona offense managed to push a run across in the ninth, against one of the best closers in the game, Billy Wagner. But Chad Qualls then gave up two runs, to take the loss.

It's just another in the latest line of depressing defeats, giving the Diamondbacks nine blown saves on the year already - almost twice the average for the rest of the league (4.6). As an indication of how bad the bullpen has been at preserving leads, the Arizona record, going into Saturday's game, was only 11-6 when leading after six innings. That's a .647 winning clip, compared to .864 across all teams last season - a percentage which should have made the D-backs' record 15-2. After six, the D-backs actually have a winning record, at 18-17 (with three games tied).

There are four potential candidates for our ire: the players, the coach, the manager and the GM. While it's obvious that they all bear the share of blame, who do you think is most responsible for the current awfulness? After the jump, we'll take a look at the credentials of each.

Now, we're not major-league hitters, but take a vague guess at what the sixth pitch was - the one McLouth deposited into the bleachers for a three-run homer. If you were for some reason to pick a 95 mph fastball (and McLouth certainly did), you'd be dead right. But the real problem is less the sixth pitch, than that the first three were all balls, turning Gutierrez into a one-pitch pitcher. Walks have hurt the team, certainly, but predictable fastballs are no better.

But is there also bad luck involved? mrssimons mentioned the freakishly high BABIP of some of our relievers. Overall the team number for them, before today's game, was at .306, a little higher than league average (.300), though not much. But that conceals a wide variety of sins: Qualls must have done something to really piss off the baseball gods, sporting a BABIP of - wait for it - .455. Of the 205 pitchers with five or more innings pitched in the NL this year, that ranks second. You can also witness the pitches Qualls threw to Martin Prado before the two-run single which ended last night's game. 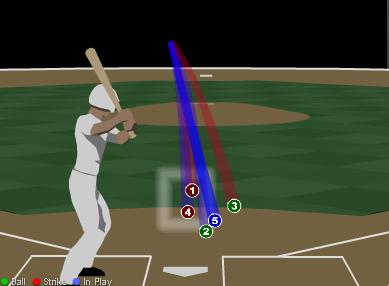 With the exception of the first pitch - a fastball down the middle that Prado fouled off - these were all thrown where Qualls wanted them, and the location of the fifth could have resulted in the game-ending double-play Qualls wanted. However, AJ Hinch was less certain of the pitch choice. "I talked to him about the slider going away to a right-handed hitter when we’re trying to get a double play ball. He gets some ground balls with his slider and gets a lot with his sinker. It’s always easy to second-guess a pitch call when things don’t go your way."

Of course, there's still the single and the sacrifice bunt which reached base to look into - that is what put Qualls into the position of needing the double-play. And there are other pitchers who don't get any kind of BABIP pass: Bob Howry and Gutierrez are at.229 and .244 respectively, so their suck is not capricious chance.

2. The pitching coach
Josh Byrnes gave his pitching coach a vote of confidence yesterday, saying, "No, I don't think it's 'Stott.' I don't think that's the case." But the numbers don't appear to point in quite the same direction. Mel Stottlemyre Jr.was hired as the Arizona Diamondbacks' pitching coach on May 7th, 2009. Starting with his first full month in charge, here are the team's collective ERAs since then:

Outside of a brief downtick for one month last year, Stottlemyre has overseen a relentless decrease in the quality of our pitchers' performances. This can be seen on an individual level too. Dan Haren has made 36 starts since Stottlemyre took over, with an ERA of 3.84. In 36 for Arizona before Stottlemyre arrived, the ERA was 3.06. Similarly, Chad Qualls: in 53 innings since Stottlemyre took over, has allowed 29 earned runs. During the 53 prior to that, only 17. Leo Rosales? Pre-Mel ERA, 4.65; post-Mel, 5.30. It's a small sample size, but I can't find a pitcher presently with the team, whose numbers have improved, in a significant number of innings under Stottlemyre.

3. The manager
When you have a magazine of ammunition that is mostly blanks, the role of the person aiming and firing the gun becomes all the more important. However, AJ Hinch has apparently been largely oblivious to the struggles, more or less rolling the same pitchers out there, in the same roles, since Opening Day. It was apparent very early on that Qualls was struggling. Indeed, you could even look at his spring-training numbers, where he had a 7.45 ERA in 11 appearances, and question whether Chad was fully recovered from knee surgery.

Now, from the outside, it's difficult to be sure what may be going on inside the clubhouse. That's especially the case with a stoic guy like Hinch, who might have been playing poker during the meltdown innings of Friday's game, for all the emotion showed. It's possible the locker-room resembles Sam Peckinpah's Salad Days. But from what I can see in the transaction log, the only move based on anything but roster need, i.e. injury or a #5 starter, was the swap of Daniel Stange for Carlos Rosa. I know we don't have many options, but to misquote Voltaire, "Dans ce bullpen, il est bon de tuer de temps en temps un reliever pour encourager les autres." I vote for it being Howry.

Instead, on the outside, all appears serene and placid. You would hardly know there was any issue with the bullpen, except for the increasingly "deer caught in headlights" favored - understandably - by Hinch in his post-game press conferences during the losing streak.

4. The GM
We previously documented the good relievers who have been traded away by the Diamondbacks, or simply allowed to leave as free-agents. I understand and agree with the general principle, of not overpaying for relief pitching - it's not the best place to spend money. But a) you must replace those who leave, and b) this is hardly a minimum-wage bunch, with the 2010 bullpen costing over ten million dollars between them. It's weird, because Byrnes' dumpster-diving exercises have proven fairly productive for starters e.g. Rodrigo Lopez. However, veteran relievers like Howry [and before him, Scott Schoeneweis and Tom Gordon] have proven an extremely poor use of resources.

The Diamondbacks don't have a margin for error. Their salary is basically at the cap, so no wiggle room there. We lack many trade chips [in the upper reaches of the system, especially] which we can move to address the obvious, gaping flaw which is our relief corps. Similarly, we don't have a lot of MLB-ready prospects. Said Byrnes over the weekend, "I don't think we want to pay double what we should in order to get a guy. And from internal mode, I don't think we want to put younger players in situations they aren't ready to handle."

But it's a bullpen of his own making - the lack of any left-hander being another commonly-heard complaint. And after a series where the Arizona relievers allowed nine earned runs in 6.2 innings of work, it's clear the current situation remains entirely untenable.