Diamondbacks 5, Braves 6 - The Word You're Looking For Is "Unbelievable"

Share All sharing options for: Diamondbacks 5, Braves 6 - The Word You're Looking For Is "Unbelievable"

Unbelievable, unsurprising, and uninspiring are the words of the night. When Juan Gutierrez gave up a game-tying home run in the 7th inning, all Daron Sutton could say was "unbelievable." When Chad Qualls walked off the mound after giving up the game-winning run, that's what he was seen mouthing. And yet nobody can possibly be surprised at the events that led to tonight's Diamondbacks loss.

Tonight was a Tale of Two Halves - a fantastic outing by Ian Kennedy kept the Braves off the board for 6 innings, a rough start by Kenshin Kawakami allowed the Diamondbacks to take a 4-0 lead, and the bullpen coughed it up again for the loss. Trust me, you don't really want more information than that, but here it is, after the jump.

Just by looking at the numbers at tonight's starting pitchers, you had to feel the advantage was to the Diamondbacks. The Braves had lost every start of Kawakami, his ERA was nearly 6, and on average he doesn't make it out of the 6th inning. Meanwhile, Kennedy had been great his last three or four outings. And Kennedy did his part to make that win happen. He pitched fast, he painted the corners, changed eye levels, and had the Braves hitters playing defense at the plate. Chipper Jones and Troy Glaus went a combined 0 for 7 with 3 strikeouts. When Braves runners did reach base, they helped Kennedy a lot by getting themselves out! In the 3rd inning, with two runners on and Jason Heyward at the plate, Martin Prado was napping and picked off at second base to end the inning. In the 4th inning, Heyward had led off with a double to the wall but was caught by Chris Snyder trying to steal third. Kennedy took advantage of these gift outs and kept his pitch count low enough to pitch into the 7th inning.

The Diamondbacks had taken an early 1-0 lead in the 1st inning off of Kawakami. The first three baserunners reached, with Justin Upton driving in Kelly Johnson who had led off by reaching on an error by Glaus at first base. (Glaus looked uncomfortable there all night.) But with one already in, two men on and nobody out, the middle of the order managed two strikeouts and a groundout and ended the threat. Everyone felt it - had the Diamondbacks just wasted a big opportunity to run up the score early? Actually, they managed to build on their lead throughout the game. Mark Reynolds walked and scored on a Chris Snyder double in the 4th inning, and then Reynolds drove in two runs (Johnson and Upton) after Kawakami was pulled in the 5th inning to make it 4-0 Diamondbacks.

Ian Kennedy was only at 97 pitches when he went out in the 7th inning, but Brian McCann deposited the first pitch he saw into the right field bleachers. Hinch left him in for a few more batters, but with runners on the corner, one out and at 109 pitches, Kennedy was pulled for Juan Gutierrez. It was at this point that soco left to go out and, I don't know, party or something for someone's birthday, someone who clearly didn't care enough about us or the Diamondbacks to have his birthday at home with television and Wifi to share in our misery. Anyway. Juan Gutierrez came in and threw three straight balls to Nate McLouth. He battled back to 3-2, but what do you think that 3-2 pitch resulted in?? If you said a game-tying 3-run home run, give yourself a pat on the back and take a swig of something strong.

But, the game wasn't over just yet. Aaron Heilman pitched a scoreless 8th inning, and who knew that Heilman would be the bullpen's best arm right now? His last 9 appearances (10 including tonight) have been scoreless, lowering his ERA to 3.55. The Diamondbacks then battled back against Braves closer Billy Wagner, thanks to Upton bringing in Conor Jackson. With a 1-run lead in the 9th, the game was turned over to Diamondbacks closer Chad Qualls. Just as Sutton and Gonzo were pointing out that Qualls has saved his last five opportunities, Eric Hinske hit the first pitch he saw to right field. Then there was a fielding error on a sacrifice bunt, a successful sacrifice bunt, and an intentional walk to load the bases with one out, looking for the double play. Qualls said after the game, "I felt like I was pitching well, I knew I was going to get the double play and win the game." Except that you weren't and you didn't. Prado came through and rifled a 2-1 pitch over Adam LaRoche's head and the two leadoff Braves runners came around to score and win the game for Atlanta. 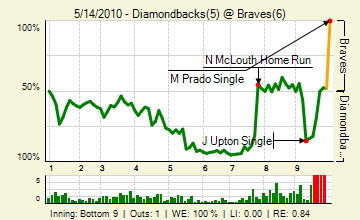 A few auspicious numbers for the Arizona bullpen - not only do they lead in bases-loaded walks, they lead in percentage of inherited runners scoring (22 of 43 - 51%) and home runs allowed (now 22). And I'm sure tonight won't help the bullpen's ERA ranking in the league, but Chad Qualls' ERA is now 7.62 and Juan Gutierrez's is 9.60. All together now - DFA.

Despite being in the lead for the first 6 1/3 innings, the gameday thread was quiet and felt depressing all night. Imagine how depressing it got when we started losing. No, you really don't want to know. Let's just say, if Juan Gutierrez is not DFA'd or placed on the DL tomorrow, I'd be surprised and most of us are going to start throwing things. soco managed to lead in comments even though he left during the 7th, 112-99 over myself, with justin piping past IHSB for the bronze. All present were: Rockkstarr12, 4 Corners Fan, Jargamus Prime, DbacksSkins, soco, unnamedDBacksfan, BattleMoses, emilylovesthedbacks, Jim McLennan, kishi, pygalgia, katers, snakecharmer, IHateSouthBend, hotclaws, mvhsbball, DBacksUA, Clefo, justin1985, skoormit, brian custer, SeanMillerSavior, Turambar, rapdawg, Azreous, IndyDBack, Friendly Visiting Blue Jays Fan zeusmith (welcome!), MyFriendCorey (also welcome), and dbacks4life.

A.J. Hinch said after the game, "It's never over, you have to play all 27 outs." Well, that's very astute, but how do you get the Diamondbacks to actually play all 27 outs? That is the difficult question we all should ponder. See you tomorrow, same bat time, same bat channel, as Rodrigo Lopez faces Tommy Hanson to try to end our 7-game losing streak.