During the broadcast of Wednesday night's game, Daron Sutton stumbled a bit trying to get across a certain bit of information about the past that Arizona was trying to avoid -- namely, that the Diamondbacks hadn't been this terrible in a homestand since the dreaded 2004 season. They lost 11 straight in one homestand that year en route to 111 losses, as most D-back fans can painfully recollect on their own. They'd been swept in three-game series since then, but back-to-back series at home? Nope. Not in six years.

Of course, that's just what they did tonight, getting outscored 52-15 in the process. That kind of margin makes it pretty easy to spread the blame around to just about everyone. And we'll do just that after the jump.

Not much to talk about in the first three innings. Both pitchers faced just one batter over the minimum; Conor Jackson led off the first with a walk against Hideki Kuroda, but was stranded at second, and Edwin worked around a leadoff single by Blake DeWitt in the third. It looked like Good Jackson was here to stick around from his previous start (7 IP, 3 ER) and not Crap Jackson from the two before (6.1 IP, 18 ER). Unfortunately, that was not the case, although Edwin wasn't the only person at fault for that. More on that later.

In the fourth, the Dodgers struck for two runs rather quickly, pairing an Ethier single with a Kemp home run to take an abrupt lead. Jackson battled back to strike out the side, but the damage had been done. The Diamondbacks fought back in the bottom half, though, using singles by Drew and Reynolds and a helpful error by Blake to plate two runs on a double by Adam LaRoche. Like the first, though, Arizona wasted two chances with RISP to do more damage.

Jackson gave up another run in the fifth thanks to a stolen base by Carroll, which put him in position to score on a base hit by Moldy Playdoh Hair. Yahoo does a nice job of pretending our offense isn't as bad as it is, as shown by their description of the inning:

Of course, there were already two quick outs before Conor pulled his base hit, but it's much more fun to pretend that didn't happen.

Edwin breezed through the sixth, striking out two more batters. Sitting at 99 pitches through six, Hinch sent him back out for the seventh. There's a lot of different ways you can go on what happened next:

He walked Carroll on six pitches. Two more pitches got him an out thanks to a sac bunt by Kuroda. Martin followed with a base hit after three pitches. He struck out Kemp on four pitches (all sliders, and the last one was a beaut) but Martin stole second. He threw four straight outside to load the bases on an intentional walk to Ethier. Two fastballs to Manny got him an 0-2 count, one pitch from being out of the inning...but the third was driven to straight away center, which turned the bases from loaded to unloaded, a winnable game to an unwinnable game, and a quality start to a....unquality start.

Amazing how quickly things can change. Should Edwin have been pulled before the inning started? (Probably not.) After a leadoff walk? (Maybe.) With the bases loaded and Manny up? (Probably, considering he was at 119 pitches by then.) Should we have intentionally walked somebody to get to Manny, when there were already two outs? (Personally, I don't think so.) It's hard to blame Hinch for not trusting his bullpen, given the past five weeks of sample data, but it seems like Jackson got hung out to dry in this spot.

The Diamondbacks only threatened one other time. In the eighth, Arizona got the bases loaded with one out, thanks to a single by Conor, a walk by Upton and a HBP for Reynolds. But all we could muster was a sac fly by LaRoche, meaning we were treated to a Jonathon Broxton appearance in the ninth. The D-backs did get the tying run to the plate after a base hit by Abreu and a nicely drawn walk by Gillespie, who laid off two pretty tough pitches outside, but Jackson and Drew struck out and that was that. A winless homestand, six straight, seven of eight, and we're buried in the NL West cellar. 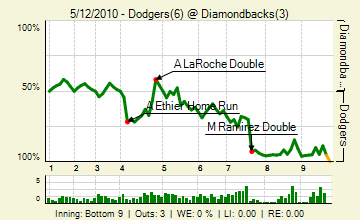 You'd think more people would show up on the bad side of the ledger here, but really that only happens in either a back-and-forth game or a big-time collapse. This game was neither -- other than the two runs in the fourth, the Diamondbacks fell behind and never seriously threatened much the rest of the way. LaRoche had two hits and drove in all three of our runs. Jackson had two hits and a walk in the leadoff spot. Reynolds had a knock and a base on balls. And that's about it. Every starter struck out at least once, continuing our horrific K trend from the past week or so. On the bright side...um, Heilman and Qualls pitched 2 1/3 scoreless innings? Yeah, I got nothing.

In the Gameday Thread, things were talkative and light despite an overarching sense of impending doom (which was something of a self-fulfilling prophecy). No epic bullpen collapse meant the language had to be restrained to its usual levels. We still made it past 1,000 comments, with soco leading the way (200+) and BattleMoses also cracking the century mark. The list: BattleMoses, soco, justin1985, LoveMyDbacks, unnamedDBacksfan, 4 Corners Fan, DbacksSkins, kishi, Rockkstarr12, hotclaws, pygalgia, katers, Wailord, Clefo, SeanMillerSavior, snakecharmer, Sprankton, Fiona, Turambar, IHateSouthBend, rdf8585, Azreous, Dallas D'Back Fan, jonny-yuma.

It's a day off tomorrow, the first since April 22 (and only one until May 24). I can't imagine that long stretch has helped the club, but then again, there are way too many problems with this team right now to try to pin it on something that simple. Besides, the bullpen hasn't been able to stay in games long enough to get fatigued. On Friday, it's the start of a quick five-game road trip with three games against the Braves. Good luck.