Share All sharing options for: Diamondbacks 3, Dodgers 7 - I must stop doing recaps

I am beginning to struggle to recall the last time I did a recap of a game which the Diamondbacks actually won. A quick check of the schedule reveals that it was only last Thursday, with Haren's complete game against the Astros: Certainly feels a lot longer than that, and I suspect the schedule is mistaken - I am thinking it has been six or eight months at least. Anyway, what was tonight's defeat caused by?
a) Ineffective offense
b) The traditional ninth-inning meltdown
c) A starting pitcher inexplicably failing to throw a perfect game
d) All of the above.

I could probably copy and paste any random recap from the past week, and no-one would notice, since it was really more of the same for the Diamondbacks, on both hitting and defense. Lopez got through seven innings, the third time this season he has gone that long, giving him an average of 6.29 innings per start so far. That's exactly the same figure as Ian Kennedy, though some way behind Dan Haren, who is averaging 7.00 per outing. The final line was seven hits and five walks - the latter was perhaps more of a surprise than the former, since he had only walked seven all season before tonight, covering 37 innings in total.

And it hurt, with two of those free passes ended up coming around to score - that's a category where Arizona pitchers have a higher percentage than anyone else in the National League. It's probably connected to the .283 BA against, which as noted in the GDT, will move the runners along the base-paths quite quickly. The big blow was a two-run double by Ethier in the fifth. It followed a walk and a single, on which Upton's throw - for the umpteenth time this season - missed the cut-off man and allowed the trail runner to reach second.

The Dodgers added a couple of insurance run in the ninth, getting to Bob Howry with two outs in his second inning of work. I was surprised to see him come out again, and by the time he'd finished, he had thrown 36 pitches. Long outings do not agree with Howry:  since 2005, in the six outings where he has had a pitch-count of 36 or more, Bob has allowed a total of 15 earned runs in 11.2 innings. Tonight, he wasn't helped by Esmerling Vasquez, who allowed both inherited runners to score before getting the final out. In the ninth this season, we have now scored just six runs, and conceded thirty.

Meanwhile, the Arizona hitters seemed to have particular problems with Billingsley's curve, chasing any number of breaking balls in the dirt. We had three walks in the first five innings, but none of them even made it past first-base. Even when a dropped third-strike allowed Kelly Johnson to reach [his bat knocking the ball away from Martin as KJ dropped it], Stephen Drew promptly lasered the ball to third and Johnson was doubled off. Through five, all we had was Chris Young's fifth home-run of the season, and a first-inning double by Upton.

Arizona's best chance to make a fight of it came in the sixth, when Stephen Drew doubled with one out, after a leadoff walk. That was enough to get Billingsley hooked, to his obvious irritation, and the reliever walked Young on four pitches, to load the bases. However, Cole Gillespie could only produce an RBI ground-out, and Chris Snyder repeated the medicine to end the chance. That was it. We got what would have been the tying run on base with no outs in the ninth - except for the hairball coughed up by Howry and Vasquez in the top half of the inning. And Conor Jackson rendered it moot, grounding into a double-play. Thanks for coming. Drive safely.

The team ended with 12 K's: it's already the tenth time they've had more than ten this season, which is the most in the National League. True, strikeouts are not really any different from any other out. But they are a significant part of why the offense managed only four hits this evening, against a pitching-staff ranked 13th in the league by ERA. As a team, the Diamondbacks have hit a collective .216 in the past week, managing only 18 runs over those seven contests, while striking-out 63 times. 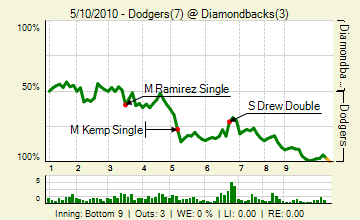