Somehow, I hoped that our bullpen would be able to put the nightmare that was April behind them. New month, fresh start - surely they couldn't be as bad as they've been?

They weren't. They were worse. Dan Haren was pretty poor, but somehow managed to deliver a quality start, and left the game after six innings with a 5-3 lead. However, Bob "Home-Run" Howry allowed his fifth long-ball in 10.2 innings of work, to tie the game in the seventh, and Juan 'Walkman' Gutierrez gave up two more runs in the eighth. We made it interesting in the ninth, putting the tying run in scoring position, but Adam LaRoche struck out swinging to end things. It was our bullpen's seventh blown save of the season - last year, that didn't happen until June 2nd, in our 53rd game - and they picked up their seventh loss of the year.

Even though Dan Haren had far from his best stuff today, he battled his way through traffic, and can be forgiven for being pissed at the bullpen, for costing him another win. That's already two games where he has departed the mound with a two-run lead, but the relievers have failed to hold it in the final third. But this was far from Good Dan that we saw on the mound: in six innings, he walked two and allowed ten hits, becoming the first Diamondback since 2007 to allow double-digits there and still deliver a quality start [you'll not be surprised to hear that the last man was Livan Hernandez, who did it three times that season].

Bob Howry is looking like one of the most dismal relief acquisitions of the winter to date. His line on the season is now:
Howry: 10.2 IP, 13 H, 9 R, 9 ER, 5 HR, 7.59 ERA
This afternoon, Howry allowed a two-run homer to Alfonso Soriano for the the third blown lead of the afternoon by Arizona- my fantasy team is grateful for the contribution, but that barely counts as a consolation, since I'd rather have wins for the Diamondbacks. Instead, in the eighth, a single, a throwing error by Juan Gutierrez, two walks and a two-run single were all the Cubs needed to provide the final margin of victory.

It would be wrong to blame just Howry and Gutierrez, since they are far from the only ones in the pen, of course. After this performance, every one of our relievers who have pitched seven innings or more this year, have an ERA north of 5.50. I know AJ Hinch and Josh Byrnes don't want to panic, but it's clear that the current crop threaten to torpedo the entire season. Every loss must be like a dagger to the heart of the starting pitchers and offense, who can be forgiven for thinking "What's the point? The bullpen will only blow the game anyway."

Speaking of which, it was the fourth straight game the Diamondbacks have reached ten or more hits, the first time we've done that on the road since August 2008.. Mark Reynolds homered twice and Justin Upton added another - neither had previously homered in a regular-season game at Wrigley. Reynolds added a walk, Upton another hit, while Gerardo Parra and Haren both had a pair of hits, and Chris Young reached safely three times, on a hit and a pair of free-passes. However, Chris Snyder - for some reason, looking supremely disinterested at the plate - struck out on four occasions for the first time in his career, and Stephen Drew was not much better, at 0-for-5 with three K's. 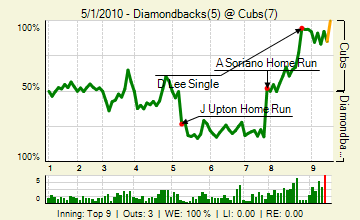 Over 1,100 comments, though hard to say how many were legitimate, since it was pretty glitchy, resulting in a lot of double-posting. 'Skins led the way - repeating other people's posts as well as his own - with NASCARberne and hotclaws cracking three figures too. Others present: kishi, soco, BattleMoses, pygalgia, 4 Corners Fan, emilylovesthedbacks, AJforAZ, unnamedDBacksfan, PioneerSkies, skoormit, Azreous, dima1109, Dallas D'Back Fan, IHateSouthBend, piratedan7, Wailord, IndyDBack, Turambar and katers. I can't seem to save the graph of comments vs. time - it keeps doing so as a 1 Kb file - so that'll have to wait for someone else to add.

A very disappointing loss, It's a game we could have won, should have won, but the bullpen coughed it up again. If we'd held on, we'd have been 4-2 on the roadtrip, with at least a split of the series guaranteed. Instead, we need to win tomorrow to avoid dropping to 3-4, and losing three of four in Chicago. Yuk. Here's to a complete game by Edwin Jackson tomorrow...

Oh, and 7pm tomorrow night, I'll be chatting to the guys at ProRumors.com about the Diamondbacks - looks to be about a half-hour chat, so we should cover a lot of ground. If there's anything you want covered [and believe me, we'll be talking about the bullpen...], you can Twitter your questions in.