Share All sharing options for: Diamondbacks 5, Padres 3: Kelly Makes Us the Padres' Daddy

Arizona came into tonight’s game looking to win its first series of the newborn season. Sure, their 162-0 year had been ruined, but there was still a lot to play for, right? I mean, with 160 games left, I guess there’s playoffs and wild cards and other things to consider that might be worthwhile.

After the jump, a sudden outburst of offense for one player who’d been hitless, and another bad luck outing for a starter. What’s different in 2010 so far? We won despite that luck…

Welcome to the Diamondbacks, Kelly Johnson! Mr. Johnson established himself in a big way tonight, going from 0-for-7 with a walk in the first two games to nigh unstoppable. Kelly led off the bottom of the first with a bomb to center field. The offense stalled from there, wasting a lone baserunner in each of the next three frames, including a one-out single by Johnson in the third.

On the mound, Ian Kennedy made his first start for the Diamondbacks tonight, and got off to a rousing start. Working around a David Eckstein double, he struck out the side in the first, including Adrian Gonzalez. His only patch of trouble was in the second, where the first three Padres reached on two base hits and a Scott Hairston home run to put the D-backs in a 3-0 hole. At this point, I feel like we should petition the league to stop Hairston from playing against us. And Randy Winn.

Kennedy settled down after what was essentially his only mistake in the second, working out of trouble in the fourth and setting down the side in the fifth. At 94 pitches, he was pinch hit for in the fifth, which ended up working out – more on that in a minute. Personally, I’m okay with the move, since stretching Kennedy past 100 pitches in his first start seems a little iffy. Opinions varied in the GDT.

Kennedy ended up getting just enough run support not to lose (what’s known around these parts as "being an Arizona Diamondback"), thanks to those runs in the bottom of the fifth. His line was very respectable, certainly something we could get used to seeing out of our No. 4 pitcher – and yes, hope springs eternal that Brandon Webb will return to the living at some point – 5 IP, 6 H, 3 ER, 0 BB, 8 K.

Meanwhile, the Diamondbacks tied things up in the bottom of the fifth thanks once again to Kelly Johnson. With one out, Rusty Ryal pinch hit for Kennedy and reached on a base hit. Johnson promptly deposited a Kevin Correia pitch into the pool area for his second homer of the game. Supposedly, his two jacks combined for at least 800 feet or so – without the benefit of a video feed here in Arizona, I’m going to assume that at least one of them bounced off the moon. You can’t tell me otherwise.

Chris Young was one of the heroes in this one. His homer in the bottom of the sixth proved to be the difference, and CY has gotten off to a pretty good start so far. Justin Upton added an insurance run in the eighth with a bomb of his own.

Arizona’s bullpen locked things down from there for the win. The combination of Norberto, Boyer, Heilman, Gutierrez and Qualls (the worst law firm ever) held the Padres to just two baserunners over the final four innings – a walk by Gutierrez in the eighth, and a hit given up by Qualls in the ninth that he quickly erased with a game-ending double play. And just like that, the Diamondbacks had won the series and were on pace for a 108-win season instead of a 54-win one. Yay, small sample size! 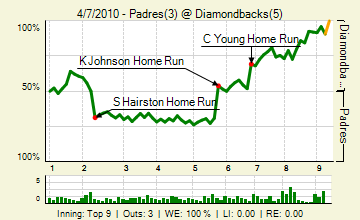 Despite having just nine hits and one walk, a combination of long balls and good pitching was enough to get the win tonight. For the Diamondbacks, Johnson had three hits and added a walk to reach in all of his plate appearances, and Young added a pair of knocks. On the down side, Reynolds and LaRoche were both 0-for-4 with two strikeouts. Hairston had a pair of hits for the Padres, and Gonzalez added a hit and a base on balls. Boyer picked up the win thanks to Kennedy’s bad timing, and Qualls got the save.

It’s a day off tomorrow before welcoming in the Pirates for a three-game set. One would certainly hope that the weekend series could be the start of a series-winning streak. Rodrigo Lopez will get his first start in the opener. So far, it's been a pretty good first week of the season.