Tonight Evil Chris Young was untouchable, and although the Diamondbacks eventually made the score respectable, the Padres were able to emerge victorious. The Boys in Sedona Red just couldn’t catch up with Young’s smoking 85 MPH fastball. You’d be forgiven if you thought the bats had been drilled full of large holes, but the wood wasn’t to blame. Batter after batter fell to the blistering wiles of Young, not even mounting a respectable offensive campaign until the Padres reached into their bullpen for assistance.

By this point the deficit seemed almost too much. Visions of last year floated and solidified in the eyes of every Diamondbacks fan. The Padres had built their lead steadily and over multiple innings, looking the confident team the D’backs were the day before. Two singles in the top of the second by Chase Headley and Nick Hundley set the table for Everth Cabrera to double deep just behind Conor Jackson, who was unable to get the ball back to infield before two Friars came flying across home plate.

A Will Venable solo home run in the fourth inning brought the deficit to 3-0. Edwin Jackson gave his best effort and lasted through the fifth without giving up anymore runs.  There is a bit of irony in the DIamondbacks trading Max Scherzer, a flamethrowing pitcher who could barely go 6 innings, for Jackson who is flamethrowing pitcher who only made it five innings.  Leo Rosales was brought in to hold the line in the sixth, and managed to get two outs in between giving up a single and a walk to put Headley and Hundley on again. Unfortunately for the Diamondbacks, Cabrera was up again, and he banged a triple off the center field wall to tack on two more RBIs for the day. 5-0.

Though Evil Chris Young continued to dominated the Diamondbacks through the sixth inning, he was taken out in favor of Luke Gregerson. Suddenly the home team remembered that they were playing the Padres, and mounted their first truly respectable offensive inning of the game. Miguel Montero led it off with a quick single, and Good Chris Young fouled a couple pitches off before doubling him home. Tony Abreu was brought in to pinch hit for Blaine Boyer, who had replaced Rosales on the mound, and he joined in with a single of his own. Conor did what he does best and took a walk to load up the bases with one out for Stephen Drew. He took strike before bringing Young home with a RBI ground-out. Suddenly the deficit didn’t seem so bad. Two were in scoring position with two outs as Justin Upton came up, script in hand with him cast as the hero.

By this point the Padres were on their third pitcher of the inning, Mike Adams, but he couldn’t even get Upton to look at one pitch before he slapped an infield hit to score Abreu. 5-3, Arizona, and men were on the corners with two outs for Adam LaRoche. Poor LaRoche. Up to this point he had been kept hitless. This at bat wasn’t to be his redemption, he will have to wait for another day. The first pitch floated across home, and he flied it to left. Rally over.

The Diamondbacks would mount a second effort in the eighth inning, getting Montero and Kelly Johnson on first and second, by a single and walk, respectively. Rusty Ryal came up with two outs, looking to bring at least one of his teammates home, or maybe even get the go-ahead run with a homer. The latter must have been what he was looking for; three pitches, three strikes and he sat down swinging.

There was only time for one exclamation point, and Adrian Gonzalez wrote it with glee on his black bat by launching Chad Qualls’ full count offering past the right field bullpen. 6-3, San Diego. Conor Jackson tried to keep the rally alive in the bottom of the final frame with a single, but Drew rolled into a quick double play. Upton fought hard to get a full count, but in a fitting end to the game, struck out swinging,which was the team’s eighth strikeout of the game.

It was a frustrating game to watch, and the few people in stands must have felt the same way. Edwin Jackson was good, sometimes very good, but a few mistakes were amplified by the Diamondbacks inability to start any offensive momentum, let alone sustain any. By the time things started going for Arizona, it was too late. A familiar end to a story on endless rerun last summer.

Upton and Montero continued their hitting ways, both getting two hits. And Edwin’s fastball scorched the earth. Unfortunately, LaRoche continues to show his early season form is less than desirable, perhaps warranting a lower spot in the lineup. Johnson also has yet to get a hit, and Chris Young hasn’t been much better. All the players will need to contribute if the Diamondbacks want to see any real push this season. Luckily, though, it is still too early to make much predictions. I could cherry-pick games last year that would make the Diamondbacks seem like the best team in the league, and then find others that show it was the worst. What remains to be seen is what do the 2010 Diamondbacks look like on the long term? Hopefully it resembles more Monday’s team than today’s 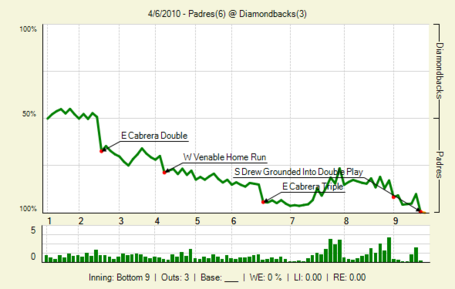 At Least He Made Defensive Plays: Stephen Drew -14.2%

Tomorrow sees the Diamondbacks finishing the first series of the year, with our own Ian Kennedy facing off against the Padres' Kevin Correia.  Look for one of the teams to score 3 runs and the other 6, though exact details are still being finalized.  Tune in for first pitch at 6:40 AZ time (PST), so be here or be quadrilateral.