Diamondbacks 6, Padres 3 - Arizona Starts the Season with a Roar

Share All sharing options for: Diamondbacks 6, Padres 3 - Arizona Starts the Season with a Roar

Winter is now officially over. Beneath the high afternoon sun and the bright blue sky, on the vivid green grass and among 49,000 red- and white-clad fans, Opening Day baseball arrived. With new faces and new optimism, Dan Haren and the Diamondbacks faced off against the division rival Padres and former teammate Jon Garland. The Diamondbacks had an opening day win streak going back to 2007, and with our staff ace on the mound and the roof open (just to irk Garland, I'm sure), all signs pointed to yes.

After Kurt Warner threw out the ceremonial first pitch, Dan Haren threw out the real first pitch - a strike to Tony Gwinn Jr., which lead to his first strikeout of the season.  He retired the side easily enough (a frequent occurrence today) and we headed to the bottom of the first inning, where it was clear from leadoff batter Conor Jackson's deep fly ball out to center that today was going to be a busy one for the outfielders. Stephen Drew singled up the middle and Justin Upton followed with another ball up the middle that was bobbled and both runners were safe. Garland was rattled and slowed the game down to a snail's pace with frequent step-offs, throws to first, and fakes to second. New Diamondback Adam LaRoche struck out, but with two outs, Garland walked Mark Reynolds to load the bases for Miguel Montero. Miggy smoked the ball to right center for a double to give the Diamondbacks a 2-0 lead.

The third and fourth innings brought more offense from Arizona. With Upton on first and two outs (including another K from LaRoche, who did not look good the plate today), Reynolds hit a 386-foot bomb to the bleachers in left. The fourth inning featured two plays you don't see very often. Dan Haren was trotting to first on a ground ball when San Diego first baseman Adrian Gonzalez simply zoned out on the play and dropped the throw from the third baseman. This set the stage for two more runs to cross the plate. Again with two outs, Stephen Drew drove a ball to the deepest and strangest part of the ballpark - the overhang in center field. The ball ricocheted off the corner and rolled way past the center fielder as Drew rounded first.... then second.... then third....! Finally, rookie left fielder Kyle Blanks tracked down the ball, but by the time he relayed it in to David Eckstein, Drew had crossed home plate with an inside-the-park home run. Stephen becomes the 6th player in Diamondbacks history to have an inside-the-park-er, and only the second to do it at Chase Field. (Luis Gonzalez, who was at the game a mere few rows in front of DBacksSkins and katers, was the other.)

Jon Garland was out of the game after that fourth inning. That concluded the scoring for Arizona today, but not for the Padres. Chase Headley's double in the second inning was the only hit Dan Haren would allow till the 7th inning. Dan Haren had retired 16 batters in a row when he allowed a double to Gonzalez, followed by a single by Headley to cut the score to 6-1. Haren's final line today: 91 pitches in 7 full innings: 3 H, 1 R, 0 BB, and 4 K. Then came the dreaded 8th inning, at the start of which, broadcaster Daron Sutton ever so kindly pointed out was the Achilles Heel of the team last year. Not so this year; off-season acquisition Aaron Heilman had a very nice 1-2-3 inning against Hundley, Evereth Cabrera and the newly svelte Matt Stairs. Heilman's pitches had quite a lot of movement, and he used all corners of the strike zone. With a 5-run lead, former Cub and Giant Bob Howry came in for the 9th. Gwinn Jr. and David Eckstein would fly out quickly for two outs... but the next two batters also flew out rather quickly: out to the fans, courtesy of solo home runs to left field (Gonzalez) and to the overhang in center (Blanks). Suddenly it was 6-3, we were warming up our "Get Wailord" cries, and pitching coach Mel Stottlemeyer Jr. got on the horn to the bullpen to warm up Chad Qualls. But fret not, a line drive to second baseman Kelly Johnson ended the game and sealed the first win of the season for the Arizona Diamondbacks. 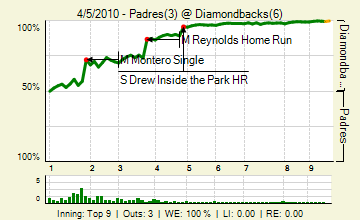 A very strong showing in the gameday thread for opening day - despite some of our more prolific commenters at work or school or sitting 10 rows behind home plate, we still needed an overflow thread and topped 1,200 posts on the afternoon! (400 of those were before the game even started.) kishi led the way with nearly 200, and 3 others of us were in the triple digits. The official roll call (taken shortly after the final out) is as follows:

With the opening day win streak now at 4, the rest of the season looks good. Conor Jackson is back at full strength after his bout with Valley Fever last year; Drew, Upton, Montero each had two hits on the day; and Reynolds smacked the first home run of what is sure to be many. Chris Young was 0-for-4 but looked better at the plate; newbies Adam LaRoche and Kelly Johnson also had oh-fer days, but they know they will not have to carry the offense on their own. Dan Haren was dealing, Heilman had a solid outing, and once Howry learns not to allow back-to-back home runs with two outs, I'm sure he'll be fine too.

Hope springs eternal when everybody sits at 0-0 to start the season. But if today is any indication, there is good reason to hope for good things from this 2010 season. Welcome back, baseball!!

Around the NL West, the Los Angeles Dodgers took a beating at Pittsburg this afternoon, losing 11 to 5. The Colorado Rockies held on to a 5-3 win over the Brewers in Milwaukee, and San Francisco currently leads the Houston Astros 5-0 in the bottom of the 8th.

And in other minor notes, since Jim & I will both be out of town this weekend, any suspicious users and comments - like the spambot I just deleted from the overflow thread - should be pointed out to DbacksSkins and soco, whom you'll see at the bottom has been made an editor for the weekend.