Book Review: "The Funniest Baseball Book Ever". Well, is it?

Share All sharing options for: Book Review: "The Funniest Baseball Book Ever". Well, is it? 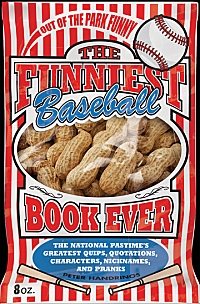 This is one of those books that one feels could really only be written about baseball: hard to imagine filling 350-plus pages covering quotations from NFL linemen, NBA nicknames and pranks by hockey players. While I'm sure they exist, they're notable by their rarity, compared to baseball, which seems to generate these kind of elements with a frequency that borders on the disturbing. Peter Handrinos has embarked upon the task of putting together a collection of what he considers the most memorable.

After the jump, we'll see how he has done.

This is one of the books where the label "by", is somewhat inaccurate, since what Handrinos has done, for the most part, is take quotations from other sources, and organize them into various categories, such as - and I'm picking randomly here - Intangible, Babe Ruth and The Church of Baseball. Not that there's anything wrong with this as an approach; let's face it, my spring training recaps made heavy use of Ctrl-C and V, so I am hardly in any position to criticize. Not that it's much of a criticism here either, because the amount of work involved, simply in putting together the thousands of quotations, etc. present in this collection, is undeniable and laudable.

In addition to the collecting of other people's wit and wisdom, Handrinos has also included sections on the most interesting nicknames and the 20 greatest pranks of all time. The former explains the reasons behind them, but inexplicably, leaves out what is to me undeniably the finest of all time: Bob 'Death to Flying Things' Ferguson, the first switch-hitter, who got the name in the 19th century, due to his defensive prowess. Still, plenty of other unusual candidates are to be found, such as Austin McHenry, likely the only position player to be nicknamed "Fireman" because he raised the alarm one night when the ballpark in St. Louis caught ablaze. As for the pranks, let's just say I'm glad those at my place of employment are not so inclined.

Handrinos also includes extended profiles of some of the game's larger-then-life characters, such as Casey Stengel, Bill Lee, Luis Tiant and...Manny Ramirez? Let's say, I'm not quite convinced I'd agree with his description of Ramirez as "eccentric," but he makes a case, saying that Manny's approach is "an affable approach to a hyperserious business, an idiosyncratic refusal to buy into stifling conformity, a throwback ballplayer's scoffing at the assumption that he has to act like some kind of buttoned-down company man." An alternative explanation is that Ramirez is a Grade-A jerk who believes that the rules just don't apply to him: see last year's suspension for details. You say potato...

All told, it's not really a book that one would sit down and read, but much more one into which you would dip from time to time. I've had it sitting on my desk in the office, and been picking it up while rebooting the computer or while waiting for stuff to download (er, open-source software, naturally...). It also would work just as well in the bathroom, since there's no real narrative structure, though I have not tested how well the pages hold up to condensation and splashes. Is it "The Funniest Baseball Book Ever"? A bold assertion. But certainly, Mrs. SnakePit will testify that it provoked more than enough snorts to justify some credible claim to the title.

I'll close with some of the Diamondbacks' related entries in the book, which might give you a flavor of what to expect.

"He does all the pitching, I do all the talking. I’d call it a good relationship."
-Tom House, on coaching Randy Johnson

"Of all the adjectives one might use to describe Curt Schilling, 'likable' would rank down there with 'svelte', 'shy' and 'Japanese'."
- Will Leitch

"Orlando Hudson Just Striking Out To Crack Up Teammates..."
-The Onion

"Brenley presumably was worried that New York would go to the shotgun and hurry-up offense."
-Tom Verducci, on Bob Brenley’s refusal to pull Randy Johnson during a 12-0 game