Another game in Chicago, another day of adventures in the wind. After yesterday's trouncing of the Cubs with four home runs and 13 runs, would Arizona's hitters be able to take advantage again? It appeared so, as the Diamondbacks got off to a 3-0 lead in the 4th inning and Rodrigo Lopez was pitching very well. But defensive miscues and a little thing called the bullpen contributed to two big innings for the Cubs, and Arizona went on to lose the game by a score of 11-5.

Today's matchup started off evenly for both sides. After the first three innings of the ballgame took barely 45 minutes to finish, it looked like we were well on our way to an easy game that would be finished by the end of peoples' lunch breaks. Rodrigo Lopez was averaging about 10 -12 pitches per inning and the Diamondbacks had given him a lead to work with. In the 4th inning off of Cubs starter Randy Wells, Stephen Drew doubled to lead it off. He scored on Mark Reynolds's double, who scored on Gerardo Parra's single, who then scored on Cole Gillespie's double. Our fears of needing to score runs by the long ball were abating, and not-quite-small-ball was proving successful.

Kosuke Fukudome answered with a solo shot in the bottom half of the inning to break up RodLo's no-hitter, and the offenses exchanged runs again in the 5th - a double by Drew and he would score to make it 4-1, then a double by Soriano and he would score to make it 4-2. Still, Lopez's pitch count was decent (68 after 5 innings), we had Wells on the ropes (83 pitches after 5 innings), and the game seemed under control.

Then came the unravelling of the 6th inning. It started with leadoff singles by Ryan Theriot and Fukudome; two on and nobody out is never a good start to the inning. Lopez got Derek Lee to fly out to Justin Upton and even got Aramis Ramirez to pop up to the infield. Lopez tried to stay in the area to catch the pop-up, Adam LaRoche came in from first base, and Mark Reynolds and Stephen Drew converged as well. Who ended up catching it? If you guessed "nobody", you would be correct. A dropped pop up loaded the bases. Lopez had been pretty decent at inducing ground ball double plays this season, but not today. A sacrifice fly shortened the Diamondbacks' lead to 4-3, but then a 3-run home run to Alfonso Soriano gave the Cubs a 6-4 lead. One play - a popup to the infield that was dropped - flipped the game on its head.

Chris Snyder did lead off the 7th inning with a solo home run to right field to bring the game within one, but that was the end of the Arizona offense. Chicago would tack on three more runs in the 7th inning courtesy of four walks from Blaine Boyer and Aaron Heilman - two walks with the bases loaded - in another abysmal outing from our relief core. Further proof of their incompetence, Diamondbacks pitchers have allowed 7 walks with the bases loaded, which leads MLB. Newly recalled Kevin Mulvey allowed back-to-back home runs in the 8th to cap Chicago's scoring at 11 runs on the afternoon. Arizona threatened in the 9th by getting two runners on, but Drew and Upton both struck out, and thus endeth another Diamondbacks game. 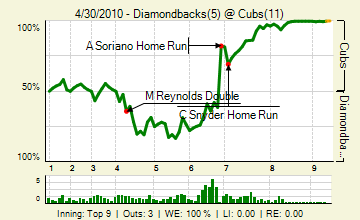 Lopez's suckitude most likely comes from his own error on the pop fly in the 6th. Had that been caught, the score likely would have stayed 4-2, Lopez would have pitched longer into the game (through 6 innings, he was only at 89 pitches), and hopefully the A-bullpen could've nailed down a win. Although one never knows in this game, that truly was the key play of the game. Boyer continues to have major control issues - in his last 2.1 innings pitched, he's allowed 5 hits, 7 walks, and 5 runs. Kevin Mulvey's two home runs in his return to the big leagues was not the outing the team needed. All the writers are saying Mulvey is just here for relief this weekend, so expect more reinforcements to come up Monday when we need a 5th starter. Somebody decent this time, one would hope.

There's actually some good news from the broadcast today about all the injuries. Miguel Montero was on the air during the game; he's been stretching, biking, and playing catch, but not hitting yet. Kris Benson's MRI revealed no structural damage; Conor Jackson should go out on a rehab assignment for a few days next week; and Brandon Webb is expected to start throwing off of a mound when the team returns home from the road trip. 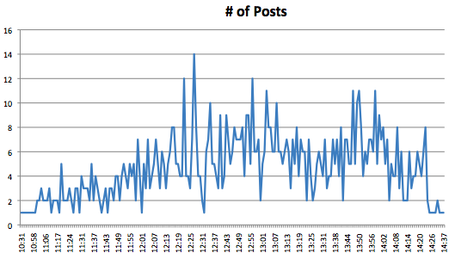 That's all for today. Be ready to get up early tomorrow, folks: 10AM start on a Saturday morning, lovely.