Adam LaRoche and Kelly Johnson took it to Ted Lilly and the Cubs this afternoon - Lilly didn't throw his glove about, but that might have been his best hope of catching the ball. The right-side of the Arizona infield combined to go 7-for-9, with eight RBI and three home-runs, while Ian Kennedy gave the bullpen a welcome break, with eight solid innings (less one sympathy pitch). The Diamondbacks matched their biggest winning-streak of the season - that'd be "two" - but got their record back to even for the first time since April 16th.

Details of this laugher after the jump.

If you had any doubts about this team being defined by the offense, here's proof. This season, when Arizona scores more than five runs, their record is 9-0. When the Diamondbacks score less than five runs, their record is 0-9. It's clear how this team wins games, and it isn't by stopping the opposition from scoring. Only once in the first 22 contests has our pitching staff held the opposition to two runs or less - contrast the Mets and Giants, who already have eleven such games each. It's quite a startling turnaround for the Diamondbacks, who have traditionally relied on pitching for their victories.

It's also good to note that we did it without any significant hitting by Justin Upton and Mark Reynolds: they combined to go 0-for-6, but drew three walks and scored three runs. Indeed, everyone in the line-up bar Kennedy crossed home-plate, and even he chipped in with an RBI sacrifice fly during the seven-run seventh that really put the game beyond reach. While it certainly didn't feel much like it, this one will count as a come-from-behind victory for the Diamondbacks, for the Cubs got on the board first, with a HBP, bunt and RBI single giving them the lead in the third, after Kennedy had held them hitless the first time through.

However, Arizona hit right back, and Lilly must have been forgiven for suffering deja-vu, as the Diamondbacks used his old nemesis - the three-run homer - to take the lead. That came after back-to-back walks to Upton and Reynolds, and Chris Snyder made the score 5-1 with a two-run shot later in the frame, after Cole Gillespie had doubled. LaRoche added his second home-run of the day in the fifth, but the Diamondbacks really piled on in the seventh, after Lilly had been driven from the game, sending eleven men to the plate. There were RBI for LaRoche, Gillespie, Snyder and Kennedy, but the big blow was Johnson's three-run homer - at that point, the score was 13-1, and we were on course for the biggest defeat on the Cubs at Wrigley in four seasons.

Meanwhile, Ian Kennedy was pitching well, though allowed a few too many fly-balls than I would really like, especially when the wind was given in the box-score as 27 mph [bringing back memories of a previous game at Wrigley, where Arizona hit a club-record six homers]. Kennedy's GB/FB ratio was 7:10, but he simply did a much better job of keeping the ball in the park than Lilly and his stand-ins. Well, at least until the eighth inning, where Kenndy began to flag, but the day after our bullpen worked eight, we'll take four earned runs on six hits and a walk, with six strikeouts.

A walk, an error by Rusty Ryal [AJ Hinch took the chance to rest some regular in the late innings], a single, and Fukudome knocked out the first grand-slam off a D-backs starter since Micah Owings allowed one to the Royals' David DeJesus on June 15, 2008 - Leo Rosales and Clay Zavada both allowed relief slams in between. Still, if you have to give up a slam, up 12 is the time to do it, and Kennedy ended the eighth without further problem. The ninth saw the major-league debut of Daniel Stange, called up from Reno to replace Rosales, who went on the DL with a sprained foot. Steve Gilbert reports Leo "had been experiencing pain in his left foot since the team's series in San Diego, but had been attempting to pitch through it while having his foot wrapped." Stange pitched a perfect frame.

The game marks only the third time in franchise history that we have scored a dozen or more runs in consecutive games. The first time was September 26-27, 2001, when we beat the Brewers 15-9 and 13-11, and the second was June 17-18 last season, when we doubled up on the Royals, 12-5. Let's hope the latter is not an omen, however, since Arizona then lost eleven of their next thirteen contests. It also extends our overall mastery of the Cubs, to a regular-season record of 53-36; that only trails the Pirates in terms of winning percentage for Arizona, against other National League franchises. 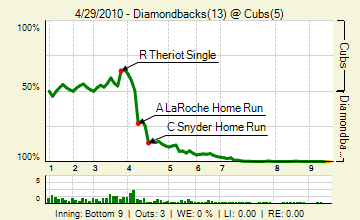 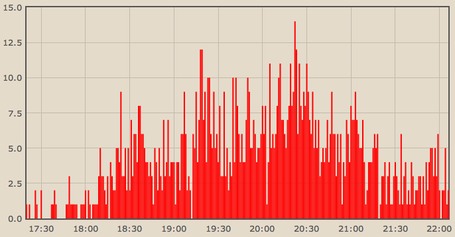 Think I might watch the repeat tonight: it's great to watch us murder the Cubs, and a good deal less stressful when you know the result...